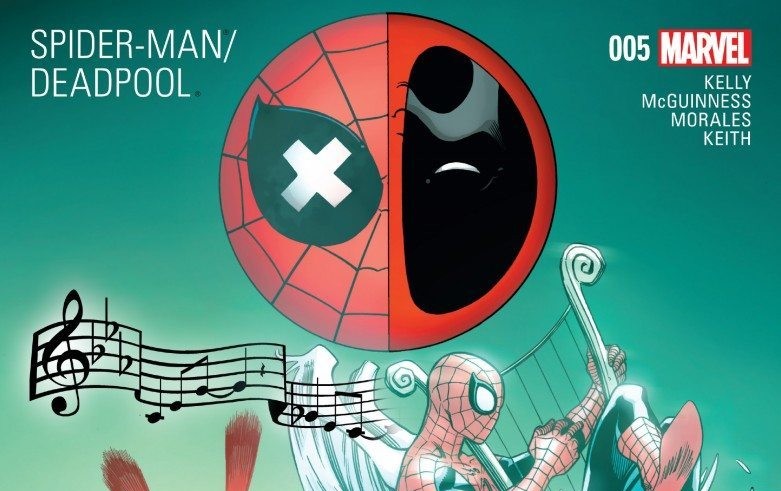 The bromance continues for the similarly dressed duo in SPIDER-MAN/DEADPOOL #5!

In the last issue, Deadpool decided to solidify his friendship with Spider-Man by taking him out on a double date and a super-powered mud wrestling match. Things didn’t go as planned, but the heroes shared a bromantic moment in the form of dance. At the end of the night, Peter Parker found himself at the not-so-fun end of Deadpool’s pistol. Without hesitation, Wade fulfilled his contract and shot Parker between the eyes.

After SPIDER-MAN/DEADPOOL #4, I initially assumed that Spidey wasn’t really dead. Maybe it was some illusion or some kind of life model decoy scenario, but I was dead wrong. With Parker murdered, the story in SPIDER-MAN/DEADPOOL #5 takes an unsuspected turn and spends most of the issue in purgatory. Normally, I don’t like when characters not normally involved with magic or the supernatural end up in these situations, but it works well in this series, especially with the involvement from Deadpool’s wife, Shiklah. It’s with her aid that Deadpool is able to head into purgatory to save Peter. 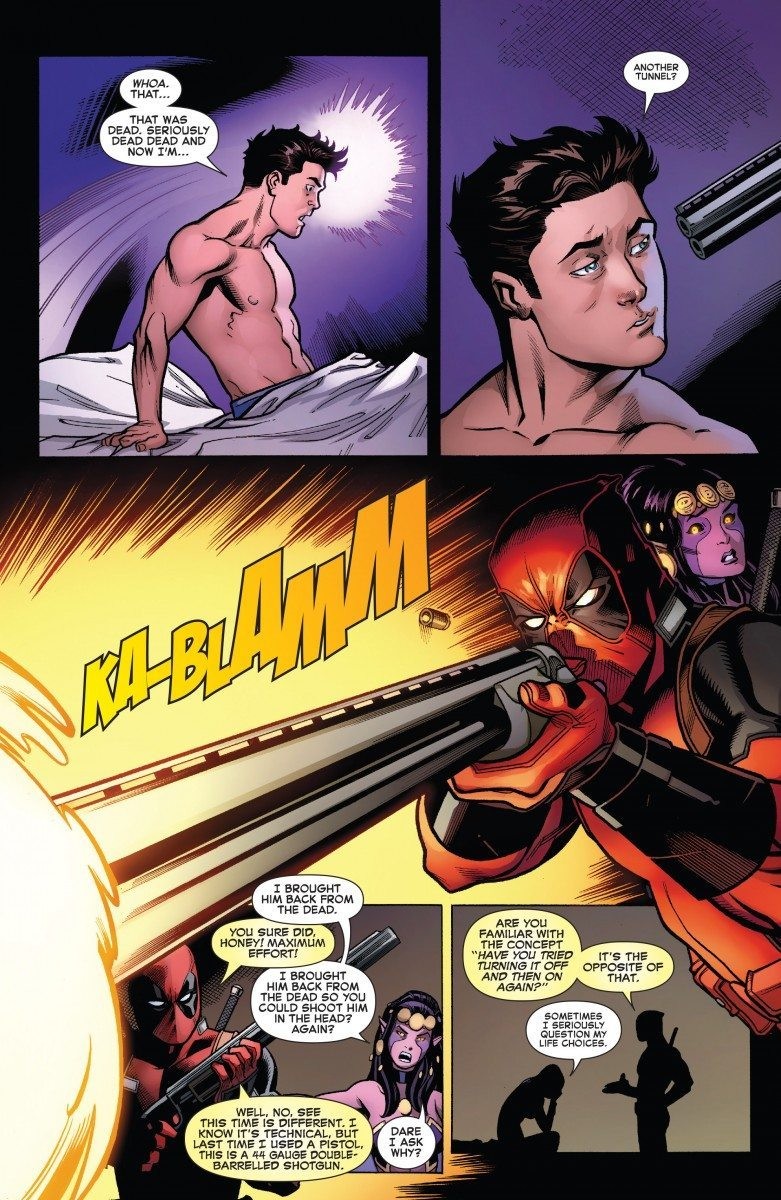 Joe Kelly adds a lot of depth to Wade Wilson in SPIDER-MAN/DEADPOOL #5. Early in the issue, Deadpool wants to torture Parker’s soul with the help of Shiklah’s minions. It’s a fantastic reminder of his brand of sadistic heroism, juxtaposed against Spider-Man’s softer approach. This story is also an interesting shift from what we’ve seen in the past: Normally, Wade would just shrug his shoulders and dismiss mistakes like these, but here he moves closer to the type of superhero Spider-Man is. The change is believable since it seems like Marvel is giving the character more heart (e.g. he has a daughter now). I like this direction for Deadpool, and I hope he continues to evolve in this way. (Of course, I hope he doesn’t stop his murdering style.)

As for Spider-Man, Kelly does a great job showing his resolve. While in purgatory, Peter is faced with multiple illusions that are meant to destroy him emotionally and physically. At one point, Uncle Ben shows up and confronts Peter, but instead of giving in, Spidey fights through the mirages.

READ: Deadpool has friends?! Well, technically they’re employees, but learn more about DEADPOOL AND THE MERCS FOR MONEY here!

Ed McGuinness’s art is also very impressive in SPIDER-MAN/DEADPOOL #5. Alongside Deadpool and Spider-Man, McGuinness is tasked with showing a number of difficult characters in this issue, including Mysterio and Shiklah, and he does an incredible job. The artistic details are especially effective in showing the characters’ emotions through their masks. The settings in this issue are also challenging, with the panels moving from Shiklah’s underground kingdom to the real world and then to a fantasy world/purgatory. There is a lot going on in these panels and McGuinness captures it all so well, especially the beautiful action scenes. 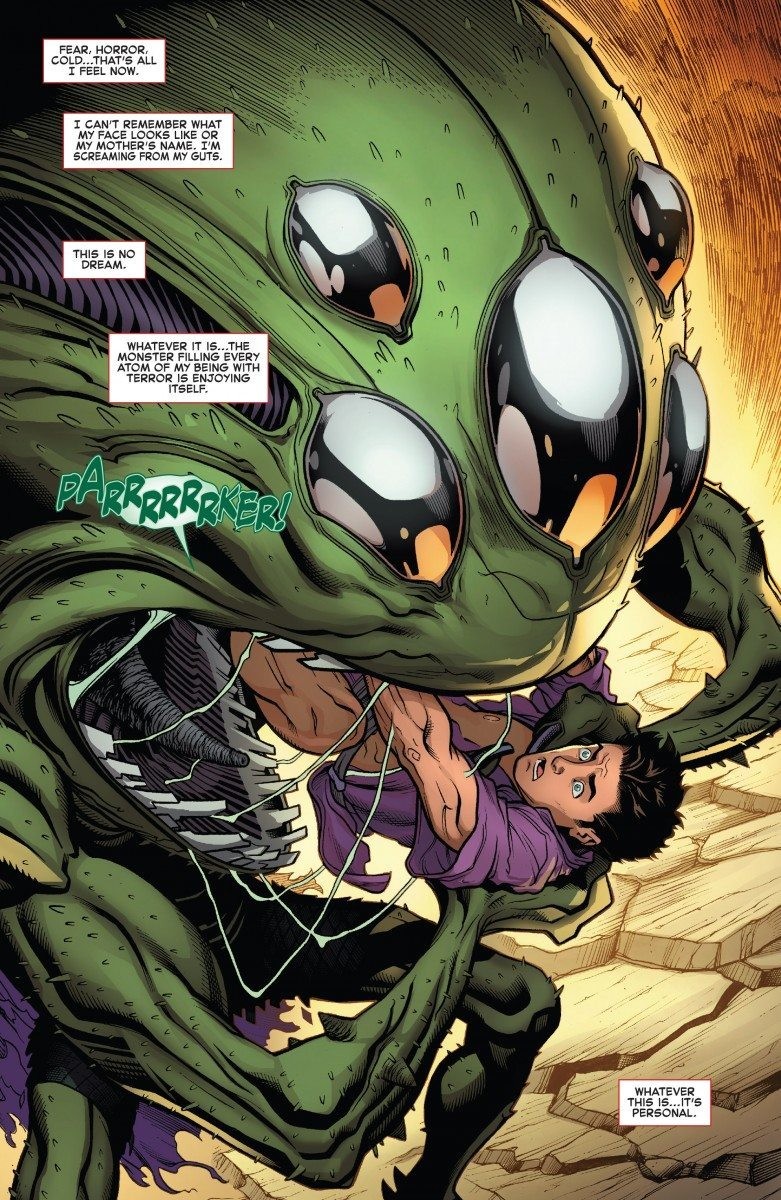 Overall, the issue is a strong addition to the series. The story in the series so far has been fun with the antics and banter between Spider-Man and Deadpool. SPIDER-MAN/DEADPOOL #5 is a huge turning point for the series as a whole with the first four issues building up to this story turn. Starting with the next issue, we should see Deadpool and Spider-Man joining forces for some web-slinging and gun-blazing action.