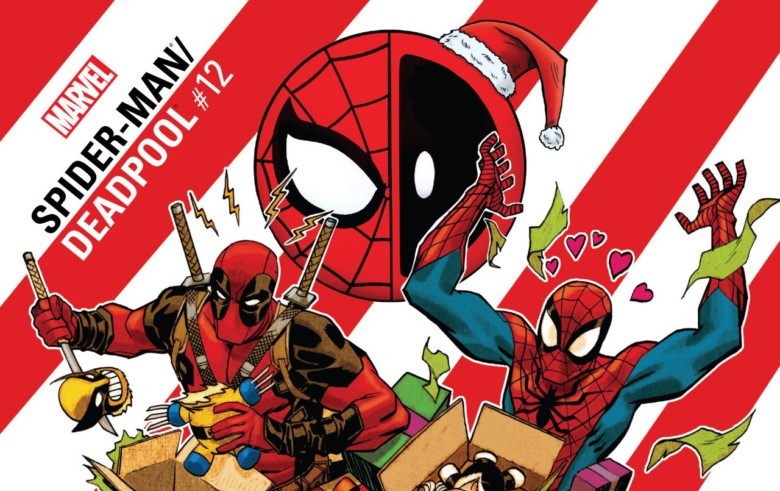 Guess who came to town over the holidays? If you’ve guessed Santa, you’re technically right! The Ho-Ho-Holiday season has passed, and Spider-Man and Deadpool were on the top of 2016’s Naughty or Nice list. Although the Marvel superheroes did not make plans with each other, a Christmas miracle gets them together in SPIDER-MAN/DEADPOOL #12.

Despite being close buddies, Spider-Man does not get an invitation to Deadpool’s unofficial Avengers Christmas party in SPIDER-MAN/DEADPOOL #12. In the wintry night, a dejected Spiderman peeps through Deadpool’s window as he spends the holiday alone. Meanwhile at Deadpool’s party, current and former Avengers exchange presents. Deadpool is Hawkeye’s secret Santa, but thinking Hawkeye is Clint Barton, he accidentally gets Kate Bishop an extremely insensitive present. Shocked and disgusted, the Avengers kick Deadpool out of his own party.

READ: Need to catch up? See our SPIDER-MAN/DEADPOOL #10 review!

As Deadpool walks out of his home, he runs into Spider-Man, and the two briefly talk about how they ended up alone on Christmas. Instead of hanging out together, they both decide to wander off by themselves and to reflect on their own lives. At that moment, a tall and fit Santa appears and begins to destroy everything. He claims to be Saturn, a Roman god in Greek mythology, who was honored in a holiday named “Saturnalia”. 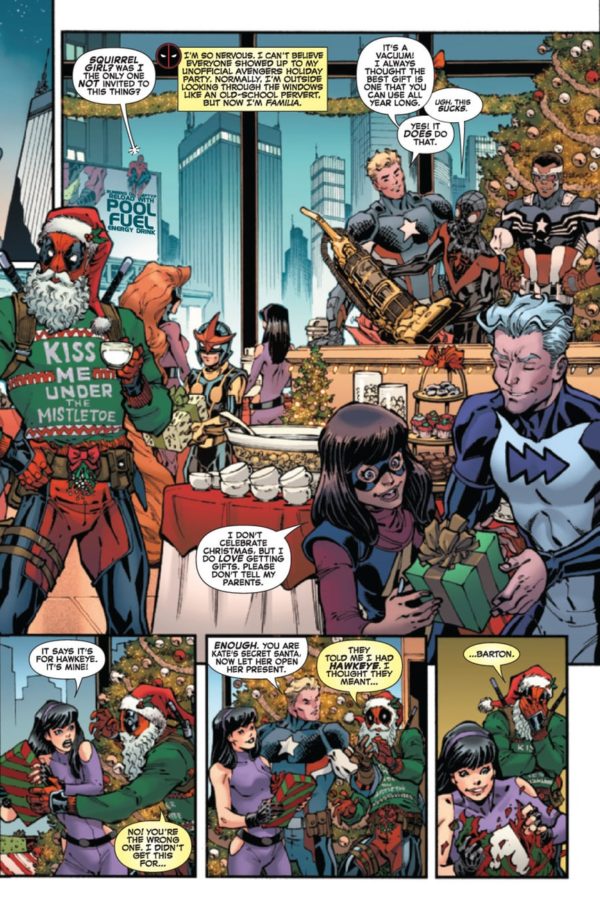 Saturnalia was celebrated by feasting, exchanging gifts in private and being generous to the poor, but it was not a children’s holiday. Rather, it was the only time in the year when gambling and drinking was encouraged. Thus, the celebration of Christmas and the commercialization of Santa infuriates Saturn. Spider-Man explains to Saturn that Christmas is not necessarily seen as a religious holiday to many, and the traditions of Saturnalia are actually still alive. To prove it, Spider-Man and Deadpool spend the night with Saturn by dancing, drinking and gambling. They all have a good time, and Saturn realizes that Christmas is actually not bad at all.

What I like the most about the plot is that writers Nick Giovannetti and Paul Scheer create cultural awareness, as it centers around the origin of Christmas and references to the controversy surrounding the black baby Jesus. The overall message seems to be that Christmas is a time for friends and family to get together and enjoy, regardless of religious beliefs.

READ: Who did we pick as the Best Sleeper Hit of 2016? Take a look at our article to find out!

The highlight of the issue is undoubtedly the bromace between Spider-Man and Deadpool. They both have their differences. The former is nice, and the latter is naughty, but they bond in several ways, such as their Christmas wish to get free tickets to Hamilton. Towards the end, Deadpool gets slightly emotional when he tells Spider-Man how much he means to him, and they coincidentally get each other the same present. Saturn is also a highlight of the issue, as he turns out to be just as fun as the duo. Initially, he seems to be an angry psychopath who murders for a living, but he actually doesn’t mean harm. He simply wants to enjoy the holiday. As soon as he understands the true meaning of Christmas, he apologizes to Spider-Man and Deadpool for being a party pooper. Also, he has a baby chauffeur and a flying sled pulled by dragons, which makes Santa and his flying reindeer look plain and boring. 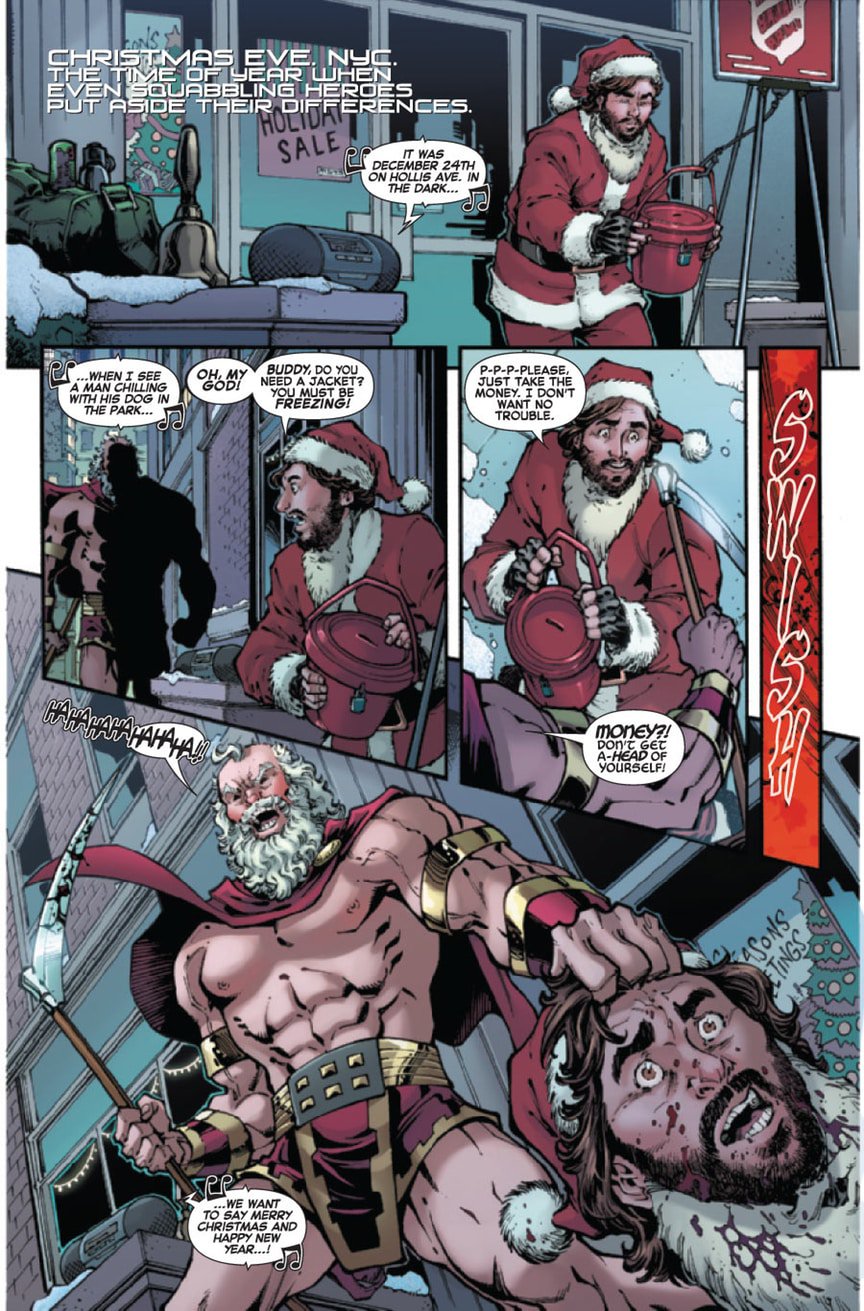 Saturn’s physical appearance adds humor to the issue as well since he seems to be what Santa would look like if he did cross-fit. His facial expressions are well portrayed, especially when his pinky finger is sliced after losing a gamble. His face turns red, and it looks as though he is trying to hide his pain, but he fails to do so.The overall artwork of the issue has a Christmas in New York vibe: a concrete jungle full of holiday decorations, light snow, and a larger-than-life Christmas tree at the Rockefeller Center. As a New Yorker, I believe artist Todd Nauck did a fantastic job.

With the collaboration of Marvel’s funniest superheroes and action from the feisty Roman god, SPIDER-MAN/DEADPOOL #12 is a fun issue to read. It’s action-packed, hilarious, and light-hearted at the same time. Thus, it’s perfect for the holiday season. Also, I like Saturn more than Santa now since the former is much more interesting.