As any Spider-Man enthusiast knows, Peter Parker’s life is no web swing in the park.

Peter Parker is a spectacular example of this. He fails almost daily, often in the most pathetic ways – whether it’s being overshadowed by another superhero, standing up to the wrong villains at the wrong time, or forgetting (or being unable) to pay his electricity bill. It is precisely all these failures, however, that makes his accomplishments all the more rewarding, all the more gratifying and satisfying for the legions of fans around the world who have accompanied him on his amazing journey over the span of 40+ years.

As fans, we are emotionally invested in Peter’s success because he deserves it; no matter the consequences and no matter how tempting the superficial rewards, he never betrays his humility, his honesty, and his integrity as he carries out the responsibilities given to him by this life. He accepts his often unfair lot in life with humble, if maybe clumsy, grace (of course, that doesn’t mean he isn’t prone to complain about or bemoan his circumstances from time to time).

It is exactly this aspect of Peter’s character that makes SPIDER-MAN: ONE MORE DAY the most infuriating issue for me in Spider-Man canon.

CLICK: Looking for a new read? Love Spider-man but want something different? Check out Cindy Moon in SILK!

For those of you who may be unfamiliar with the storyline, SPIDER-MAN: ONE MORE DAY is a 2007 four-part crossover storyline which focuses on the aftermath of Spider-Man revealing his true identity to the world during the 2006 MCU crossover event CIVIL WAR. In SPIDER-MAN: ONE MORE DAY, Aunt May is dying from a gunshot wound she sustained after the Kingpin learns of Spider-Man’s true identity and attempts to have her assassinated for revenge. Peter, desperate to save her, makes a deal with Mephisto and sacrifices his marriage to Mary-Jane in exchange for saving Aunt May’s life. In the process, Mephisto erases everyone’s knowledge of Spider-Man’s true identity and returns Peter’s life back to how it was nearly twenty years ago. 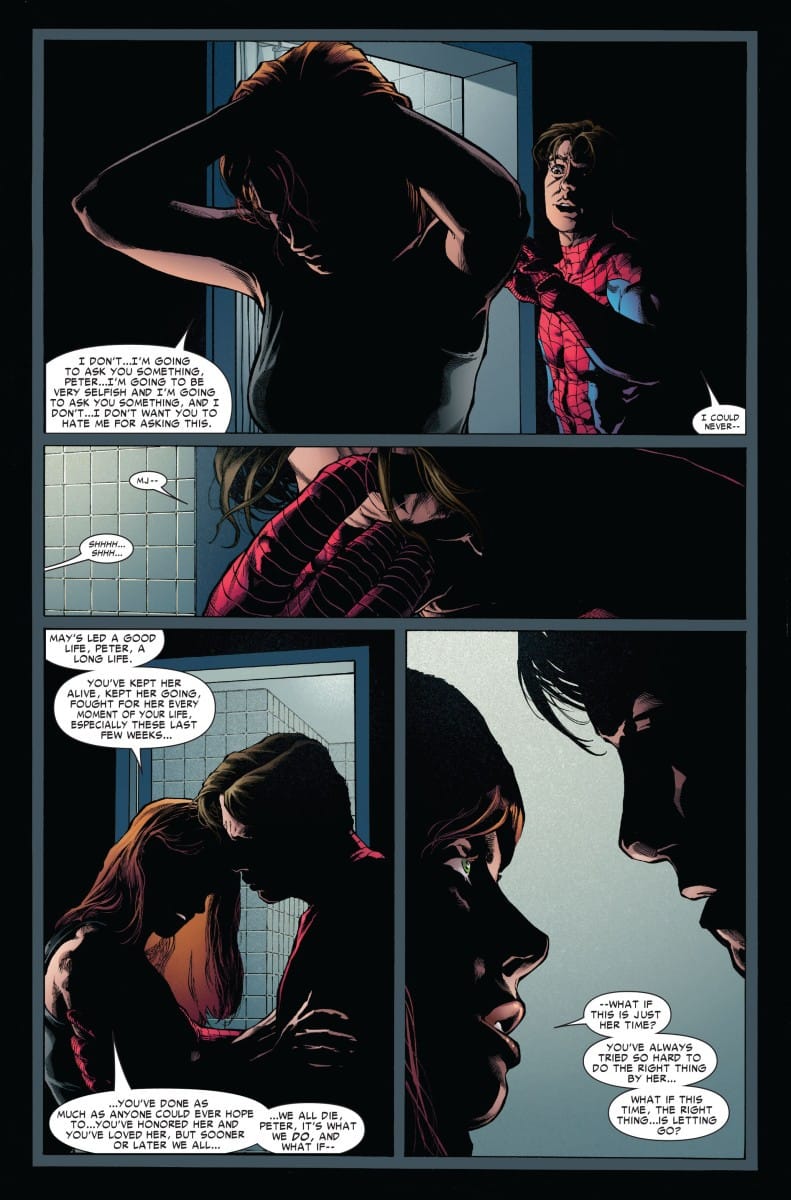 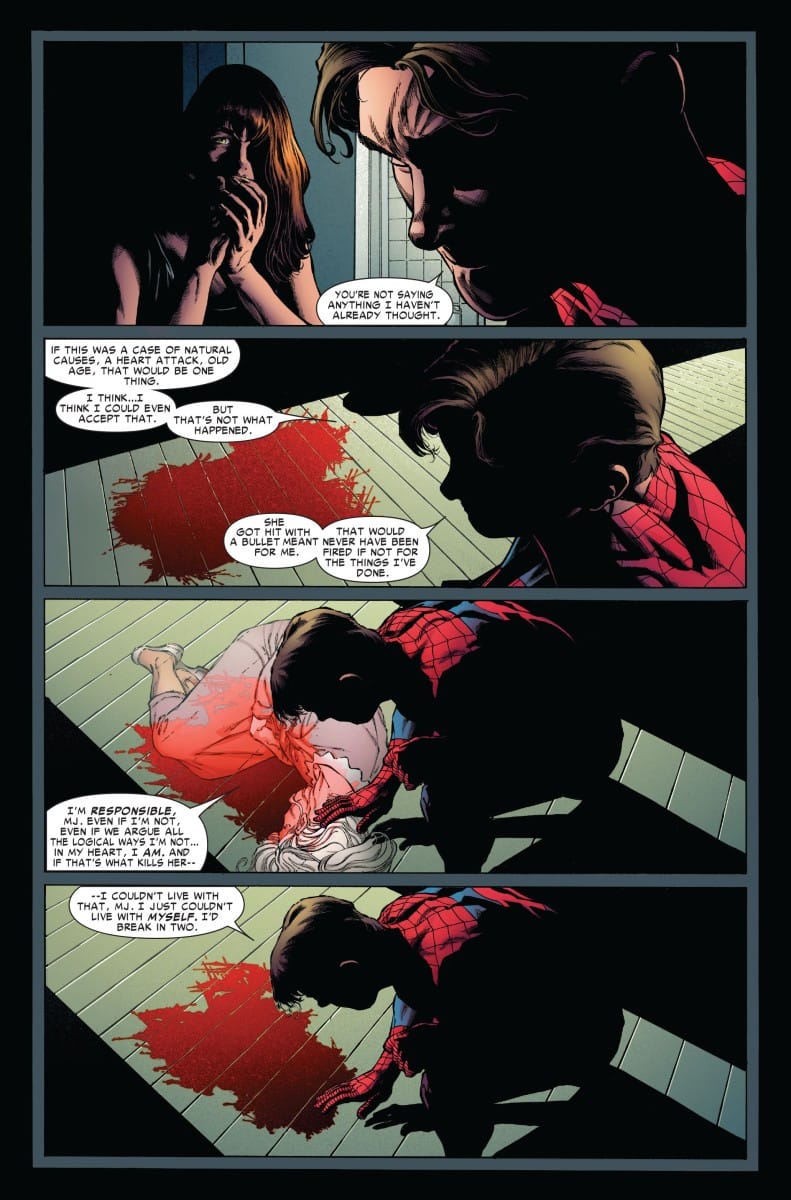 By having Peter be unwilling to accept the consequences of his action, SPIDER-MAN: ONE MORE DAY betrays the single most crucial aspect of Peter’s character. He willingly makes a deal with the figurative devil of the Marvel universe because he cannot cope with the possibility of true and everlasting loss a second time around.

While Peter’s mischaracterization is the most egregious shortcoming of SPIDER-MAN: ONE MORE DAY, it’s not the only one.

SPIDER-MAN: ONE MORE DAY effectively erased 20 years of Spider-Man canon. And this isn’t some side-story or spin-off story set in an alternate universe – this is the titular, 616-universe Spider-Man, the one Peter Parker fans have come to know and love for over four decades.

It is somewhat understandable that Joe Quesada, Marvel Comics editor-in-chief and mastermind behind SPIDER-MAN: ONE MORE DAY, wanted to return Peter to his lovable past, to the days when Peter was an unemployed, unlucky, and (most importantly to Quesada) single dork. We all loved that Peter. There was a need, he believed, to reinvent Peter and make him more accessible to younger and newer audiences. He believed that a married, well-respected, financially stable Peter Parker with a rewarding job as a teacher had no growth potential for the company. There are other ways, however, to make an older, established character fresh for new fans, ways that complement the growth of the character instead of destroying it. 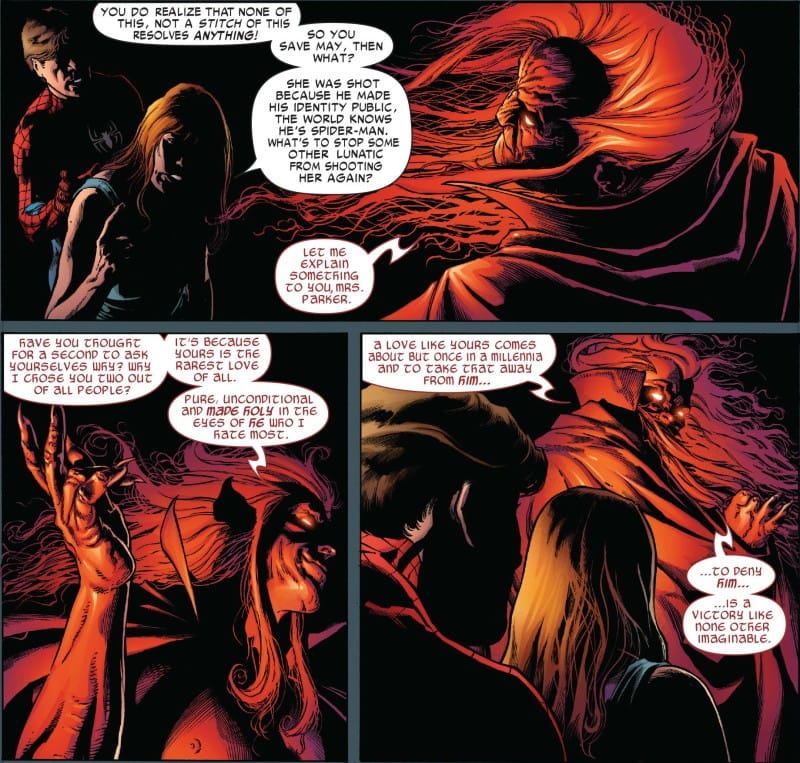 His job title, his socioeconomic status, even his marital status to some extent have always been and can always be transient. They can change depending on the whim of the writer, but the relationships he formed over the years – the validation, the admiration, and the respect of his superhero and civilian peers – those are the fruits of nearly twenty years’ worth of stories and adventures that Spider-Man and Peter Parker have experienced and earned. Those writers deserve to have their stories handled with dignity, and those relationships ought to have been treated with the respect they deserve. 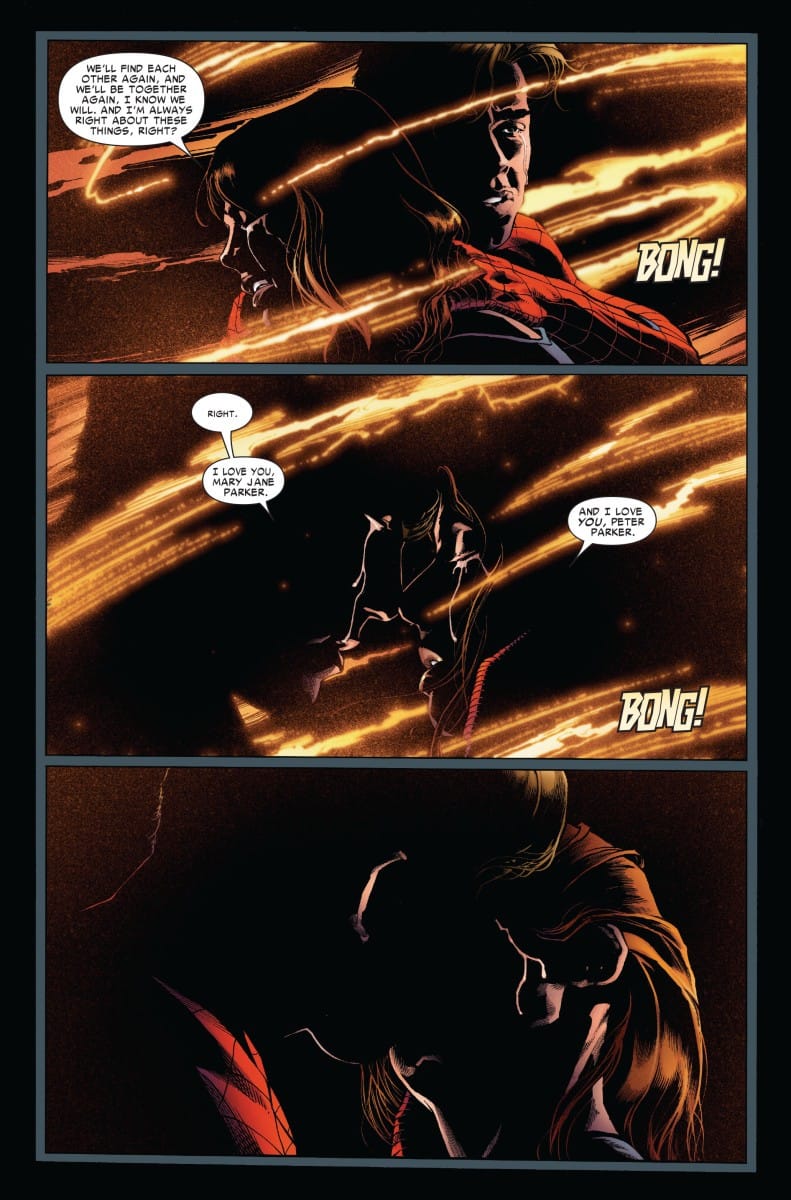 SPIDER-MAN: ONE MORE DAY essentially retconned nearly 20 years of character development, not only for Peter Parker, but also for all the people whom Peter Parker had changed through his actions. Felicia Hardy as Black Cat is a prime example of this total destruction of character. Her relationship with both Peter Parker and Spider-Man is one of the most dramatic and most memorable of the canon, and her growth felt distinctly personal and complete. Initially apathetic and even disgusted by the man behind the mask, Felicia grew to love and admire Peter Parker even more than Spider-Man, and eventually discovered her own unique brand of heroism. Felicia is one of the story’s greatest casualties: she was completely reduced to a caricature of her former self – a convenient love interest of dubious morality and loyalty – and was left with none of the complexities that once made her one of the most fantastic and divisive characters in the whole of SPIDER-MAN canon.

READ: Want to see what Peter and MJ’s life could have been? Check out AMAZING SPIDER-MAN: RENEW YOUR VOWS!

Possibly the most tragic consequence of SPIDER-MAN: ONE MORE DAY is, in fact, all of Peter’s personal and potential growth that was lost in the aftermath. Peter’s potential has always been great; he was just too self-deprecating to fulfill it. Peter was never able to lift Mjolnir, not because he wasn’t worthy, but because he didn’t believe himself to be worthy. But perhaps he was on his way. The self-respect, the self-love, and the validation he had slowly pieced together over the years gave Peter hope for a life with more than self-hatred and guilt as constant companions. As a fan, I found Peter’s slow yet growing acceptance of his own importance, his own relevance, and his own worthiness to be the most rewarding part of his usually uncertain journey. He was finally becoming the superhero he always had the potential to be, to be one of the greats and finally recognize it himself. In light of his greatest trial yet, the writers had the opportunity to create a storyline which would rival some of the best of the Spider-Man canon. Uncle Ben made Spider-Man, but Aunt May made Peter Parker. The transformative potential that her death could have had on Peter’s character development is unparalleled.

Instead, SPIDER-MAN: ONE MORE DAY returns Spider-man, Peter Parker, and the entire AMAZING SPIDER-MAN title back to what Quesada considers the status quo. This, however, is not the status quo, but simply one moment in Spider-man’s forty year history. This version of Peter Parker is simply one of many Peter Parkers to have existed and then be left behind. Why? Because characters – people – are not static; they change and grow and evolve over time. 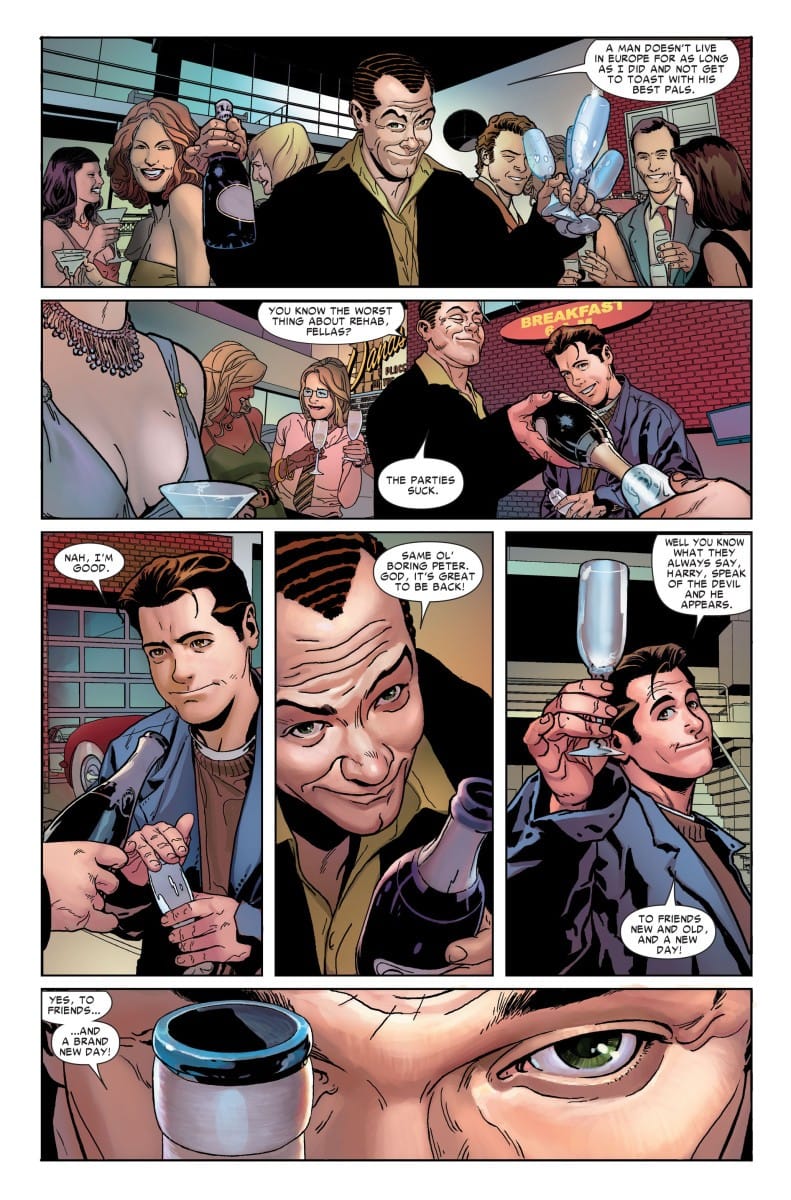 All those spectacular failures, all those moments of triumphant successes, and all the milestones of Peter’s life erased for the sole purposes of what? Making him the lovable, pathetic, self-loathing dork we already knew and loved? Been there, done that. Peter Parker deserves to grow into the superhero we all already know him to be.