With FATE OF THE FURIOUS kicking off Hollywood’s blockbuster season, July 7th is fastly approaching, and with it the latest installment of our favorite web-slinger in SPIDER-MAN: HOMECOMING. However, don’t get too hyped just yet. There are many similarities between this version of Peter Parker and the SPIDER-MAN (Miles Morales) comics. This is problematic.

What We Know about SPIDER-MAN: HOMECOMING

If you’ve seen the SPIDER-MAN: HOMECOMING trailers, then you have the SparkNotes version of the film. All three trailers give us an introduction to Peter Parker (played by Tom Holland) as a high schooler. We know his love life, the villain, the “with great power comes great responsibilities” schtick, and his mentorship under Tony Stark.

All things considered, SPIDER-MAN: HOMECOMING is a fresh take on Spidey. The film takes out old storylines, such as Uncle Ben’s death and the over-played Osborn family drama. HOMECOMING instead offers more characters of color, a high school Peter, and a Spider-Man that is a part of the Marvel Cinematic Universe (MCU). We can also be grateful that actors Michael Keaton and Marisa Tomei are playing the Vulture and a Aunt May, respectively.

READ: How much is too much? SPIDER-MAN: HOMECOMING trailers show a bit too much!

Since Sony and Marvel aren’t rehashing classic material, they naturally need new inspiration. Their source of inspiration seems to be Brian Michael Bendis’ SPIDER-MAN (Miles Morales) comics. This drew the ire of the Bendis comics fans that want to see their Spider-Man on the big screen, not aspects of his story. These similarities between Miles and Peter hurts Miles more than it helps make freshens Peter.

Ned and Ganke are a notable “coincidence” between HOMECOMING and the SPIDER-MAN (MILES MORALES) comics. Ned is Peter Parker’s closest confidant and the first person to discover his identity. Ganke does the same for Miles. Ganke is a lovable Asian-American gamer who fanboys every once in a while — so is Ned. Ned and Ganke are both comic reliefs to their Spider-Men. Even the actor playing Ned, Jacob Batalon, looks like a real-life Ganke. Ned’s name should be Ganke Lee. 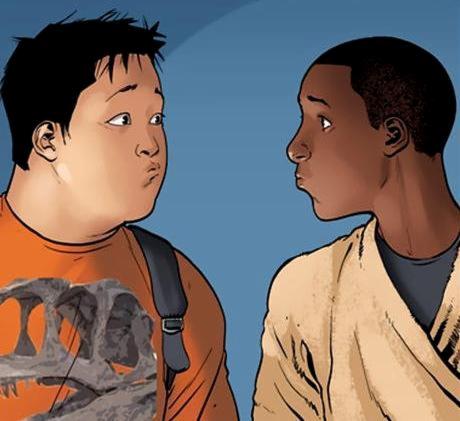 READ: Check out this awesome MS. MARVEL fan-film, KAMALA, and our thoughts on it!

Ned in HOMECOMING clearly draws a lot of inspiration from Bendis’ Ganke in the SPIDER-MAN (MILES MORALES) comics. A majority of Ned’s characteristics can be attributed to Ganke. Ganke, a notable aspect of the comics, basically had his name changed to Ned to help with the film’s diversity. While Ganke is important to Miles Morales character, there needs to be a better distinction between Ned and him.

Furthermore, this iteration of Peter is a teenager just like Miles; in earlier films Peter was an adult. In HOMECOMING, to become a full-fledged Avenger in Stark’s eyes, Peter has to grow-up. Across multiple comic series, the idea of Peter being treated like an Avenger-in-training is a foreign concept. The Avengers-in-training concept is attributed to Miles’ generations of heroes, not Peter’s.

Let’s take a stroll down conspiracy theory lane for a moment and discuss young Aunt May. Marisa Tomei’s casting as Aunt May in CAPTAIN AMERICA: CIVIL WAR left more questions than answers. What’s the point of a younger version of Aunt May? Why cast someone as talented as Tomei to play such a one-dimensional character? Is it possible that Marvel has plans for Aunt May other than a love interest for Tony Stark? I think so.

READ: Get ready for SPIDER-MAN: HOMECOMING with its Top 5 exciting things!

This storyline could be an indirect nod to the comics. In the Spider-Man mythos, Peter Parker’s parents worked as government agents before they died. If the MCU gives Aunt May that storyline, it would explain why she’s younger than her comics counterpart. It can also be another comparison for HOMECOMING’s Peter Parker and SPIDER-MAN (Miles Morales). Miles’ father is a former S.H.I.E.L.D. agent. This twist in HOMECOMING is unlikely, but it would be a great surprise and alternative back story.

Just because Miles Morales is a Spider-Man doesn’t mean he is an interchangeable knock-off. It does not help Marvel to casually swap aspects of Miles’ life with Peter Parker’s. Peter is one of the greatest superheroes of all time. However, it is important to differentiate between the two Spider-Men so as not hurt the development of Miles.

WATCH: Pre-game for the film by watching our DRUNK COMIC BOOK ORIGINS for Spidey!

Being both Spider-Men, yes, Peter Parker and Miles Morales share a commonality. That said, the person behind the suit makes the superhero unique. Marvel needs to refrain from casually swapping their stories, especially since Miles was created in 2011.

Marvel may blur the lines with Peter and Miles to create a fresher Spider-Man film franchise, but we’ll have to wait until HOMECOMING premieres to see if they’re truly different.