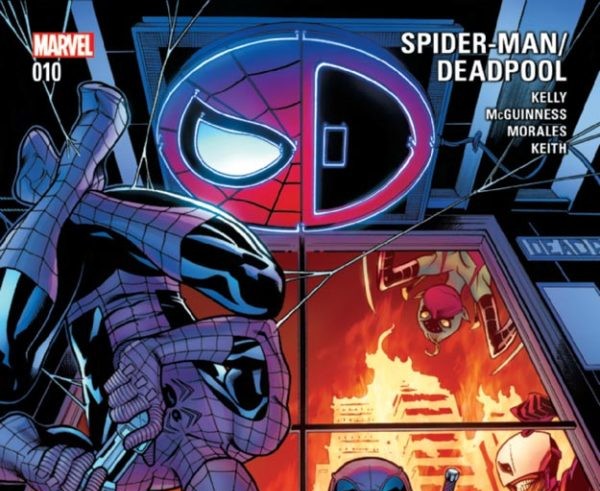 I think my favorite thing in superhero comics is watching the heroes just hang out and be themselves. What do they do when they aren’t busy saving the day? I think this issue finally confirmed that that approach is what I love so much about SPIDER-MAN/DEADPOOL. The action in it might fall a little flat, but as always, Deadpool and Spidey’s bromance is the highlight.

READ: Catch up on last week’s issue with our review!

The issue opens with Deadpool and Spider-Man hanging out in Deadpool’s clubhouse. It’s a secret man cave Deadpool created to hide all his favorite things from his wife, Shiklah. They try to make sense of where Itsy-Bitsy came from in between rounds of junk food and video games. I love watching these two just hanging out. It’s a great space for Joe Kelly to let them bounce off of each other. Obviously, I still love their mid-fight scene quips, but it’s great to know that this dynamic exists on and off the battlefield.

This bro paradise was not meant to last. Who should storm the gates of the man cave but Patient Zero and Itsy-Bitsy. Spider-Man and Deadpool spend a few moments to mock Patient Zero’s ugly face before springing into action. Watching these two banter and build off of each other’s jokes is great. Friendship goals right there.

It’s not long before Itsy-Bitsy starts whooping both Spider-Man and Deadpool like it was nothing. She puts them in dire straights almost immediately. Seeing the duo struggle like this was something new. Their dialogue sounds desperate, but that doesn’t make it any less hilarious. 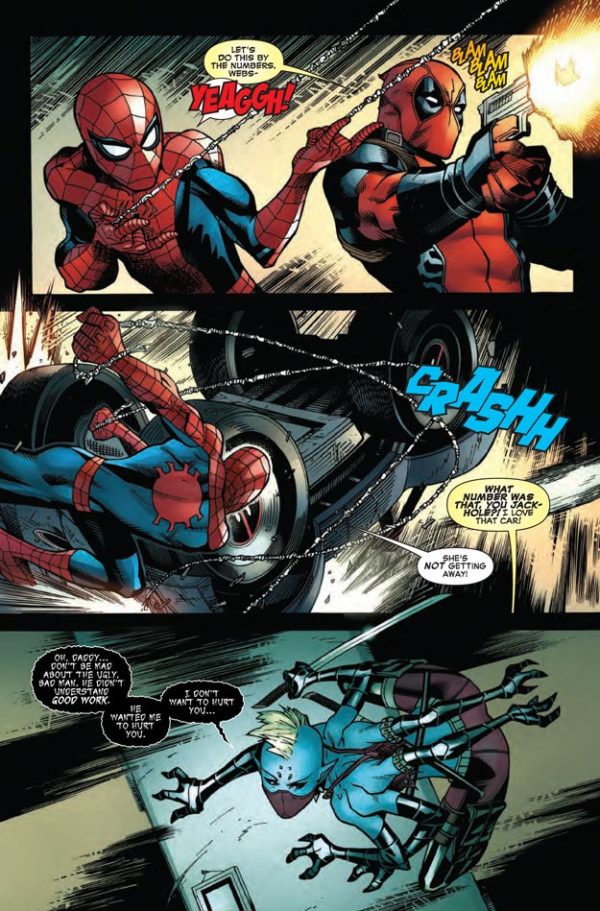 I think artistically this issue excelled in terms of layout. The paneling was fractured and tangled like a spiderweb, and characters appear out of the panel on the black edges of the page. It adds an eerie sense of being trapped, which matches Spider-Man and Deadpool’s situation. I also loved watching Itsy-Bitsy in action. The way she moves around is creepy. Watching her lay a beat down on both of them at the same time is impressive. She’s a great villain, and I hope to see more of her. 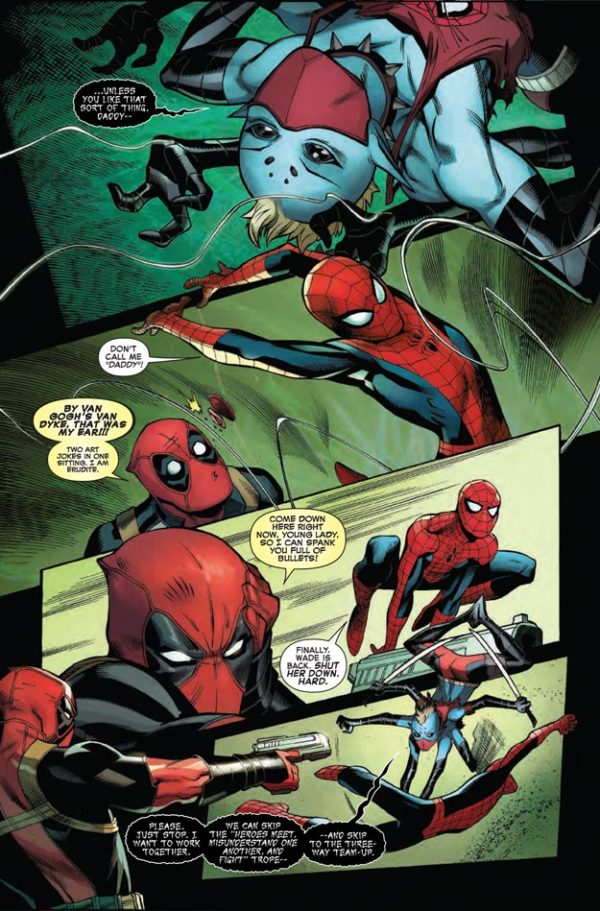 That said, the plot resolution fell flat. When Spider-Man and Deadpool get pinned down by Itsy-Bitsy’s attack, they decide to blow up Deadpool’s clubhouse to make a break for it. It felt like Joe Kelly wrote himself into a corner and rushed the ending. I wanted to see Spider-Man and Deadpool try and escape or outwit Itsy-Bitsy. This felt like a cop-out, but I’m willing to partially forgive it because Itsy-Bitsy escapes, and I hope to see more of her.

The characterization was still on point for this issue. As always, it had me laughing out loud. I just wish the plot would step up in the way the characterization has in recent issues. I’ve come to realize that this series doesn’t need a complex plot. This isn’t a title that readers look to for high-brow academics; they just want to see two quippy dudes bro out. But come on, step it up.