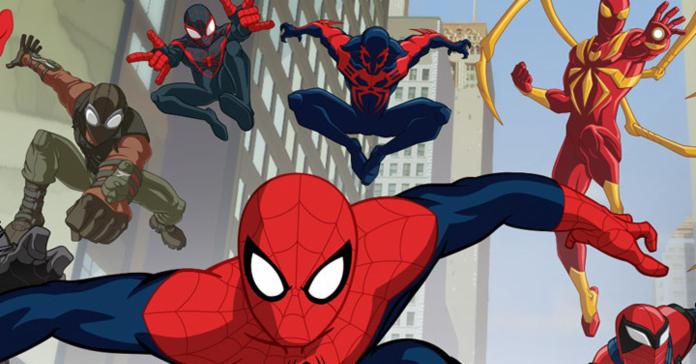 With everyone’s favorite webslinger swinging back into theaters this July, ComicsVerse is taking a look back at SPIDER-MAN’s greatest adventures. From the big screen to the small screen to a simple comic panel, we will find out how this ol’ Web Head has evolved since he first webbed his way into our imagination.

As we all know Spider-Man’s not only Marvel’s most iconic superhero, but he’s one of the greatest of all time. With his third feature film franchise, SPIDER-MAN: HOMECOMING, kicking off in July it’s no wonder why he is so popular.

Spider-Man is everywhere; he’s in several comic spinoffs, video games, films, and popular animated series. Spider-Man has been doing this for 50 years. He has been on screen and in animation, for 50 years. Spider-Man animated web-slinging adventures have survived decades across multiple generations, and his animated shows are still going strong.

The Importance Of The First Spider-Man Animated Series

Similar to THE BATMAN/SUPERMAN HOUR in 1968, SPIDER-MAN in 1967 wasn’t any different from that generation’s animated series. They were similar in animation techniques, safe plot structure, and cultural relevancy.

The plot structure of SPIDER-MAN (1967) consisted of the following tropes. A criminal attacks New York City with a dastardly plot. The Daily Bugle gets the scoop, and they make Peter Parker photograph the situation for the paper. Peter Parker as Spider-Man discovers the criminal’s identity, usually a villain from the comics, and foils their plot defeating them.

Even though the first Spider-Man animated series was not perfect, it was important for it to be successful on TV. The animation for the show was under budget and incredibly weak. The spider on Spider-Man’s costume had six legs when it was supposed to have eight. Most of the action sequences of the third season were reused from Season 2’s episode, “Rocket Robin Hood.”

The show played it safe regarding using more comedy than the dramatic character arcs that made Spider-Man unique. Although the series was not transcendent for animation, it was faithful to the comics and spirit of Spider-Man. The catchy opening jingle aside, this series played it safe for preservation’s sake. The implications of the SPIDER-MAN (1967) series was its success and popularity. Without it who knows if the Spider-Man would have received another chance in television or film.

Spider-Man In The 80s

Now the spinoff SPIDER-MAN AND HIS AMAZING FRIENDS did something different. It exposed Spider-Man fans to the Marvel Universe with characters like Iceman, Human Torch, and Firestar. This is one of the first series that regularly included Marvel characters outside of the Spider-Man canon.

The 1980s generation of Spider-Man animation exposed fans who were just fans of Spider-Man to the Marvel Universe. Before, it was unusual to feature a lot of Marvel characters in a Spider-Man animated series. SPIDER-MAN AND HIS AMAZING FRIENDS is the show dedicated to that concept.

In fact, this show is directly responsible for NBC’s THE INCREDIBLE HULK animated series in 1982. Spider-Man’s animated series in the 1980s opened the door for a lot of other Marvel characters get television shows down the road.  More specifically, Spider-Man featuring so many X-Men characters helped inspire Fox Kid’s X-MEN in 1992.

Many of those guest appearances were good for Marvel in the way it exposed their audience to other Marvel characters. That didn’t work well with the overall plot of the show. The shows of the 1980s did not have any continuity with the plot, but those shows still worked well for Spider-Man.

The Golden Era of Comic Animation

MARVEL COMICS SPIDER-MAN aired on FOX Kids from 1994 to 1998 with 5 season and 65 episodes. The animation in this series was fantastic for its time, and it still holds up fairly well to today’s standards. In this series, Spider-Man has a storyline that lasts throughout the series. Throughout all of the seasons, Spider-Man’s conflict with Kingpin always pops up. He can defeat Kingpin in one episode, but he is never able to put him behind bars for good. It is small arcs like that which provides the show its continuity.

Previous show’s before the 1994 SPIDER-MAN lacked essential continuity that carries over from one episode to the next. Before this show premiered, Spider-Man animated shows were not episodic. This series broke that trend and provided a storyline for every season. This allowed Peter Park, and his alter ego Spider-Man, to grow respectively during the duration of the series.

This is an example of how successful episodic animated shows can be if they stick with an interesting storyline. THE SPECTACULAR SPIDER-MAN in 2008 was also critically acclaimed for being the best written episodic animated series, period. This cult classic, like the 1994 series, did not use comic book tropes to win the heart of its fans. As a result, the 2008 animated series was so good TV Guide named it one the sixty greatest animated series of all time.

Spider-Man is a beacon of contemporary culture in mainstream animation. ULTIMATE SPIDER-MAN (2012) creates a universe that combines the MCU, the Ultimate Spider-Man Universe, and the Marvel Universe. The series opens Nick Fury and the S.H.I.E.L.D. recruiting him to be a part of a new superhero team. This makes Spider-Man apart of a larger universe with other Marvel characters.

Throughout the series, he teams up with Ironman, Hawkeye, Phil Coulson, The Hulk, and Thor. This is meaningful because it gives Spider-Man new character plots with other characters. Crossovers events in animation were rare from the 1960s to 2000s. Unlike the previous Spider-Man animated series licensing rights sometimes prevented massive superhero team-ups in animation. Now that Disney owns the rights to a ton Marvel characters it has leeway to be creative with animation.

The new-found creativity from ULTIMATE SPIDER-MAN created room for diversity to exist in mainstream animation. In the seven animated series proceeding ULTIMATE SPIDER-MAN, people of color are virtually absent. There were no supporting characters or recurring superheroes that were a person of color in any of the Spider-Man series. Women, like Gwen Stacy, Mary Jane, and Felicia Hardy were either Peter Parker’s love interest or a noir-like villain.

READ: Do You Want A Closer Look At The Recent SPIDER-MAN: HOMECOMING Trailer?

The introduction of Miles Morales and Gwen Stacey took an inclusive step in creating diverse characters in the Spider-verse. Gwen Stacey went from a former romantic interest to a hero in her own right like her fellow Spider-Men. Miles Morales also became a Spider-Man and one of the first persons of color to be a vital part of the Spider-verse. After four seasons and 104 episodes, it is the most successful Spider-Man animated series to date and the most progressive in 50 years.

The Future of Spider-Man Animated Series

Later this year another Spider-Man animated series will premiere. MARVEL’S SPIDER-MAN will be the latest versions of our favorite web slinger on television. Everything from the sneak peak of the series looks great so far, and the animation is fantastic.

It also sounds like this version is directly inspired by Tom Holland’s Spider-Man in SPIDER-MAN: HOMECOMING which debuts July 7. The 9th Spider-Man animated series based off of the new upcoming film looks like it’s going to be another success.