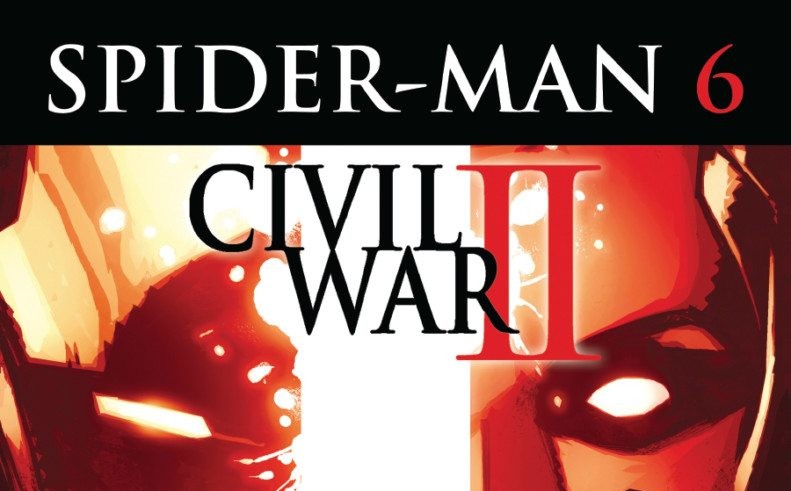 It’s that time of year again: events dominate the comic stands and all our favorite titles get tied into them. This time around it’s CIVIL WAR II with SPIDER-MAN #6 as a tie-in issue. The problem I have found with these events is how they can high-jack other series and break up a story arc you’ve been following. It can be frustrating, especially if you have to wait months before the series gets back to the story you’ve been reading about. Fortunately, SPIDER-MAN #6 balances the tie-in and its ongoing story quite well.

READ: Catch up with the series with our review of SPIDER-MAN #5!

In #5, the issue ended with Jessica Jones, hired by Miles’ grandmother, taking pictures of him and listening in on his conversation. This continues in #6 with Jessica eavesdropping on Miles and Fabio (mutant Goldballs) as they discuss their superhero identities. It’s not long before she makes a hasty retreat. Meanwhile, Miles’ parents discuss the ramifications of what hiring a private investigator could mean and make a decision. We then get a pretty amusing scene where Ganke curses the friend-zone so Miles tries to offer him advice on his romantic life. 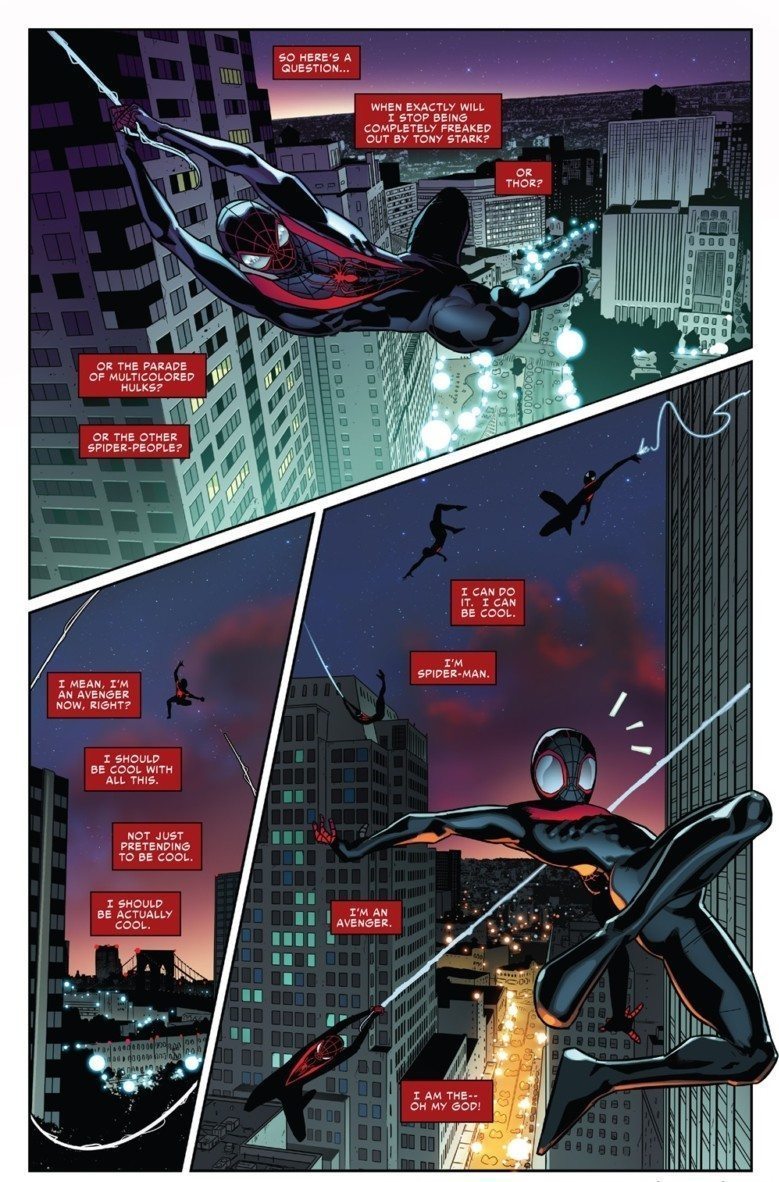 It’s at this point that Tony Stark gets involved, asking Miles where he stands. Miles has no idea what he means, so Tony lays it all out, that there is an Inhuman who can see the future and some of the heroes, particularly Captain Marvel, want to use him to stop events from happening before they happen. Tony thinks it’s a bad idea, raising his concerns with Miles. This scene plays out well, giving weight to Tony’s concerns while also showing us a flash of that typical Tony arrogance. It’s also clear that while Miles may agree with Tony, he’s not prepared to fight against people who disagree with him. This makes it a tad refreshing, that while Miles seeks the approval of his peers, he doesn’t necessarily want to fall in line to get it. The discussion between them is an honest and frank one, and Miles is left to consider what to do next.

What’s nice about this is how we get enough of the ongoing story to keep us interested, yet when it introduces the tie-in element, it keeps us intrigued. While Tony and Miles’ discussion is a reflection of what is going on in the CIVIL WAR II event, it never feels confusing. Their discussion of profiling and taking action on somebody before they have even done anything continues the themes contained within the SPIDER-MAN series about race, accountability, responsibility, and honesty. Maybe it’s because Bendis is writing CIVIL WAR II, the IRON MAN comics, and SPIDER-MAN, but he can weave these threads together without it feeling forced. 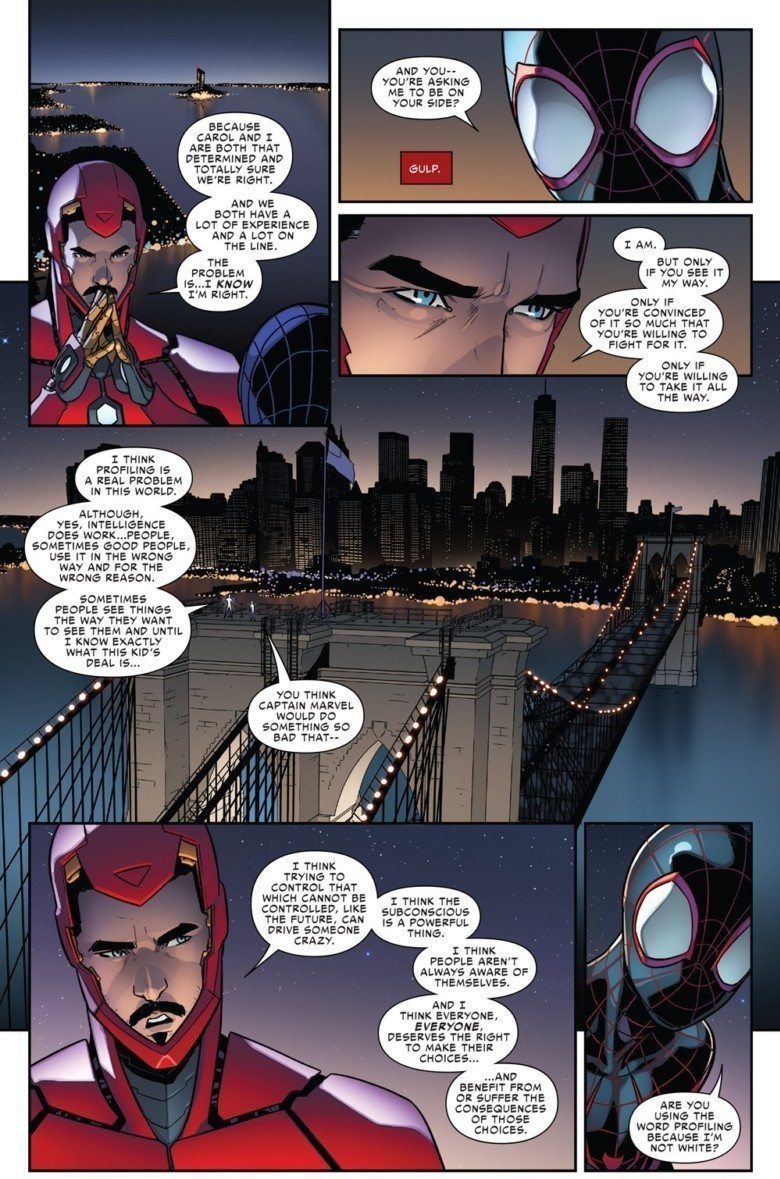 For this issue, we have Nico Leon and Marte Gracia on art and colors respectively. To be honest, there was not very much stylistic difference between this team and the series regulars Sara Pichelli and Justin Ponsor. Leon’s inks are slightly thinner while Gracia’ coloring felt cleaner and slightly muted. It only disrupts the reading experience in some panels where Miles makes a face that seems a bit off, or when Tony, in his Iron-Man costume, is drawn in an aggressive stance which is out of tune with the dialogue in the panel.

As issues go, it had moments of humor and honesty, and the plot is still going strong. But it does feel a bit slight at times: some of the dialogue is a bit repetitive and it’s the weakest of the series so far. However, even at its weakest, it’s still a fine comic book. SPIDER-MAN #7 continues the CIVIL WAR II tie-in trend, but if the whole event plays out like this issue, I won’t mind that much.