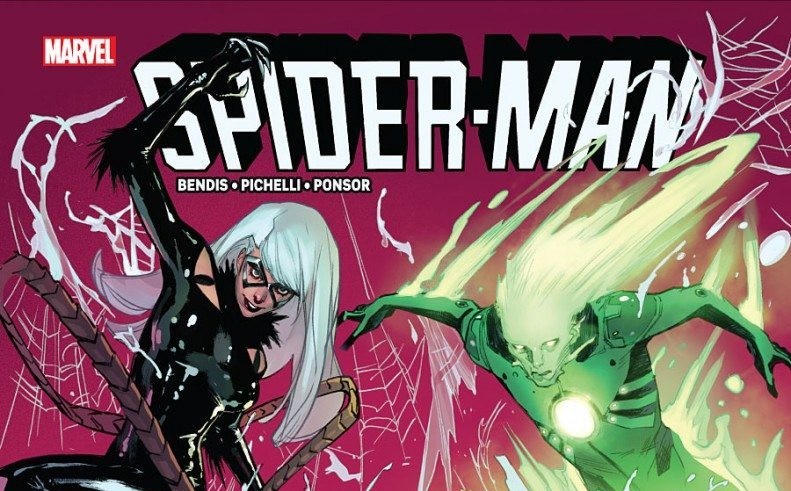 My biggest problem with SPIDER-MAN is that it ends. Let me clarify. I pick up an issue, I start reading and the next thing I know, I am involved in Miles’ world. I care about his problems, I love his friendship with Ganke, and I enjoy seeing him as plain old Miles just as much as seeing him decked out as Spider-Man. Each issue flows easily and pulls me in. I laugh, I cry (on occasion), and I grin at how much this comic is full of pure joy. It feels like comics at its purest. It’s most fun. So when an issue ends, I feel like the ride is over but I don’t want to get off. I want and need to know what happens next. And I’ve a whole month until I get the next issue and the the cycle begins again.

READ: Missed out on what went down in SPIDER-MAN #3? Check out our review here!

But what is is about SPIDER-MAN that makes me feel this way? How is this issue any better than the last one? How can a series, only four issues in, be so good? 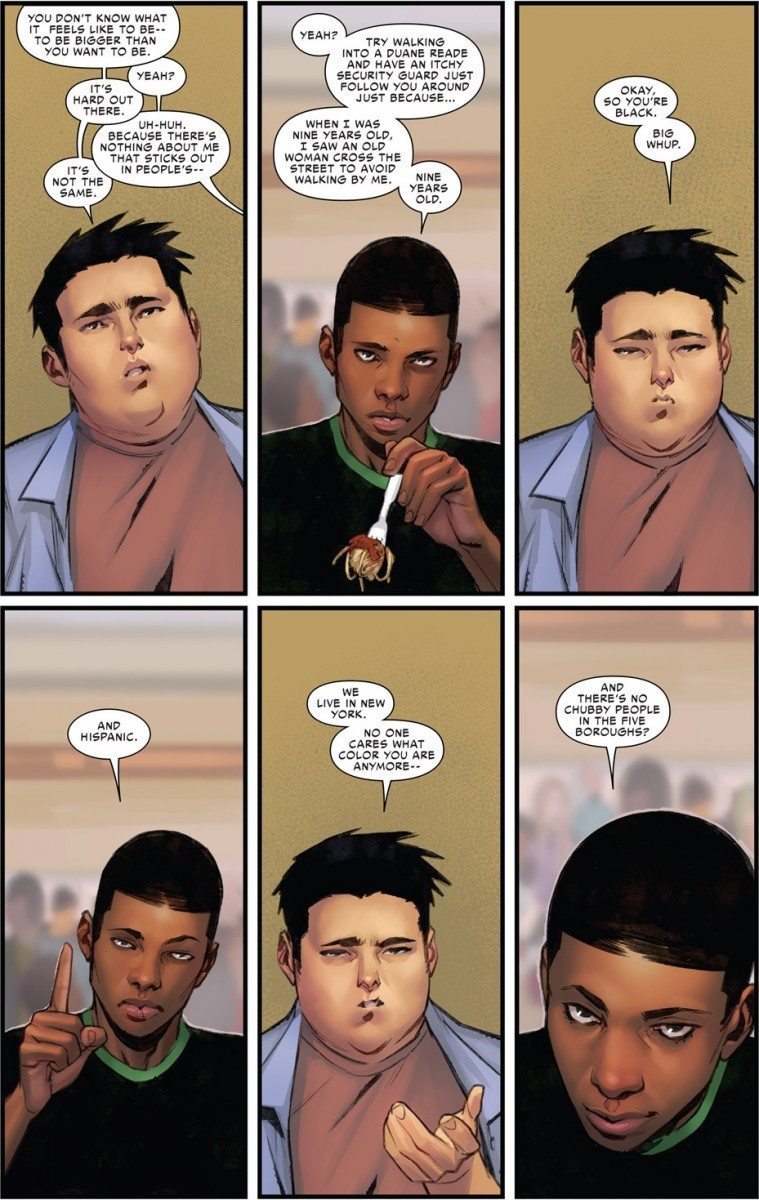 Answer: Having a creative team that gets and understands what’s so special about Miles Morales. Brian Michael Bendis writes Miles, Ganke and the rest of the cast with honesty and care. Miles has struggles; he wants to be a hero, but he doesn’t want to flunk school. He feels real and relatable. Bendis’ dialogue, especially in this issue, has a flow to it that rings true. Ganke and Miles have a conversation about race and body image that is awkward and human without being preachy. It’s two friends talking about what’s important to them. But that’s not all. Ganke makes a big mistake in revealing Miles’ secret identity to the newest member of Brooklyn Visions Academy, Goldballs (formerly of the X-Men). It’s excruciating to read, yet also laugh out loud funny. You understand Gankes’ motivation for making this error, yet you can see why Miles would be shocked at his friend’s cavalier attitude of his secret identity.

READ: Miles is also a member of the ALL-NEW ALL-DIFFERENT AVENGERS. In #9, they encounter the all-new Wasp. Find out more with our in depth analysis of the issue!

But that’s not all. Miles dons his costume to go web swinging and clear his head, but it’s not long before he is neck deep in danger. At any other time, these would be easy to defeat, but Miles’ mind is preoccupied with questioning Ganke’s motivations. All of this reminds me off the early days of the original Spider-Man, by Stan Lee and Steve Ditko, with Peter balancing his super heroics with his civilian life, which brings me a lot of joy. 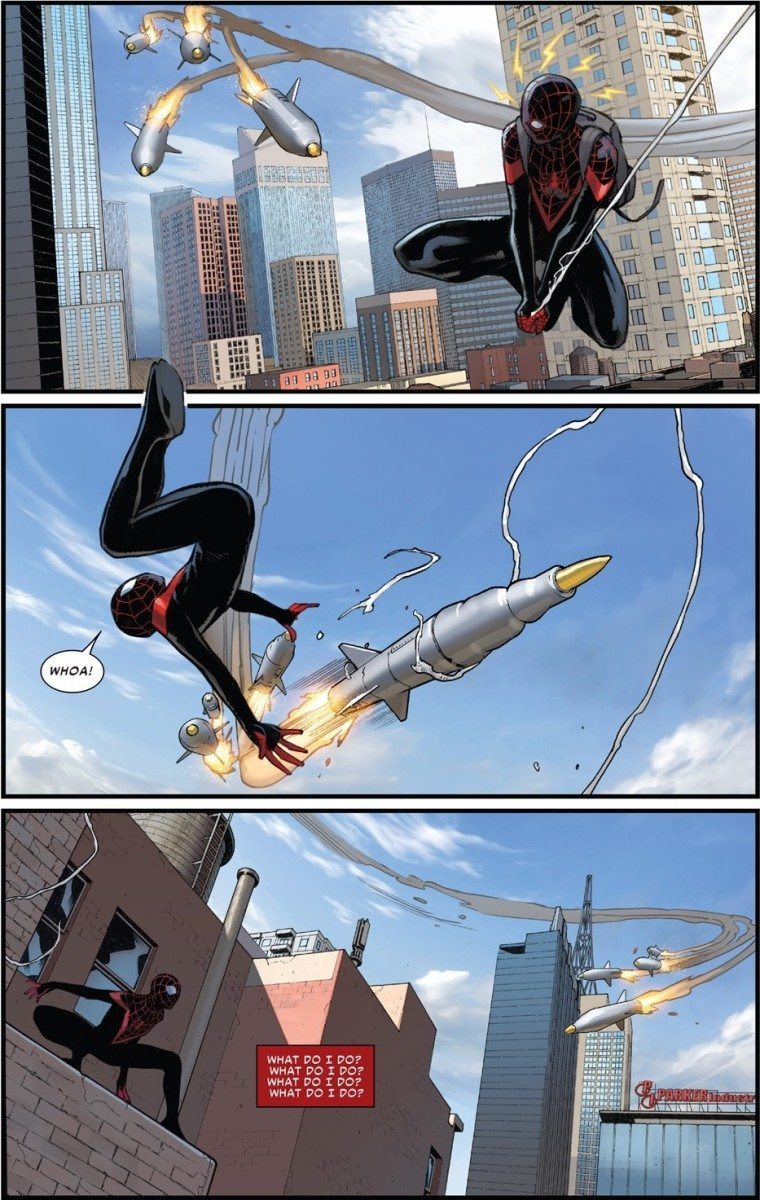 But for every Stan Lee, you also need a Steve Ditko; in this case, Sara Pichelli. For a script that is 50% based in a school canteen, it’s never visually boring. The panelling and gestures are spot on. The human interactions are superb. She draws very subtle yet reactionary eyes, which really sells the drama and humour of the book’s conversations. The action scene where Spider-Man swings through New York trying to avoid missiles is full of energy and danger. Spider-Man is always in a state of dynamic movement. Even in moments of stillness, he is always ready for action. To compliment the art department further, Justin Ponsor adds color which is subtle, yet it feels like you’re watching an animation. There are a lot of faded backgrounds and simple coloring to focus attention on the characters’ actions. It complements the artwork so well that you wonder if one would suffer without the other.

READ: The original Web Head teams up with Tony Stark in our review of AMAZING SPIDER-MAN #12!

A special shout out should also go to VC’s Cory Petit. Any letterer who can control Bendis’ rat-ta-tat dialogue, giving each sentence its own paced beat without compromising the artwork, should be celebrated. Again, this just shows what the right people can do when put on a book. They all make it soar and swing. SPIDER-MAN continues to be one Marvel’s best. Make sure to jump on board and enjoy a modern Marvel masterpiece in the making.