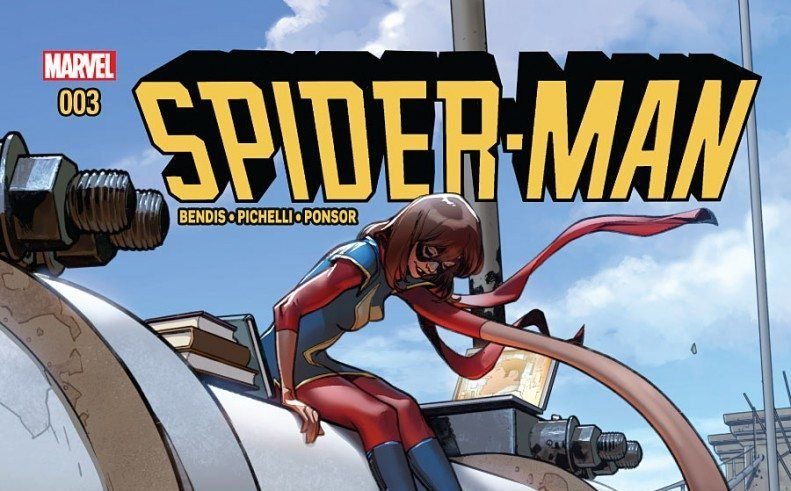 I was late to the Miles Morales bandwagon. However, when I finally found the time to read his story, I immediately loved it. Reading about Miles Morales felt like discovering my love of Spider-Man all over again. Of all the things All New All Different Marvel was producing, my eager eyes were the most desperate for more Miles. After reading issue #1 of his new series, this was down on my pull list. He took on a demon who took down the Avengers…twice! With Spider-Man #3 it goes slightly left of field. Miles does not don the suit once throughout the issue. He does not battle any nefarious villains (though the villains do show up). Instead, it centers on an argument between himself and his grandmother. And it’s probably the best issue yet. 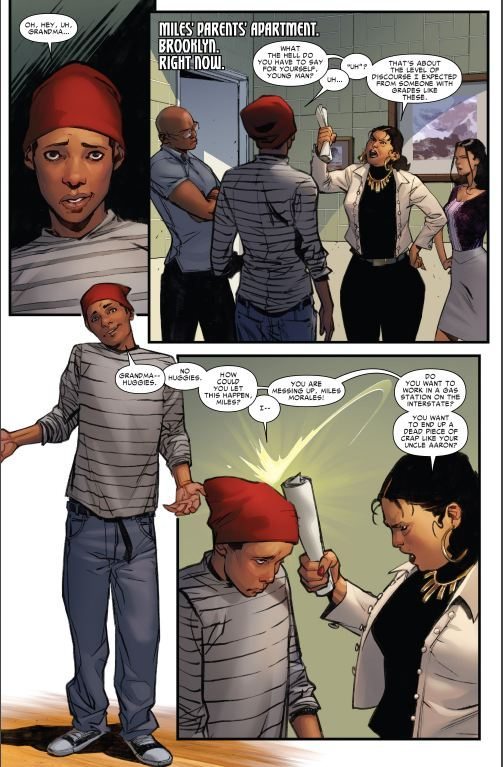 READ: Late to the series? Catch up with our review of SPIDER-MAN #1!

After arriving home from his latest adventure with the Avengers, Miles is greeted by his grandma demanding to know why his grades are slipping. Brought in by Miles’s mom to beat some sense into him, his phone is confiscated, and he is grounded until his grades improve. Then Ms. Marvel shows up eager to go on patrol and tries to entice Miles away from his volcanic family. In most situations, the hero would just throw caution to the wind and join her but that doesn’t happen here.

READ Check out what the original Spider-Man is doing in our review of AMAZING-SPIDERMAN #9!

Brian Michael Bendis is at the height of his dialogic powers here as a battle of words and opinions are thrown across Miles’s home. The dialogue sizzles, full of cutting commentary while also coming from a place of (misjudged) concern. It’s also full of wonderful comedy, both textual and visual. There were moments where I had to stifle a few laughs and felt thoroughly entertained. With such a dialogue driven issue, I also have to give major kudos to Virtual Calligraphy letterer Cory Petit on finding the different emotion beats in the script and placing them brilliantly throughout the art. 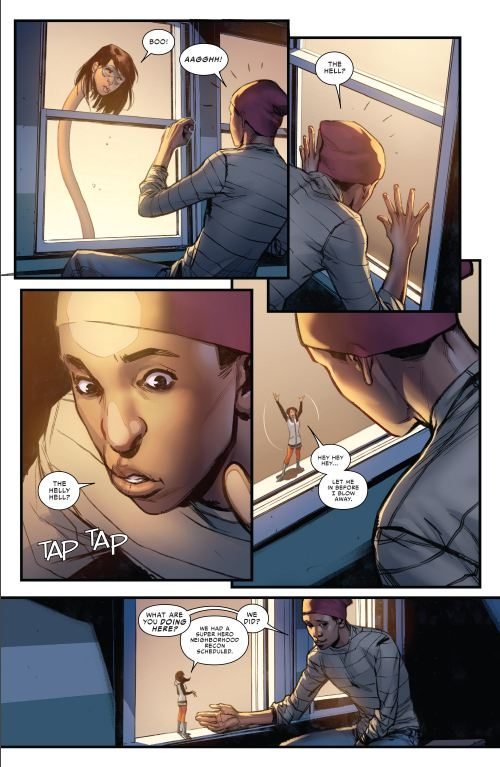 Sara Pichelli makes the mundaneness of everyday life interesting and vibrant. For a comic that takes place pretty much in an apartment, it never feels boring. Her characters are full of energy and her gestures create great moments of frustration and comedy (sometimes at the same time). Her panel beats on a Ms. Marvel gag where she extends her neck are perfect. Justin Ponsor’s colors also add volumes to Pichelli’s beautiful work and help create a cramped atmosphere as Miles realizes he isn’t getting out of this easily.

READ: Miles is also a member of the ALL NEW ALL DIFFERENT AVENGERS! Check out our review of #6 here!

This is my favorite Spider book at the moment and if Bendis and crew can create a stellar issue without one moment of Spidey action, their storytelling power guarantees I’ll come back again and again. It’s the most entertaining comic I’ve read this month.