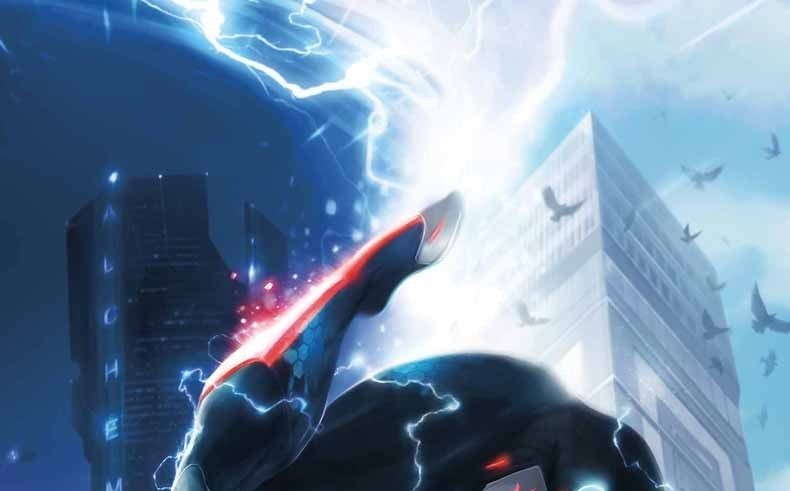 SPIDER-MAN 2099 #1 picks up where where the last volume ended, giving us a tranche de vi of a Spider-Man successfully (for once) giving up the webs for an awesome life.

SPIDER-MAN 2099 #1 by Peter David, Will Sliney and Frank D’Armata

Yet again, we have my favorite Spider-Man written by my favorite Author. The All-New All-Different Marvel promises new starts for all our favorite heroes.

We last saw Miguel O’Hara (Spider-Man 2099) in AMAZING SPIDER-MAN #1 when he confessed to Peter Parker his feelings of uselessness; there are just so many Spider-Men, he doesn’t see why he’s needed. To that end, he’s resolved to devote his time to repairing his timeline, which is still a wasteland following the events of “Secret War”.

Miguel (Spider-Man 2099) O’Hara’s had a pretty rough time of it, but now that he’s given up the webs, he’s taken to enjoying himself. He’s got Tempest – who was just his building’s superintendent until he saved her life – and he’s got the smarts from being a scientist from nearly 100 years in the future. And spider-powers… so there’s that.

READ: Check out another of this week’s must-reads – THE TWILIGHT CHILDREN #1! 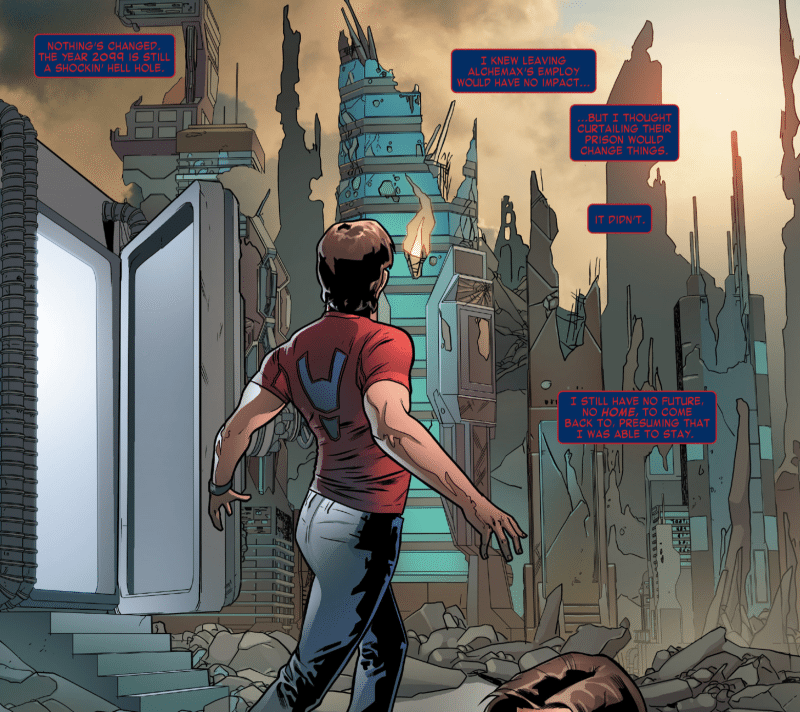 Miguel continues to check in on his former home in the future, frustrated that his successful prevention of the building of Alchemax’s prison appear to have made no difference, and the clever appearances of other characters from that ruined future indicate others may be of the same mind. This promises to slowly introduce more characters into the mainstream Spider-Man 2099 mythos straight from the events of Marvel’s recent “Secret Wars” event. 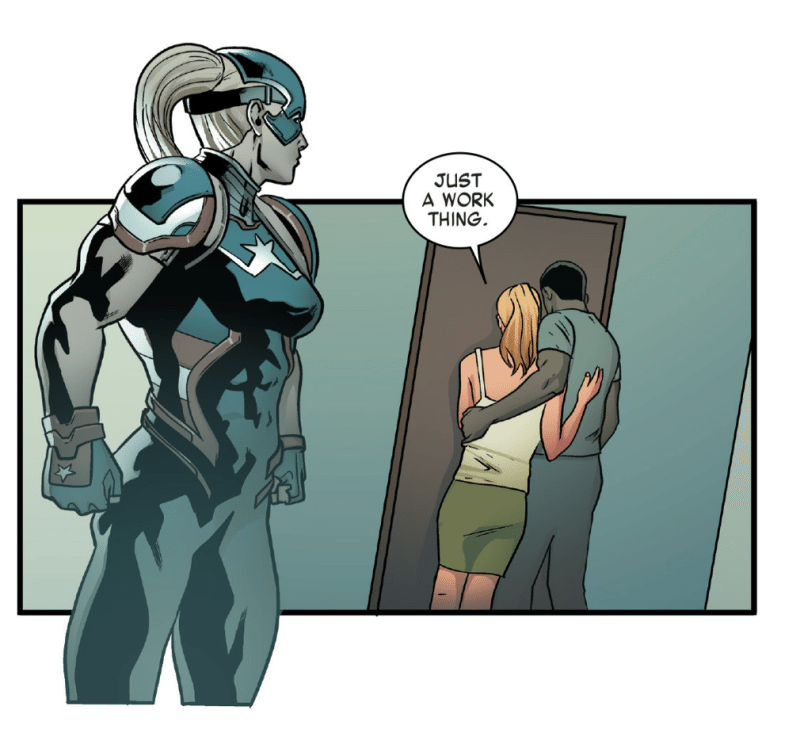 David has come back to writing the character he originated in the 90’s to offer up a former hero who is now his own worst enemy. Let’s call it what it is: Miguel appears to be battling depression. He can’t help but feel he’s not good enough, but as a reader, I clearly see that it’s all in his head; it’s something I can identify with.

It’s impossible to say for sure whether Miguel is actually suffering from clinical depression, but this is a good interpretation of its reality. When we reach a “low,” be it from our brain-chemistry, or external events, it spreads like ink in a glass of water; soon we begin to doubt everything, and, like Miguel, we begin to wonder if we’re good enough for anything.

The themes of depression, love, and insecurity explored in this issue hit like a brick. If, like me, you have such a short list of favorite characters, identifying with one of them in such a personal way captivates more than just your logical mind.  As the book comes to a close, a quiet dinner-date takes a powerful turn – a turn which will change Miguel O’Hara forever.

Will Sliney’s pencils and Frank D’Armata’s colors are perfectly-suited for Peter David’s legendary dialogue and complex characters. The interpersonal relationships practically glow on the page, fully illustrating the warmth of a smile or the chill of self-doubt; the subtle shifts in D’Armata’s color palette are concisely indicative of the thematic elements set to appear in this volume, and the energetically choreographed action sequences combine for a memorable start to the All-New All-Different iteration of this fan-favorite book, including its cast. In short, David, Sliney, and D’Armata have created magic: It’s far more than another Spider-Man spin-off. 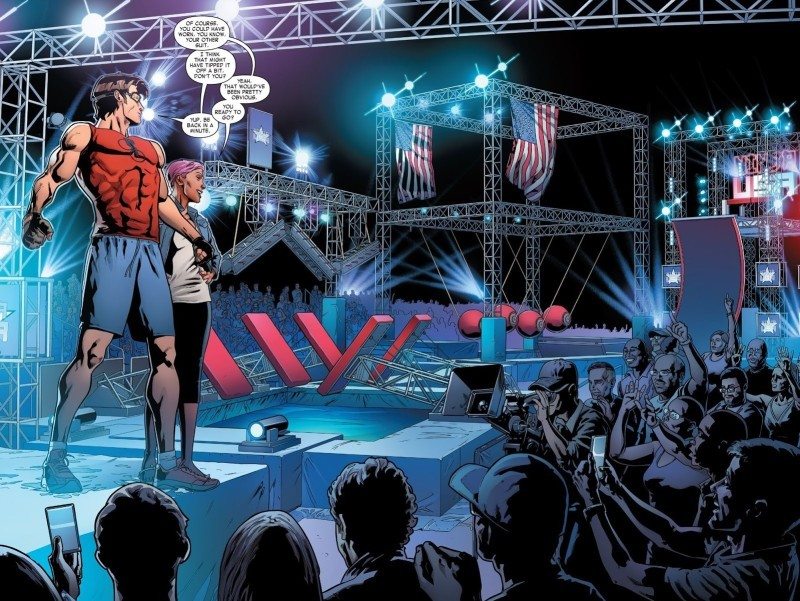 There are a couple of issues from a technical perspective. If you run through the images in this review, you’ll see that the book uses a deep red on deep blue for text-boxes. It looked to me like it was just a mistake in the printing – they’ve used a similar approach plenty of times, but there appears to be a mistake in the contrast of the red.

SIDE NOTE: Miguel’s new suit has yet to be seen, but Peter did offer to upgrade his threads, but the recently “retired” hero turned him down. Miguel suggested he “give it to Miles [Morales]),” which is an understandable reaction from a guy who feels like he’s not needed. However, after the events of this issue, we’ll no doubt we seeing it very, very soon.