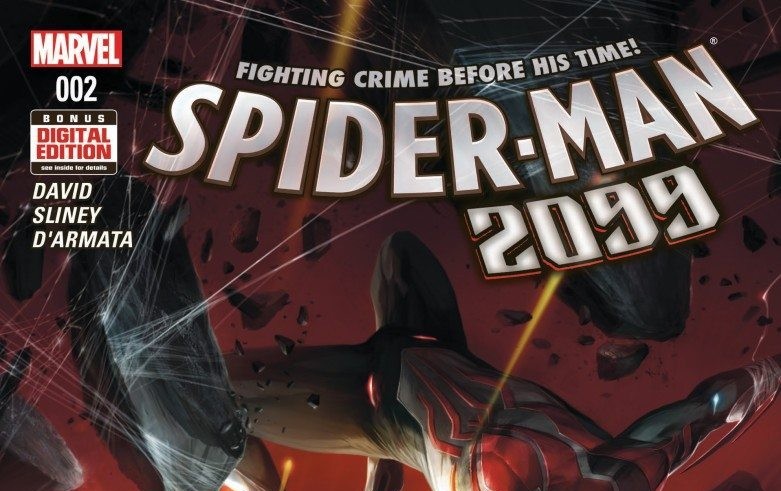 The second issue of “SPIDER-MAN 2099” continues to plant seeds for the book’s future while giving us a Spider-Man who, following the events of last issue, sets off on an obsessive crusade for revenge. Unlike his friend Peter Parker, Miguel O’Hara is ready to slit throats first, and ask questions… well, never.

When the first issue of the new SPIDER-MAN 2099 series was released last month, it culminated in a tragedy which — given the character’s history — seemed to indicate a very dangerous future. Not dangerous for Miguel O’Hara —dangerous to whomever finds themselves the focus of this Spider-Man’s rage. The second issue fulfilled those predictions and burned with an empathetic energy liable to set fans’ hearts racing. 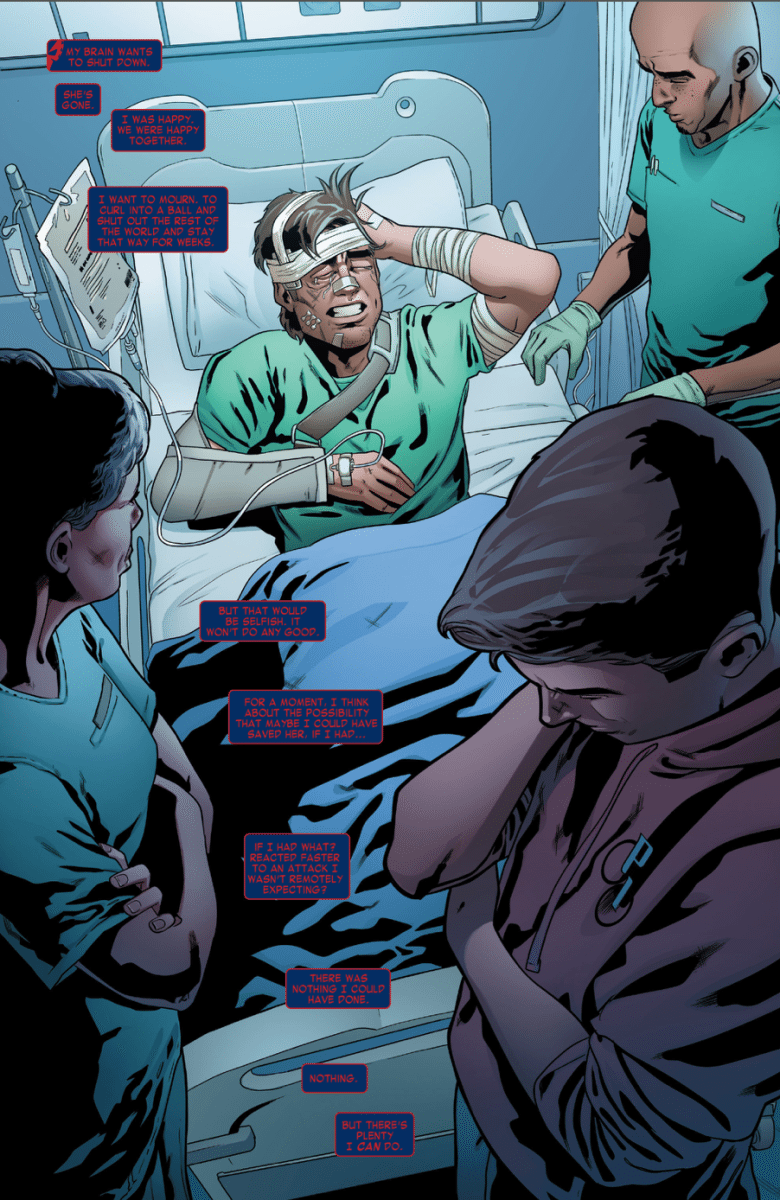 We opened with Miguel severely injured after the last issue with Peter Parker standing over his hospital bed waiting for him to wake up, and the first thing he asked for was Tempest. Peter is in the middle of saying something when a mysterious woman barged into the room claiming to be Tempest’s mother. She clearly harbors disdain for Miguel citing his interference in the “plans” she had for her daughter, and informing Miguel Tempest is dead.

This moment erased every bit of rational thought for our hero, and despite the insistence of Peter, his co-workers, and even his holographic assistant, Lyla (“lyrate life-form approximation holographic assistant”), he’s not going to waste any time on less-important things like, ya know, healing.  As is typically the case in comics, when a hero sets out with nothing but distilled rage to fuel his actions, it brings nothing but more trouble.

This installment reminds me again how difficult it is to quantify David’s skill as a writer. His characters drive the plot, rather than the plot driving the characters. It’s the decisions we see our hero making that lead us from page to page; something frequently observed in David’s work. The utilization of this approach thus far in SPIDER-MAN 2099 has already begun to blur the lines between Miguel O’Hara’s emotions and those of the reader, which builds our investment in the future of this title.

A more subtle (but no less effective) example of this is the use of cut-away scenes which show how the hero’s actions in the past are affecting things on a wider scope, specifically concerning Mac Gargan and Tiberius Stone’s plans to renew their efforts to build a super-max prison, and Captain America 2099’s amnesia. 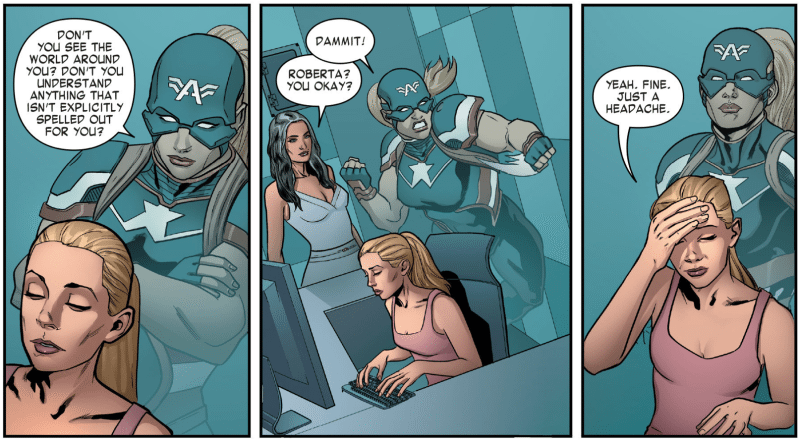 Will Sliney’s art contains brilliant character moments which serve to make readers sad that issue three is still a month away. It’s like watching a movie. He works very naturally both with the complexities of David’s brilliant writing as well as with the unique physicalities which have disambiguated Spider-Man 2099 from the Amazing Spider-Man for nearly 25 years.

READ: There’s some serious “ish” goin’ down in Marvel this week, so you’d better check out Danny’s review of SAM WILSON: CAPTAIN AMERICA #2

Now for the art you really want to address – The All-New All-Different Spider-Man 2099 Costume!

This is the first time Spider-Man 2099’s basic design has changed since his introduction in 1992. If I were Sliney, I’d be scared stiff to be the first person to illustrate this new costume sequentially; the previous look could possibly be considered on-par with the “Back In Black” suit on a list of easiest-to-draw Spider-Duds, but this one is a straight-up beast! Look for yourself and take in all those details: 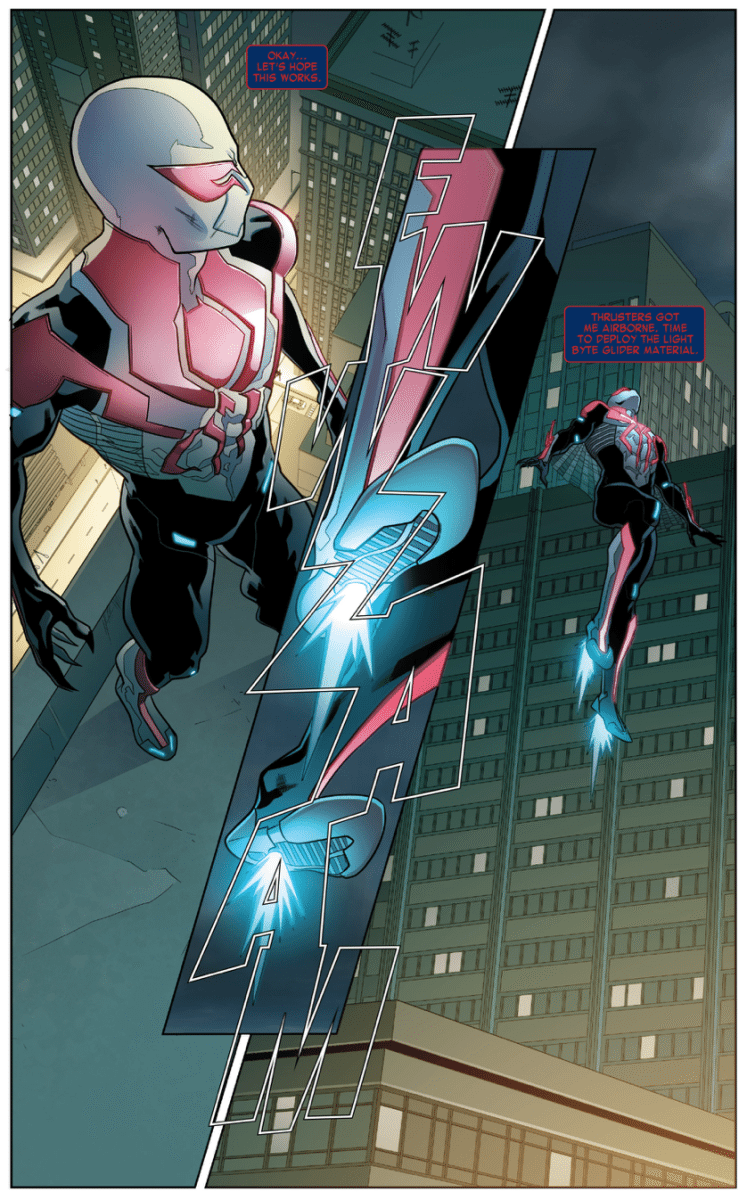 Oh, and Spider-Man 2099 now has boot thrusters. Did I forget to mention that? HE CAN FREAKING FLY!!! How awesome is this page!? LOOK AT HOW AWESOME THIS PAGE IS! Dear Will Sliney, please never leave this book. Kay, thanks, bye.

In summation, SPIDER-MAN 2099 hits all the right buttons in it’s second month, and shows us what a re-launch book should be.

Seriously. Buy it. Now. Why aren’t you out the door, yet? Okay, fine – maybe one more image to get you up and moving: 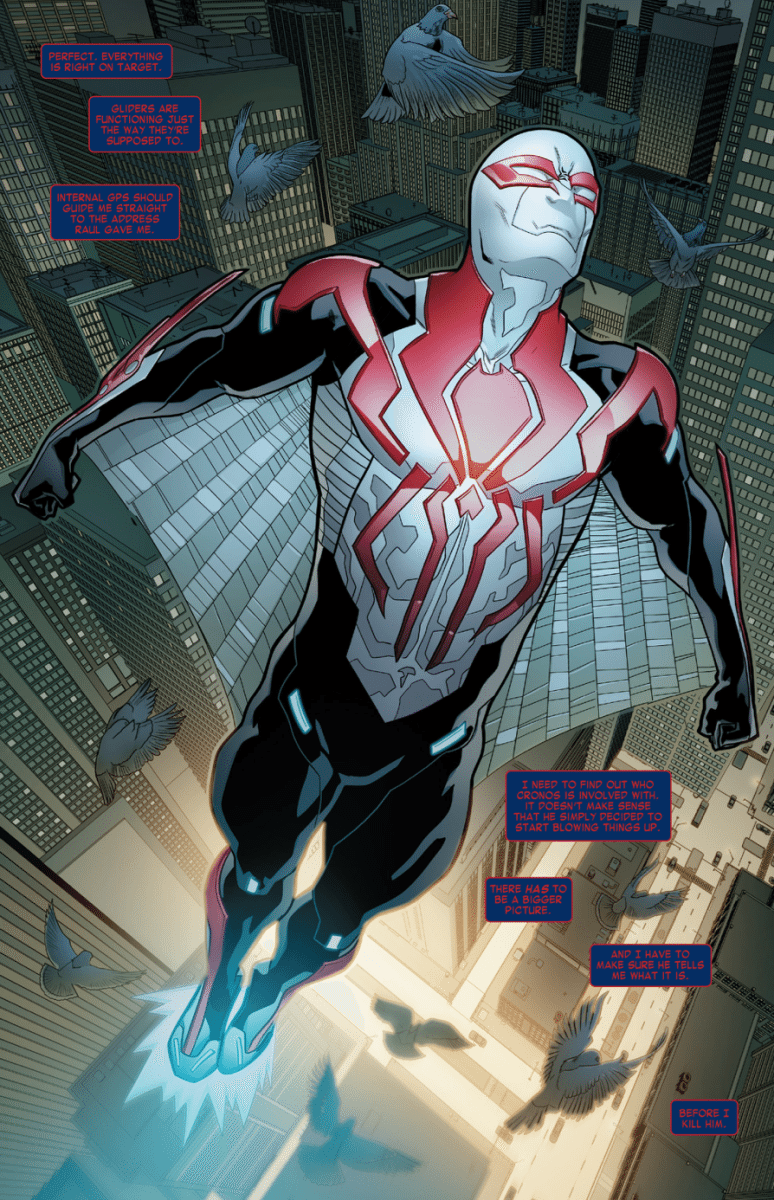