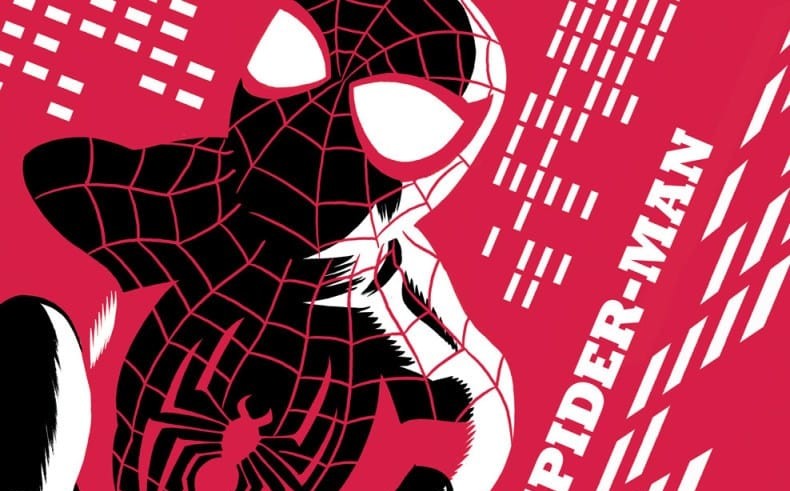 In the wake of SECRET WARS finally finishing, Miles Morales’ latest adventure begins in the pages of SPIDER-MAN #1.

In the hands of the creative team that brought him into existence, Brian Michael Bendis and Sara Pichelli, Miles is no longer living in the Ultimate universe. He is now a permanent resident of the former 616, Earth Prime. Does the excitement carry over after ULTIMATE SPIDER-MAN was cancelled almost eight months ago? Let’s find out! 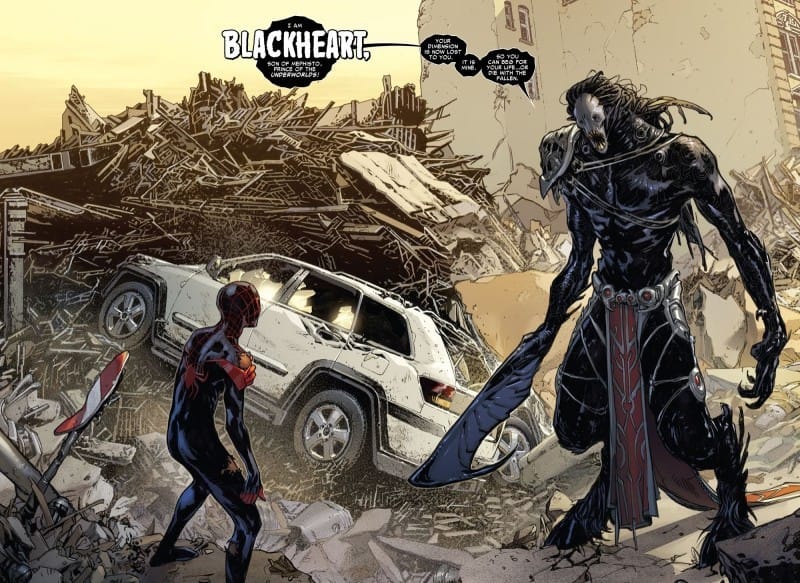 Bendis is at it again in this series. By that, I mean we have another All-New, All-Different Marvel hit on our hands. With Pichelli returning to the character she co-created five years ago, the series definitely starts out with an energy very similar to the character’s debut. SPIDER-MAN #1 has its low points, like many of the ANAD first issues, but there’s no concern that these bumps will negatively affect the series in the future. This is Miles Morales debut as a mainstay on Earth Prime, and it is one hell of a time.

READ: Missed out on the finale of SECRET WARS? Check out our review of the final issue!

The issue begins in media res as we see Miles confronting Blackheart, the son of Mephisto, in New York City. He seems to be the only Avenger left standing amidst the wreckage as the villain towers over the young Spider-Man. And that is all we get before we see Miles getting rejected by a girl for missing a hot date that he apparently “begged for.” After an attempted pep talk by Ganke, we are reintroduced to the world of Miles Morales as a citizen of Earth Prime. We see that he’s grown in the months since SECRET WARS. Plus, his mother is alive again, and his relationship with his father seems healthy and functional again. With his grades slipping due to his responsibilities as Spider-Man, Miles makes a decision to cut class when his spider sense picks up explosions throughout the city. The story then returns to where we left off with Blackheart, and the issue ends with a must-see confrontation. 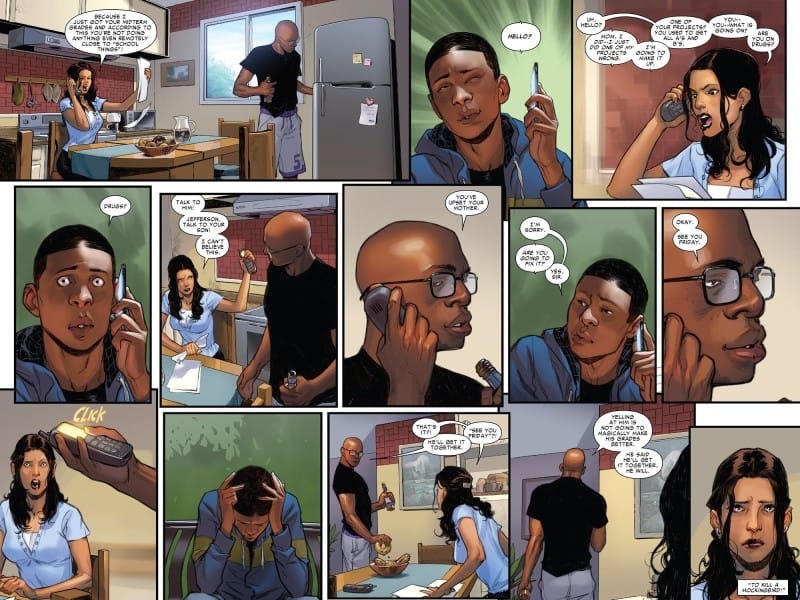 Bendis has written Miles for the last five years at Marvel, and he seems to have no desire to stop. Frankly, I’m really happy about that because the character is written so well. I mentioned earlier the low points of this issue, and none of them stem from Bendis’s story or Pichelli’s artwork. SECRET WARS’ delays led many ANAD Marvel issues to begin without context, often contributing to confusion and frustration for readers. While the first issue of SPIDER-MAN was released after SECRET WARS #9, there are a lot of questions left looming in this issue about Miles’ relationship with his family and the 616 characters. The return of his mother was explained rather oddly in the final issue of SECRET WARS, but what happened to the character’s previous stories? Does he not remember the Ultimate Universe? As fun and gorgeous as this issue was to read, I came out with a lot more questions than I did answers.

One of the highlights of this issue for me, in particular, was Pichelli’s artwork. I had sorely missed her drawing the character and hope she stays on the series for more than a single arc. Her touch of illustrating Miles’ daydreams of himself or his memories of battles was just too much fun. Drawing a character like Blackheart into this issue is not something that readers were used to in the Ultimate Universe, so I am a bit excited to see how Miles will be dealing with more magic and monsters.

READ: Curious who else survived SECRET WARS? You can find out here!

All in all, this is definitely a book to pick up for prior fans of the character as well as new readers. While I might complain about there being more questions than answers, this is just the thing for a new reader looking to get into the character. I’ll be adding this to my pull list in the upcoming months, and you should, too.