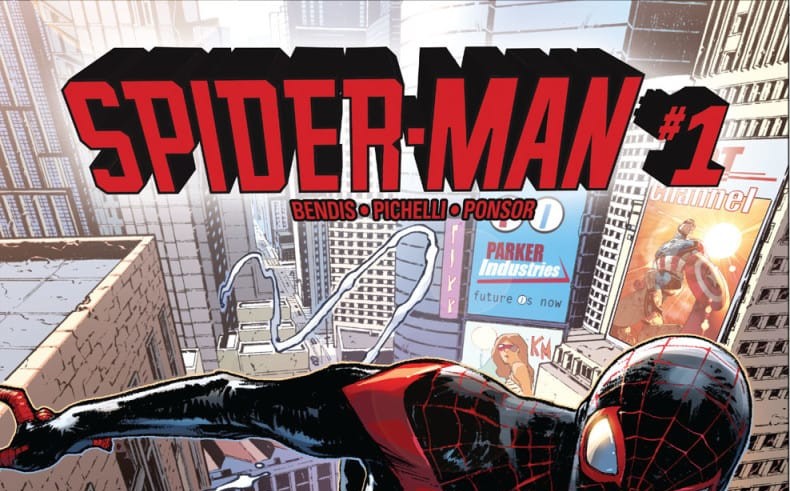 Miles Morales has some big shoes to fill. With Peter Parker focused on running Parker Industries, the streets are ripe with thieves, vandals, and the occasional career criminal, and it’s up to Miles Morales to help protect the city as NYC’s new Spider-man alongside fellow Avengers Iron Man, Captain America, and Thor! All his big shot friends, however, won’t make being a teenager/high school student/superhero any easier, as we will see in Marvel’s all-new SPIDER-MAN #1!

It’s no surprise Marvel and Spider-man’s creative team have decided to highlight Miles Morales as the new Spider-man and give him his own title, placing him in the big leagues. The recent flux of Spider-man titles featuring minority driven protagonists – Gwen Stacey as Spider-Gwen and Cindy Moon as Silk being examples of this – has received widespread acclaim from critics and fans alike. Miles himself received a strong following and fan support during his run as Ultimate Spider-man. His popularity and ability to infuse some long sought-after diversity into the Marvel Universe makes Miles the ideal character to don the mask.

READ: Want to know more about Spider-Gwen? Click here to read our thoughts on RADIOACTIVE SPIDER-GWEN #1!

Here’s what Marvel has to say:

Miles Morales Comes to the Marvel Universe in SPIDER-MAN #1!

New York, NY—January 11th, 2016 — Welcome to the Marvel Universe Miles Morales, hope you survive the experience! That’s right, he’s here – and the Marvel Universe will never be the same again. Today, Marvel proudly presents your look inside SPIDER-MAN #1 – the highly anticipated new series from blockbuster Miles Morales co-creators Brian Michael Bendis and Sara Pichelli! Sure, he’s been doing the super hero thing for a while now, but following the events of Secret Wars, Miles finds himself a full-fledged member of the Marvel U. Swinging next to Iron Man, Captain America and Thor as a member of the Avengers and patrolling the Big Apple’s rooftops as NYC’s own Spider-Man! But it’s not all fun and games. A lot has transpired in the eight months since Secret Wars and an entire new universe awaits him – friend and foe alike. Plus, his grades are in the toilet. The adventure begins this February in the can’t-miss SPIDER-MAN #1!

As Ultimate Spider-man, Miles faced his own unique mix of superhero anxieties that differed from those faced by Peter Parker. His experiences as Spider-man and as a black and Hispanic teenager growing up in Brooklyn, NY felt distinct and relatable in ways that differed from both 616 and Ultimate Peter Parker’s experiences. Very rarely do we find mainstream superheroes who defy the white narrative but aren’t defined purely by their minority identity. Rather, their ethnic and cultural background is but one – albeit important – factor which influences their experiences and perspective. Plus, as an added bonus, Miles takes the Spider-man title back to its infancy as a coming of age story by following a teenage superhero trying to juggle school, romance, puberty, and crippling anxiety all while saving the city/world/universe/everything in between. As the new Spider-man of the Marvel Universe, Miles injects some much need life and creativity into the Spider-man franchise, revitalizing the mantle while respecting its heritage. As a big fan of both Spider-man and Brian Michael Bendis, I have no doubt that SPIDER-MAN #1 will be spectacular. Miles Morales may have some big shoes to fill, but I am confident he will wear them well. SPIDER-MAN #1 begins February, 2016!