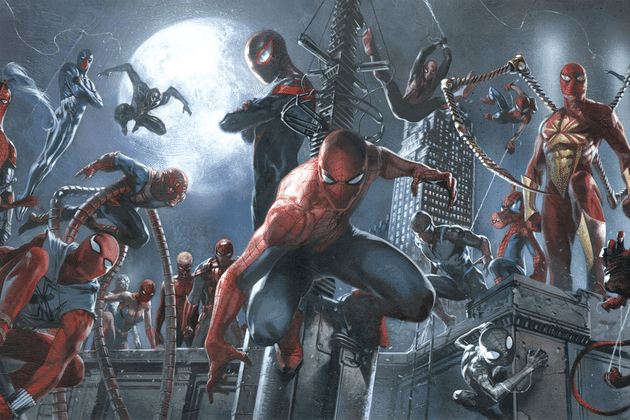 Amazing Spiderman #09 brings us to the long-talked-about Spiderverse storyline! And it is incredibly fun to see the way that a plethora of Spider-Men interact with each other. Even some of the Spider-Men I’m not too familiar with were truly amazing to see teamed up side-by-side with some of my favorites.

To keep those of us who haven’t read every issue of Spider-Man, they pop a caption next to each new character, explaining which Spider-Man they are and where they are from. There’s even a Spider-Pig!

How many different Spiders are there? Read on in our blogs!

These characters need to band together around the strongest of the Spider-Men, Peter Parker from Earth-616 (The Marvel Standard Universe). United, they need to stand against a group known as The Inheritors, who believe it is their destiny to control all of reality. Part of this is destroying the Spiders that travel along the webs of reality. There are a lot of cryptic references to The Other, and a lot of cosmic build-up. A lot of exposition in this first issue leads to some cool conflicts, but mostly the appearances of so many awesome versions of one of Marvel’s classic characters is the reason to buy this issue.

Hear more about the different Spiders from some of the creators in our interviews!

The plot is mostly pretty confusing up to this point. The Inheritors’ motivation isn’t quite clear, and their goals also seem nearly nonexistent. Apparently, they feed on the Spiders, so one would think that exterminating them would be an ultimately negative outcome for the Inheritors, but I assume in the subsequent 20-something issues they have planned, we’ll get a lot more development there.

For more on Spider-Man, check out our podcasts!

As far as the art goes, it’s pretty spectacular, especially because of having so many different characters, each with a different original artist and design. That has to be a challenge, getting each character to fit into one story, but this artist has no problem delivering.

Positives: It’s really cool to see all of these Spider-Men at once. The art is pretty great to look at.

Negatives: The story is convoluted so far, and has a lot of exposition to go through before we get truly underway.

Overall: An entertaining start to the story. 4/5

What do you think?  Is Spiderverse shaping up to be as epic as you were hoping?