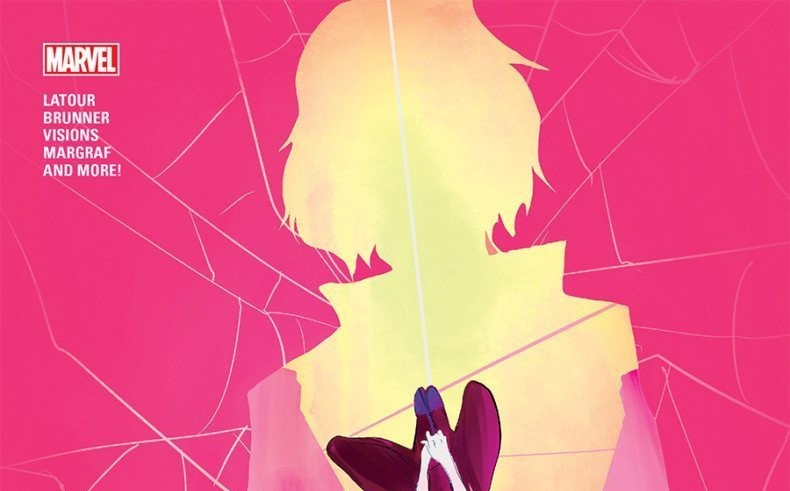 In the two years since her debut, Spider-Gwen has consistently been presented differently than a majority of Marvel’s characters. Writer Jason Latour has consistently imbued the character and the title that bears her name with an irreverent quality that plays with the conventions and norms of the Spider-Man franchise while at the same time grounding the character enough to remain relatable. It comes as no shock then that the very first SPIDER-GWEN ANNUAL plays with the very concept of an annual, while at the same time wringing feelings out of its readers in the best possible way.

READ: Catch up on the on-going SPIDER-GWEN series here!

As with most annuals, this issue is made up of several unrelated stories, all written by Latour. The first story, penciled by Chris Brunner, recasts one of the Spider-Man mythos’ most famous stories. Shortly after gaining her powers, our titular heroine hopes to gain fortune and fame by entering a charity wrestling exhibition against the Earth-65 version of She-Hulk. However, before she can head to the ring, Gwen notices a robber who’s fleeing through a crowd with the gate receipts—and who’s about to murder Ben Parker to make his escape. Following a one-page spoof story about a koala-themed villain, the book’s second story features art from Chris Visions and follows the Earth-65 version of Captain America on an emotional journey. She confronts this universe’s version of Steve Rogers, a comic book artist who told stories of Cap’s exploits that came to him in dreams. 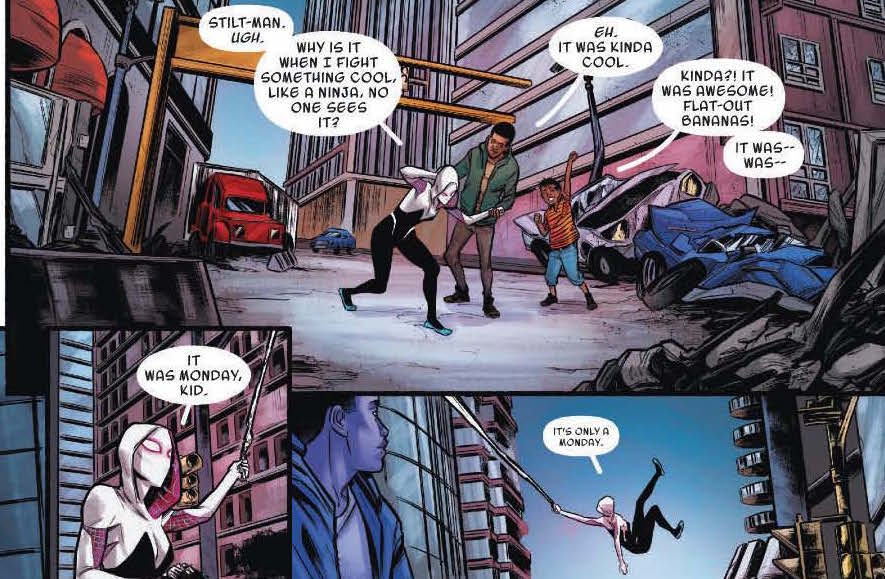 The book’s final two stories take a more comedic approach to the medium. The first revolves around The Watcher desperately attempting to uphold his pledge not to interfere in human affairs even though he’s absurdly bored watching Gwen and The Mary Janes do nothing but sit around and watch television. The final story follows a week in the life of Spider-Gwen, with each day represented as a single page with pencils from a different artist for each. The story is mostly comical in nature and features appearances from Spider-Ham, Silk, and Jessica Drew. 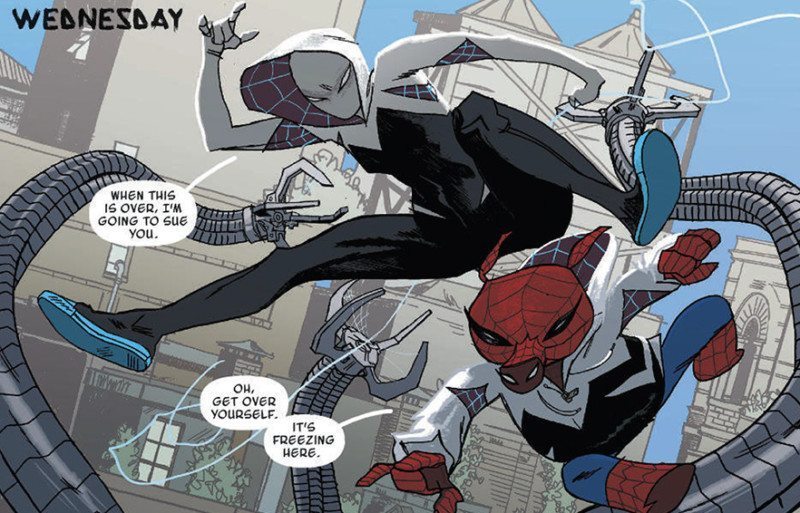 As with any anthology-style book, SPIDER-GWEN ANNUAL #1 is a tough book to review as a singular piece, as the stories really have no relation to each other. Therefore, a better approach is to look at each story individually. Of the four stories, my personal favorite is the first. Latour is able to adapt the story of Uncle Ben’s encounter with the robber in a new way, no easy task considering how many times that particular tale has been adapted in various forms of media. I won’t spoil the specifics of how he does it, but Latour is able to completely subvert any previous version of the story while at the same time having Gwen take the same lesson out of it that Peter Parker famously did. Artistically, this story is a bit of a mixed bag for me. I’m not a huge fan of Brunner’s character designs, but he does use some interesting panel layouts. Regular series colorist Rico Renzi handles those duties here which really elevates the story. I particularly enjoyed the palette he used on the double-page spread of Gwen’s daydream about tag-teaming with She-Hulk.

My second favorite story of the issue would have to be “Who Watches The Watcher.” The story is easily the most meta of the four, with numerous jokes playing on the traditional characteristics of The Watcher and the overall nature of the Marvel universe. I also particularly enjoyed the idea of The Watcher being bored out of his mind watching people living normal lives, considering that’s how a vast majority of human beings live. The art of Olivia Margraf and John Rauch is a bright, cartoonish style that fits with the humorous tone of the story. 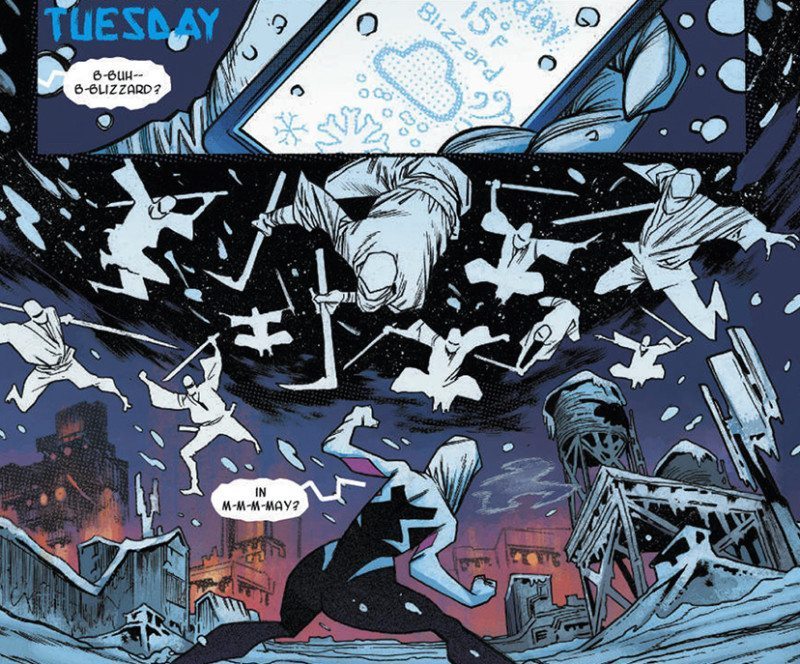 The “Eight Days a Week” story is solidly executed, but just feels like there’s something missing. Latour seems to want to tell a serious story where something is wrong with the climate, but at the same time loads the pages with visual gags which disrupt the flow of the story. The art only adds to that feeling, as the seven-artists-each-covering-a-day approach leads to a mish-mash look that hurts the story overall in my opinion. 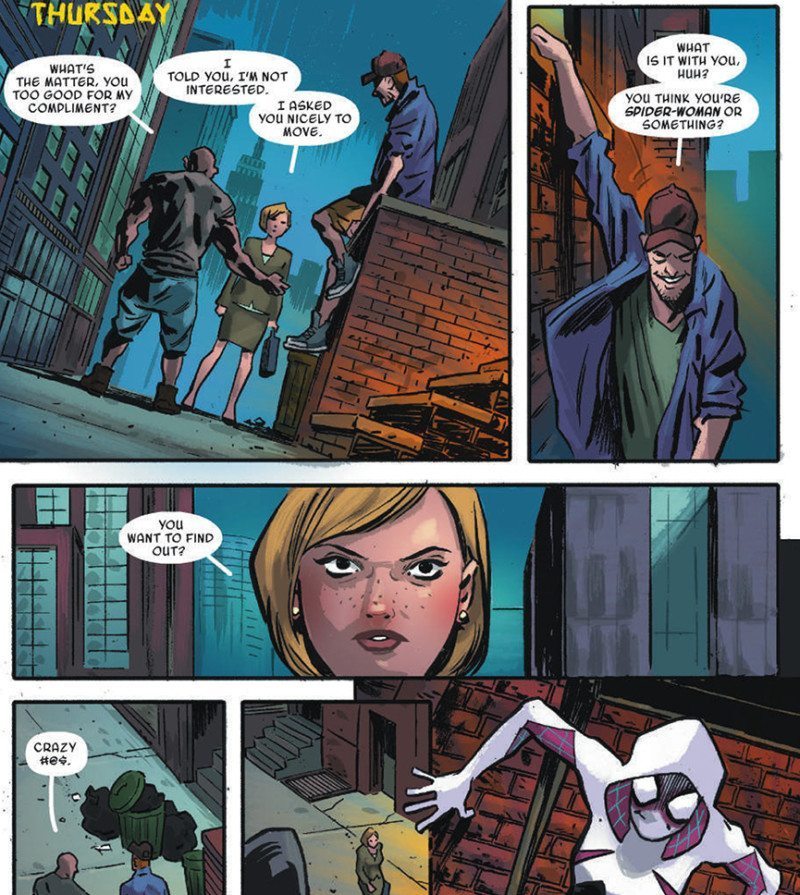 The weakest story of the issue is the unnamed Captain America story. Honestly, it’s not a bad story, but it just feels like it there could have been more to it. The concept of Earth-65’s version of Steve Rogers having been a comic book artist who wrote stories about Captain America is an intriguing one, but this story barely scratches the surface of that potential. The art doesn’t help, as the style employed by Chris Visions and colorist Jim Campbell doesn’t fit the story. I will say I did enjoy the Prince homage they put in the book-within-a-book section that displayed a page of Steve’s comic.

While not every story in the issue is a home run, SPIDER-GWEN ANNUAL #1 is definitely a fun read that fans of the series will enjoy. At its best, the annual is a perfect meld of the series’ hallmark character-work combined with meta humor about the very concept of comics. Latour reworks a classic Spider-Man tale to fit his universe, comments upon the inherent strangeness of the concept of The Watcher, recasts Steve Rogers as a comic book artist, and even finds room for Spider-Ham all in the same issue.