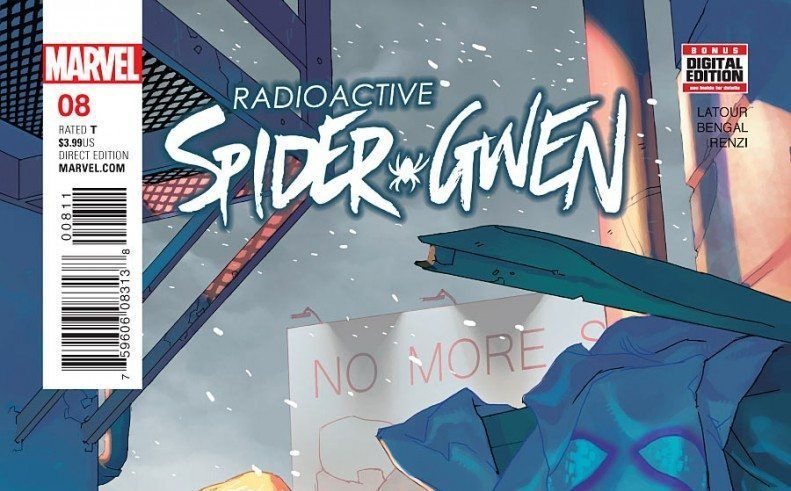 The eighth issue of SPIDER-GWEN serves as the fifth part of Marvel’s on-going “Spider-Women” crossover, which stars the titular character, Jessica Drew (aka Spider-Woman) and Cindy Moon (aka Silk). Since our last SPIDER-GWEN review, the plot of “Spider-Women” has changed considerably. The Earth 65 (Gwen’s Earth) version of Cindy Moon was revealed to be the villainous leader of S.I.L.K. who had made her way to Earth 616 to take over that Cindy’s life.

READ: Catch up on the last issue of SPIDER-GWEN here!

SPIDER-GWEN #8 begins with Gwen and Cindy visiting the latter’s workplace in order to find some clues as to what E65 Cindy is up to. They come across J. Jonah Jameson watching news footage of “Silk” in the midst of a crime wave and realize that E65 Cindy is destroying Silk’s reputation. They attempt to get information from 616 Cindy’s computer, only to find that her doppelgänger has already been there and left them an invitation to meet her at the Baxter Building. 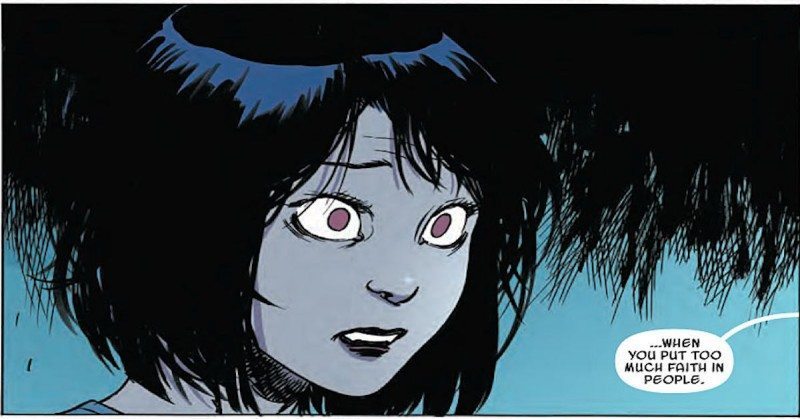 The two successfully enter the building and are attacked by E65 Cindy who’s armed herself with Earth 616 technology. After disabling Spider-Gwen and Silk, E65 Cindy explains the previously unknown way she was involved in Gwen getting her spider-powers (the specifics of which I won’t spoil here). E65 Cindy then uses tech to seemingly rob Gwen of her powers before leaving the two in a precarious position.

LISTEN: Check out our latest Podcast episode focused on INCOGNEGRO!

SPIDER-GWEN #8 unfortunately falls into the crossover trap that the previous issue was able to avoid. It’s somewhat understandable, as SPIDER-GWEN #7 was only the second part of “Spider-Women,” while this issue is the fifth. Even with that in mind though, it doesn’t make it okay that the issue’s setting will be almost incomprehensible to readers who are only reading SPIDER-GWEN. On top of that, the issue is really more about Cindy Moon than Gwen Stacy. Now, Silk is a character I generally enjoy a great deal, but it’s a bit weird to read an issue of SPIDER-GWEN essentially starring her. Writer Jason Latour is able to anchor the story with his usual dialogue flourishes, and the revelations about Gwen’s past are interesting, but, overall, the issue falls flat for anyone not caught up on “Spider-Women.” 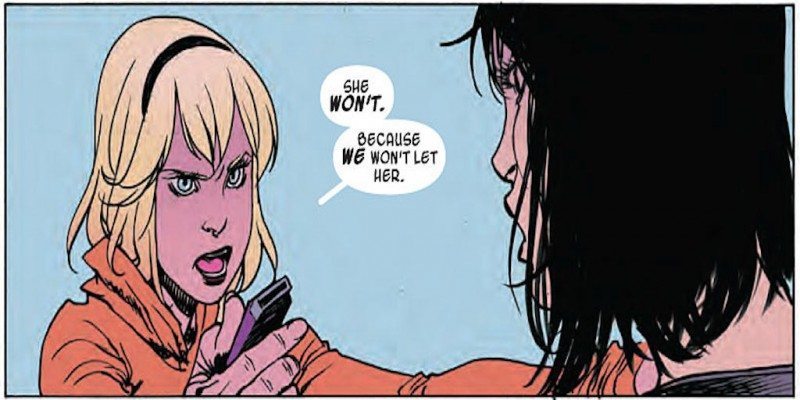 Artist Bengal and colorist Rico Renzi do a great job as usual. I particularly liked the differences between Earth 616 and the book’s usual setting. Renzi’s work is particularly good, as he uses a completely different color-palette that truly differentiates the book from the usual look of SPIDER-GWEN.

SPIDER-GWEN #8 gets a half recommendation from me. Those who are reading the “Spider-Women” crossover absolutely have to read it. However, readers who are only interested in the title character may want to skip the issue and simply seek out a synopsis of the reveals made about Gwen’s past.