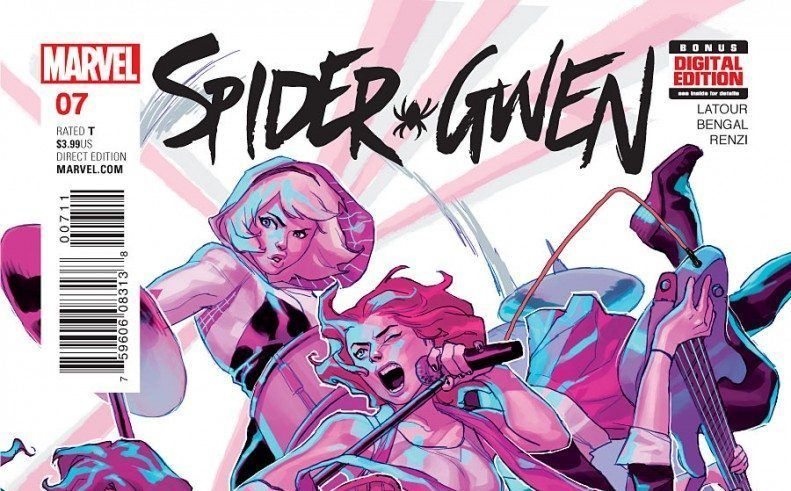 In the last several years, Marvel Comics has successfully diversified their Spider-Man line by creating breakout female heroes Spider-Gwen and Silk, as well as launching a solo title starring the original Spider-Woman, Jessica Drew. Due to this, it was perhaps only a matter of time until the company did a crossover with the three characters as they’re doing with the currently on-going “Spider-Women” event. The crossover began in SPIDER-WOMEN ALPHA #1, and continues in this week’s SPIDER-GWEN #7.

READ: Catch up on previous issues of SPIDER-GWEN here with our review of issue 6!

The issue begins where ALPHA left off, with Cindy Moon and Jessica Drew stranded in Spider-Gwen’s universe after Gwen’s “interdimensional bracelet” was stolen while the two were visiting. The trio sets out to learn who stole the bracelet, ending up in a local deli where they learn more about the differences between Gwen’s world and theirs. They even encounter her wannabe nemesis, the Bodega Bandit. Spider-Woman and Spider-Gwen are quickly able to subdue him; however, in the fracas, Silk takes off to find the SG-Earth’s version of her parents. 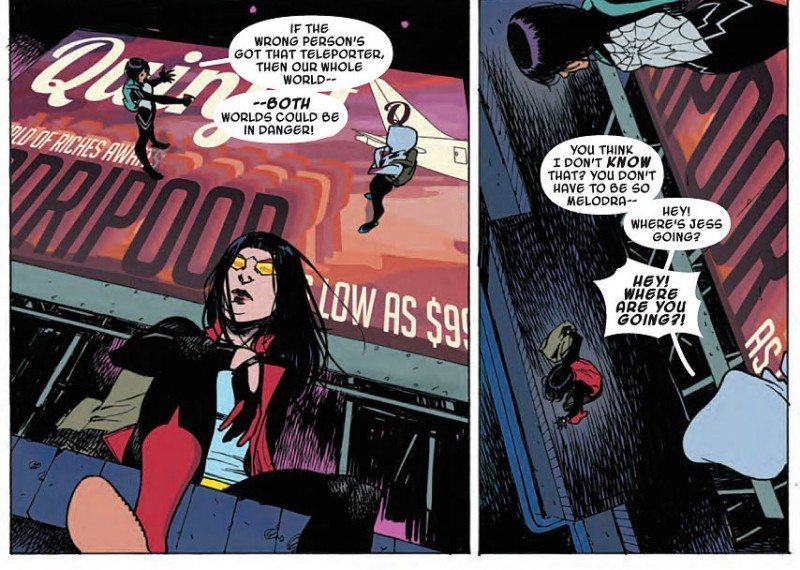 Having nowhere else to go, Gwen takes Jessica back to her apartment where the two walk in on a Mary Jane’s rehearsal. Seeing how desperate Gwen is to spend time with her friends, Drew tells her to stay behind while she heads off to find help. Jessica locates the SG-Earth’s version of Reed Richards, a young African-American boy, and enlists his help in getting back home. The two are attacked by a group of spies but are saved by Spider-Gwen, who disobeyed Spider-Woman and followed her. They take refuge at George Stacy’s house, where Jessica and George share a bonding moment over parenting advice. The serenity is short-lived, however, as an urgent call from Cindy ends the issue on a climactic note.

READ: Need more of the crossover? Check out our review of SPIDER-WOMEN: ALPHA here!

Crossover issues are always a tricky proposition for a writer, as they’re forced to balance telling a complete story for readers of their specific title, while at the same time delivering a chapter of a much larger story. I’m glad to say Jason Latour meets this challenge as well as can be expected in SPIDER-GWEN #7. A recap page at the beginning of the story quickly fills in readers on why Jessica Drew and Cindy Moon are stuck in Spider-Gwen’s universe, so Latour wastes no time on exposition and dives right into the story. The three-way interplay between Moon, Drew, and Stacy that makes up the first half of the book is highly entertaining, with the banter flying freely yet lovingly between them. I must once again commend Latour on finding new and interesting ways to differentiate Gwen’s universe from the normal Marvel Universe. 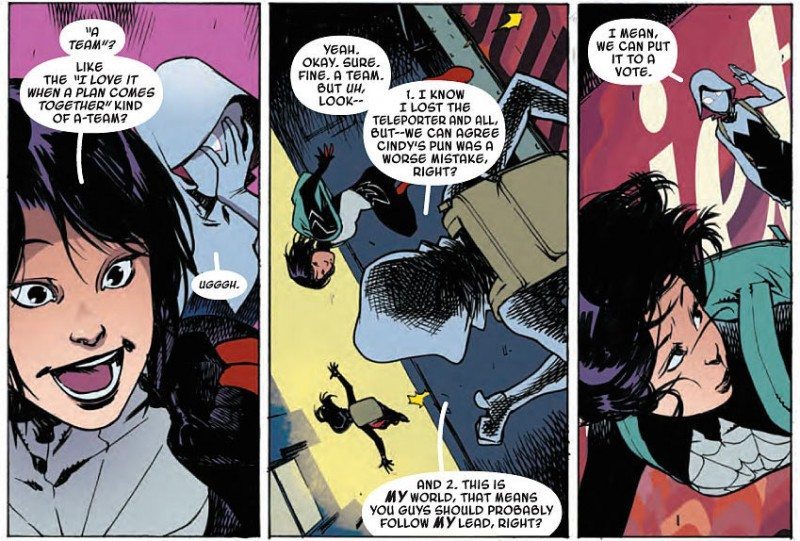 The major characterization highlight of the book to me is how Latour writes Jessica Drew’s character throughout the second half of the issue. The almost mother-daughter relationship between her and Gwen is really beautifully written, especially Jessica imploring Gwen to enjoy her youth while she can. Jessica’s later conversation with George Stacy might be my favorite scene in the series thus far. The two sharing a drink and discussing parenting so perfectly fits with the recent development of both of their characters and reinforces Jessica’s role as a surrogate mother to Gwen.

The art in this issue is admirably handled by fill-in artist Bengal, best known for his work on DC’s BATGIRL title. His art does a good job of being reminiscent of Robbi Rodriguez while still maintaining Bengal’s more rounded style. Colorist Rico Renzi employs his normal palette for the issue, which also aids in keeping the issue’s look in-line with the rest of the series. 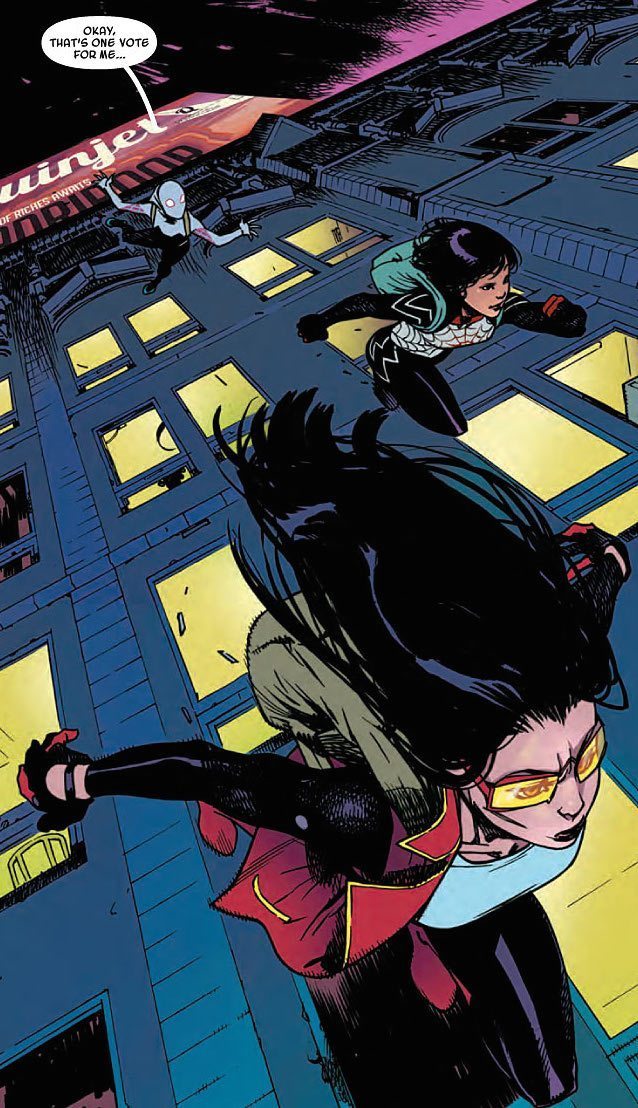 SPIDER-GWEN #7 is an easy recommendation for comic book fans, especially for those who are following the “Spider-Women” event. It’s well-written as usual, with fill-in artwork that holds up to the series’ standards.