The second issue of ‘Spider-Gwen‘ hits the stands, with a couple of off-notes – and some seriously cool twists!

When ‘Spider-Verse’ was first proposed, Dan Slott’s idea was that the spin-off character would be Spider-Ham.  He planned to bring Spider-Ham into the mainstream Marvel Universe, and do a sort of ‘Howard the Duck’ thing with the character.  Although wacky, two things conspired against Spider-Ham; the first was Marvel starting a ‘Howard the Duck’ comic, and the second was the runaway success of Spider-Gwen.  It was no surprise Marvel went with Spider-Gwen in the end.

And so, the surprise sort-of appearance of Spider-Ham in ‘Spider-Gwen #2’, while somewhat left-field, is actually amusingly appropriate.  My first reaction, in all honesty, was to consider this to be something of an off-note; but then, as I thought about it, I realised it was just logical to ensure there were continual consequences from ‘Spider-Verse’.

As should always be the case with a Spider-book, Spider-Gwen’s life is a mess.  She’s new to the super-hero world and making rookie mistakes – ones that leave her dad, Captain Stacy, in a tricky situation – and her personal life is putting on the pressure.  Whereas Spider-Man had the Daily Bugle, Spider-Gwen has the Mary-Janes, and they’re superb.  MJ in particular is a well-done caricature of the harridan she became at some points in the ‘90s, and the contrast is entertaining. 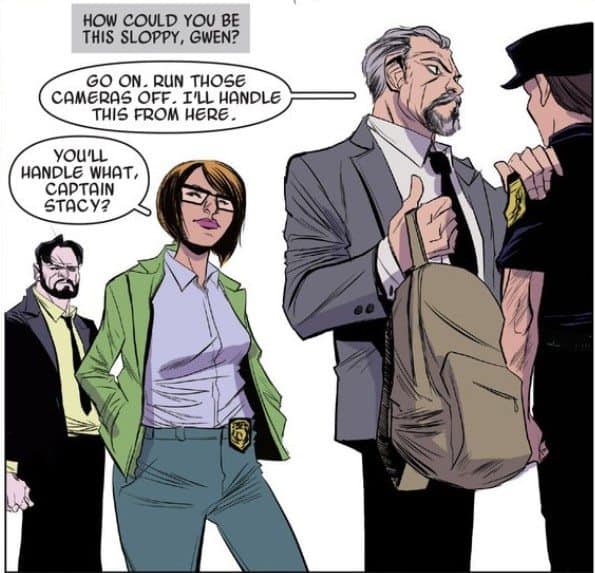 Meanwhile, the background cast continue to develop, and I’m fascinated to see where Latour is taking this.  He throws in some wonderful twists in the Kingpin arc, setting up a personal connection between the Stacys and the Kingpin, while all the time growing the scale of the threat.  A single beautiful panel of radar-vision increases the threat level, as we realise that – in Spider-Gwen’s world – lawyer Matt Murdock, working for the Kingpin, still possesses all his power and skill.

Another fascinating character is Frank Castle, whose path grows darker.  You can’t help suspecting that he’s on the road to becoming the Punisher of the Spider-Gwen world, but that this time it’ll go very badly for Spider-Gwen.  She’s quite clearly caught up in an escalating conflict between the man we all think of as the Punisher, and the Kingpin.  The scale can only go on the increase.

As before, Roddi Rodriguez’s art is distinctive and entertaining.  Stylistically, ‘Spider-Gwen’ is like nothing else out there at the moment, and that gives the book a freshness and vibrancy that really strengthens it.

A solid second issue, with perhaps a couple of off-notes – but otherwise strong.