There’s a dead body in the street, and a man determined to solve the crime. His name is Locke, and his imaginary friend — the large, blue panther — is Spencer.  These titular characters are the main event in the newest addition to Action Lab’s library entitled SPENCER AND LOCKE #1. This comic is written by David Pepose, penciled by Jorge Santiago Jr and colored by Jasen Smith. Some have called it the story of CALVIN AND HOBBES when they’re all grown up, given the similarity of the names and the character relationships. While the references are obvious, I think it’s much more than that.

I’ve seen crime media’s tendency to use the same archetypal characters over and over. But SPENCER AND LOCKE #1 shows us a new kind of hero — Detective Locke and his imaginary friend, Spencer. He’s a panther in Locke’s mind, though, in reality, he’s an adorable stuffed animal. Locke carries the doll with him during his investigations. Locke is aware that Spencer isn’t real yet still sees him and hears him just like any living creature. It’s an interesting dynamic that creates a character you can’t help but want to learn more about. We see hints at origins of Locke’s neurodivergence, but of course, the first issue doesn’t give it all away.

READ: Want to know more about the creator of CALVIN AND HOBBES? Read about him and his legacy here!

In the first chapter of this comic, Locke tries to figure out the murder of a childhood friend. We get flashes of cute drawings of them together, sharing their first kiss, against the harsh reality of her bloodied body on the concrete. In a way, this scene is reminiscent of the whole theme of the comic: growing up. What happens when a child and his imaginary friend don’t grow up, but the world around them does? That’s what SPENCER AND LOCKE explores, using smart, quick dialogue to move along the story at a thrilling pace. We follow Spencer and Locke as their journey explores places from Locke’s childhood in order to retrace the steps of the woman’s disappearance, all the while getting an insight into his rather dark past. 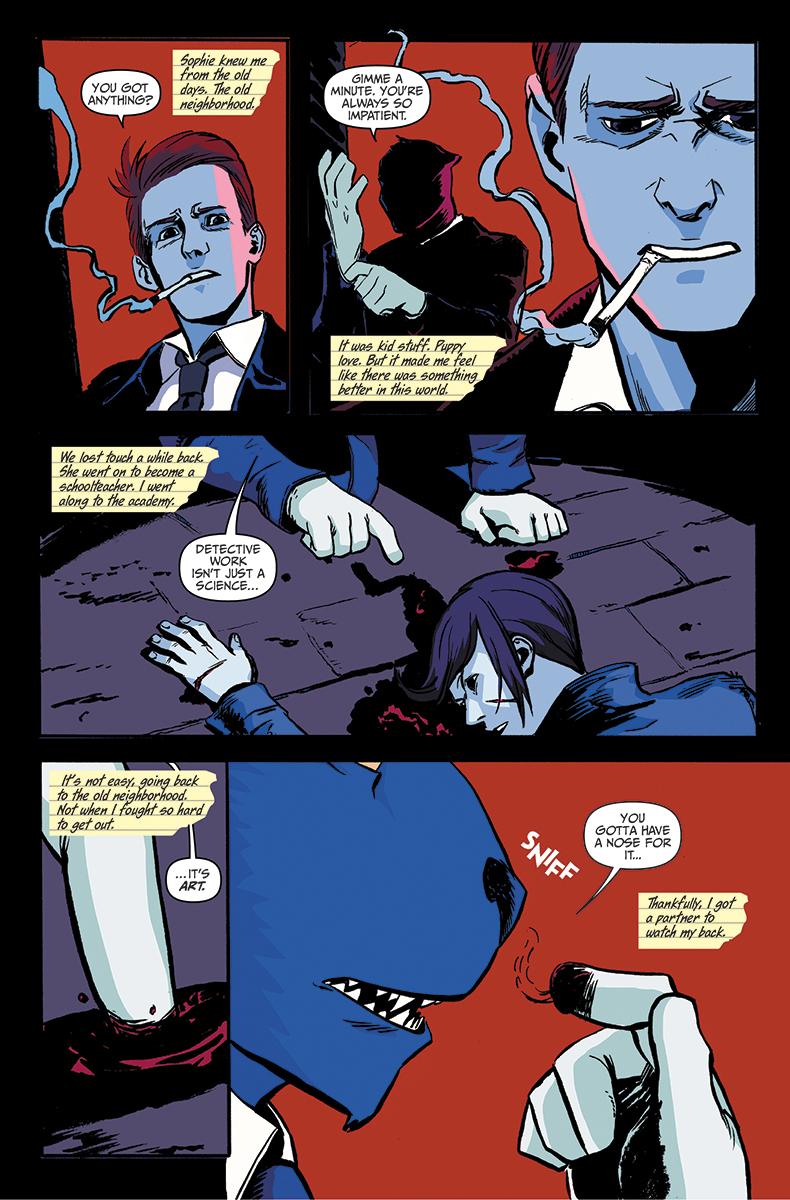 The art switches between a semi-realistic, gritty style to portray the present and the Calvin-and-Hobbes-like design to reference the past. It’s effective in creating the dark atmosphere of SPENCER AND LOCKE while introducing a contrasting style to shake things up, just like the plot itself. On the one hand, it’s a story about a man investigating a brutal murder. On the other, he does so with a stuffed animal that he talks to the entire time. It’s an interesting blend of darkness and innocence that shakes the reader up in what they think they know about crime comics. I also enjoy the traditional art, even if it is a simulated effect. It conjures the feeling of old time crime comics, as I’m sure it’s meant to do, rather than newer, digital-based art.

The ending is full of as much suspense as the end of a first issue should be. SPENCER AND LOCKE #1 does a lot of things well, especially things that make for a good first chapter. If the first part of a story isn’t thrilling, or if the characters aren’t interesting enough, it’s tough to convince yourself the next issue is worth the price. But that’s not the case here. I’m already waiting for the next installment to pull me in.