Created by Ivan Brandon (DRIFTER, Wolverine) and Jason Latour (SOUTHERN BASTARDS, LOOSE ENDS), BLACK CLOUD #1 is an incredible examination into the importance of stories and narratives in society. Zelda Barrett, our main character, chronicles a world of dreams, where thought and perception are far more powerful than in ours. As artist and colorist respectively, Greg Hinkle (THE RATTLER, AIRBOY) and Matt Wilson (PAPER GIRLS, THE WICKED + THE DIVINE) bring their unique artistic talent to BLACK CLOUD, vividly crafting the dimensions of Brandon and Latour’s story.

BLACK CLOUD #1 is a wonderfully overwhelming experiment in fantasy. Brandon and Latour set the story between two worlds – Zelda’s and New York. New York has had a history as a place where stories land, settle and converge. Setting the story in modernity is especially significant. In the bustle of modern life, we tend to forget that we create and participate in each other’s stories on a day-to-day basis. BLACK CLOUD #1 reminds us that story creating and telling are active and constant, not just passive and static traditions of the past. However, despite this, a consequence of living in a busy, populated city like New York is that we do often miss the finer details in the backdrop of our own plots. BLACK CLOUD #1 makes a subtle commentary on the characters we overlook, marginalize, and silence. We do not find them inviting and block them out, taking from them their agency, their ability to tell their stories and to participate. In contrast, Zelda’s world is defined by its stories and is populated by those committed to their own stories. The people rarely ever leave and seem to live in a structured order, unlike the chaos of our world.

Latour and Brandon explore this incredible plot and the importance of the storyteller through lenses of the psychotropic, anthropomorphism and the power of the name. Hinkle and Wilson’s incredible artistic talents go hand in hand as they bring to life these themes and the details of this journey. Hinkle seamlessly switches between fantasy and modern-urban, introducing this issue with a scene depicting ancient and mythical interactions between storytellers and their beasts. He’s able to capture Zelda and her interactions in New York in what is almost a snapshot – skyline, hot dog cart and all. Later, his depiction of Zelda’s otherworldly journey with Todd, a wealthy teenage deviant impressed by what he assumes is Zelda’s stash of reality-warping drugs, and what Todd perceives, is phenomenal. Unsurprisingly, Hinkle flexes his command of fantasy in more than one way. The bar, the characters Zelda interacts with, and the architecture and creatures in Todd’s perception come from an almost entirely different sub-genre of fantasy than in the introductory scene.

Furthermore, Wilson’s coloring naturally shifts in tandem with the rest of the creative team’s work. In the seemingly epic and mythological beginning of the issue, he opts for darker hues, reminiscent of bleak conflict-heavy settings in high and medieval fantasies. However, the spark and fire of creation come through as Wilson illustrates the early storytellers’ powers in bright and forceful bursts. As the plot progresses, the vibrant coloring highlights Zelda’s power over characters, her surroundings, and the wonderful contrast between her world and ours. The electric hues and pastels act as a plot device, allowing readers to understand Zelda’s trans-dimensional movements through her monochrome world, and introduces forces that might work against her.

READ: Why are color and color theory important in comics?

Zelda herself is a fascinating character. In an interview with ComicsVerse, Latour described Zelda as an exiled revolutionary “from a strange land where the strongest imagination rules.” She is a descendant of a line of powerful storytellers, which seems to be her curse and her blessing. She is between worlds, almost powerless in ours and somewhere between feared and unwanted in hers. A recurring motif associated with Zelda is faith. She promises Todd dreams beyond his imaginative capability if he believes and has faith in her. The animosity between Zelda and a bar owner in her world is evident and peaks when he tells her he no longer ‘buys’ her story. Faith plays a large part in the relationship between storytellers and their audiences. An audience has faith in the storyteller to weave an authentic, compelling, and fulfilling tale. If for some reason Zelda has used a story in bad faith, to acquire something from her audience or to manipulate them for some means of power outside of their established contract, then the faith and the relationship are sullied. 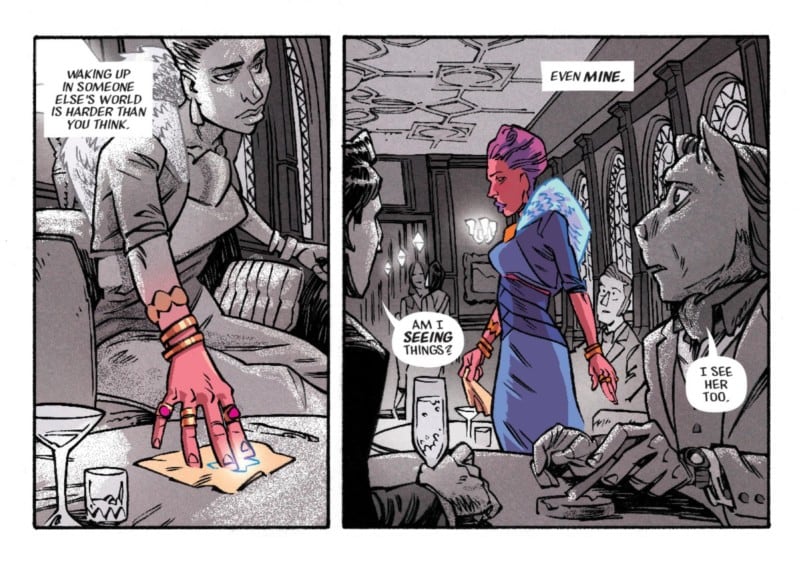 More importantly, I think choosing to portray Zelda as a black female character was a crucial creative decision on Latour and Brandon’s part. Zelda has the power of creation and communication through her storytelling. She is feared and shunned for it and is weak without it.  She is left to barter it off to the likes of Todd and his father, who are incapable of understanding who she is and what she comes from, to survive in a chaotic, narrative-deprive world. The power of storytelling has been a long appreciated and understood concept across cultures, but the stories of persons of color (especially women) have historically been silenced or altered. It’s one of the issues at the root of discussions on representation, empowerment and the diversity of stories and perspectives across industries today.

READ: Why do we need more POC women in art? Because misogynoirist reactions are still rampant

BLACK CLOUD #1 establishes worlds and characters that are nothing less than witty and captivating: a testament to some of the strongest imaginations in the industry. Its creative team has produced an impeccable ode to storytellers, New York, and the fantasy genre. On incredibly high recommendation, BLACK CLOUD is a comic for fans of the stories like Neil Gaiman’s ONE WEEK IN THE LIBRARY and CASANOVA.