On February 6, 2019, the latest chapter of IDW’s SONIC THE HEDGEHOG begins with Issue #13, and I can’t be more excited. SONIC THE HEDGEHOG #1-#12 have already left a remarkable impression on me, both as a reader of the series and as someone who grew up with the games and Archie comics. So, as a way to prepare for the next arc in the series, we at ComicsVerse wanted to write a retrospective to show what the series has done so far, and what we hope it might do going forward.

With a Solid Grounding in the Sonic Canon, We Look Forward to Seeing What New Things Will Come

If you haven’t read SONIC THE HEDGEHOG #1-#12, then a bit of recap will be necessary. And even though it’s easy to sum up the main conflict, I should note that the rate at which the writer, Ian Flynn, paced things was superb: he kept me surprised and guessing throughout it all.

Basically, the first 12 issues of the series were a mystery. Fresh off the heels of the video game Sonic Forces, Eggman is defeated (and missing), but his robots remain. As such, the Resistance — led by Knuckles and organized by Amy Rose — remains vigilant to ward off rogue robot attacks. It’s when Sonic and Tails (both free agents at this point) notice a higher level of coordination in the robot attacks that the series introduces the mystery: who is leading them? The answer ends up being Metal Sonic.

The choice to make Metal Sonic the antagonist meant that the story, with all of the twists and turns, is basically the same as the video game Sonic Heroes. In that game and SONIC THE HEDGEHOG #1-#12, Metal Sonic is trying to lead the Eggman Empire. As someone who played Sonic Heroes, it’s obvious that Ian Flynn did know this: not only are some plot points similar (Metal Sonic impersonating Eggman) but even Metal Sonic’s ultimate form is heavily influenced by Metal’s appearance in the last level. 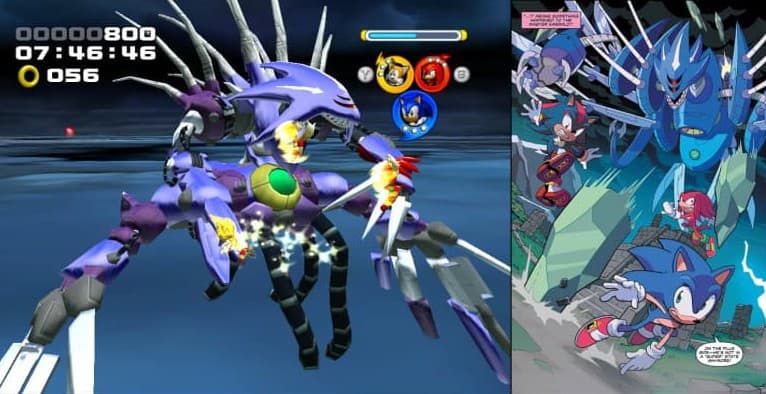 Side-by-side, it’s easy to see the resemblance. Images courtesy of IDW and Sega.

Even still, I don’t think this harms the story in the comics. It is true that Metal Sonic in the game and the series have the same end goal, but their initial motivations are very different. In Sonic Heroes, Metal is attempting domination in spite of Eggman — and the evil genius hides in fear. In the comics, though, Metal is attempting to restore the Eggman Empire to its creator because he is indisposed. And the reason for Eggman being out of the picture is what makes it obvious that the comics have more than a superficial similarity to the video games driving them.

What Story Will Come Next after SONIC THE HEDGEHOG #1-#12?

Although Metal Sonic’s story is the primary tale going on in the comics, the biggest surprise for me was the subplot with Eggman. When Ian Flynn first introduces him, his memories are completely gone, and he goes by the name of Mr. Tinker. He’s an altruistic, gentle soul — so much so that Sonic fights Shadow in defense of letting the amnesiac genius be. Although I knew it wouldn’t last, I really liked this plot point. 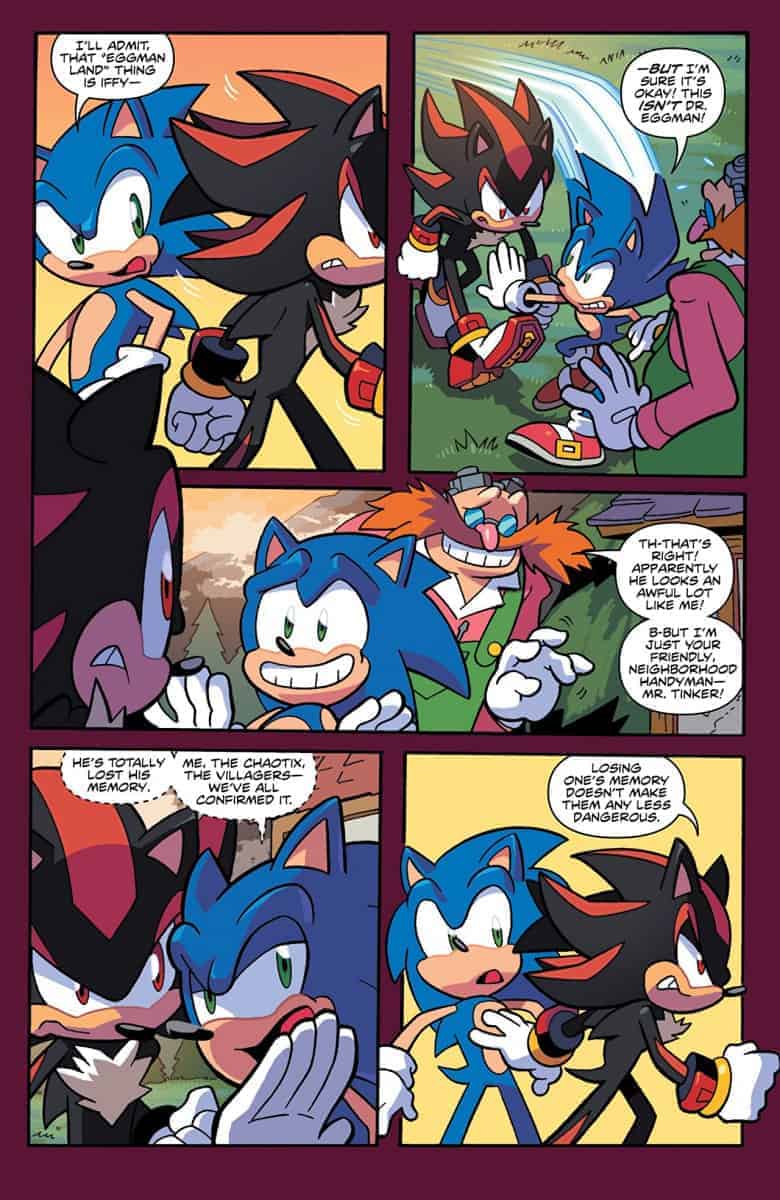 Yet as the chapter in the series closes, Eggman is back to his normal self. This is the work of a new character for the series, Dr. Starline, and I’m still uncertain about his motivations. The doctorate-duck seems very intent on impressing Eggman, and, if I know Ian Flynn, there has to be an ulterior motive. I just wonder if Dr. Starline realizes just who he brought back.

Either way, the series is set for something completely new, and I couldn’t be more excited. In fact, SONIC THE HEDGEHOG #13 seems like it will pick up this subplot as the main plot going forward.

The Characters All Have a Purpose — and Serve that Purpose Well

One question I had going into the series was how Ian Flynn would choose to innovate. Although he might do a stupendous job with the plots, I think the characters are where this series especially shines.

For one, how can you make old characters seem new? Yet even if they are old, Flynn breathes new life into them throughout SONIC THE HEDGEHOG #1-#12 by giving them compelling ways to contribute meaningfully to the plot.

In no place is this is more evident than in the last act of the series. The three-issue long “Battle for Angel Island” gives each character a chance to shine with what makes them special. For Tails, it’s lateral thinking and technological aptitude. For Amy Rose, it becomes her newfound skill in logistics and command. And for Blaze and Silver, it’s pushing themselves to the limit of what their supernatural abilities allow. And for the Chaotix, Rouge, and Shadow, it’s… behaving as they are expected to. 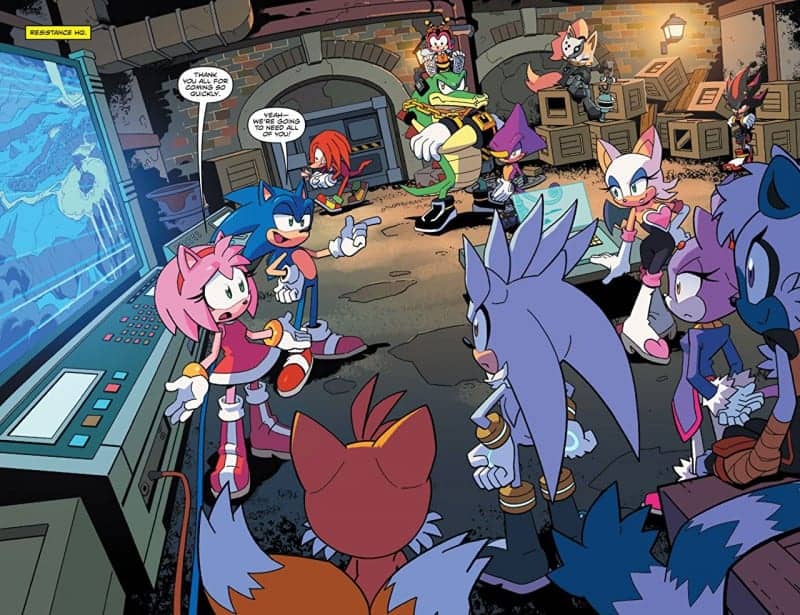 Amy and Sonic gather the main cast for the upcoming fight. From Issue #9, courtesy of IDW.

But what about Sonic and Knuckles? For the latter, Knuckles actually seems to have regressed a bit from how he’s been portrayed in the history of Sonic comics. He’s lost a bit of his serious responsibility as the sole guardian of the Master Emerald. Now, he’s a gruff, comic foil to Sonic’s wit — and that’s an artistic choice I can understand. Archie’s SONIC relied on angst to fuel Knuckles’ drama, and I don’t mind the character moving away from that. 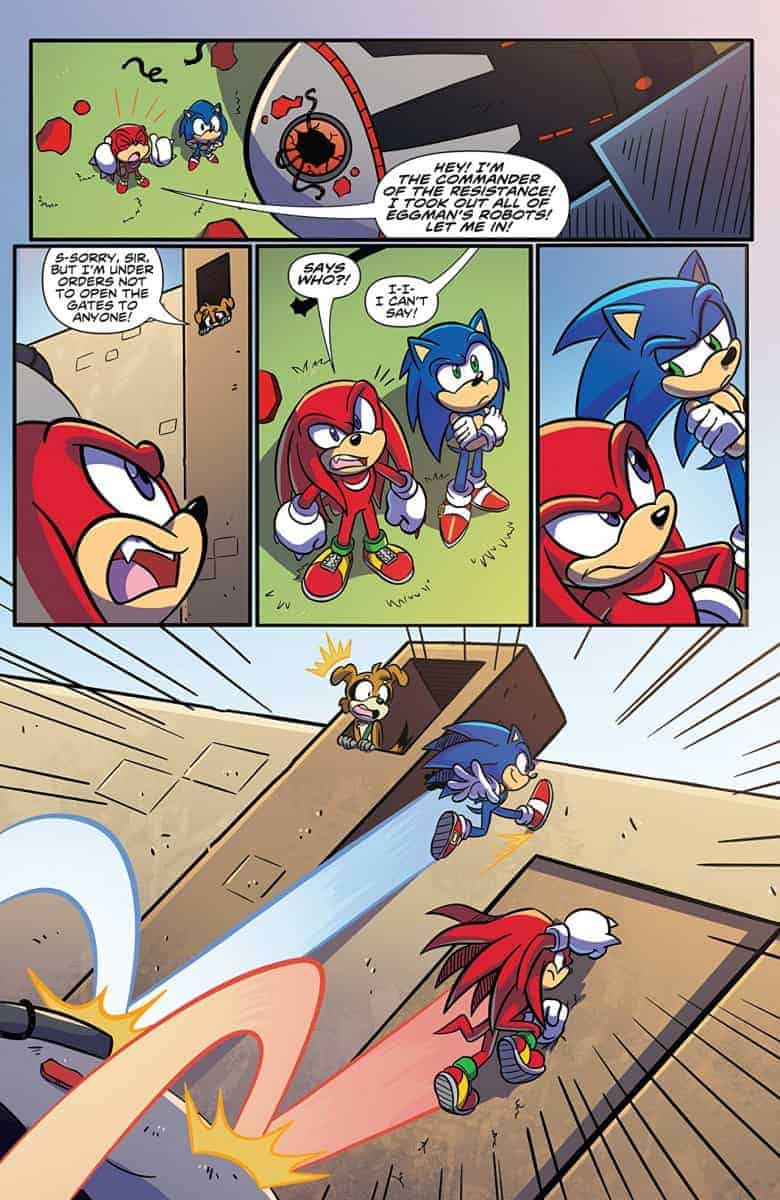 As for Sonic, I really like the balance Flynn has added to his character. Sonic in the video games has been characterized mostly by his flippant, superficial attitude as of late. Flynn keeps Sonic’s attitude, but he makes it fun-loving and based on compassion. Even though I don’t think Sonic has aged in canon, he feels like a more mature character.

But if old favorites aren’t enough, the new characters are here to stay, too. For the heroes, Tangle and Whisper round out the emotional ends of the core cast. Tangle is very enthusiastic and social — what she brings out in other characters makes her interesting. Whisper, on the other hand, is a reserved taciturn who is compelling in what she’s hiding. They’re both great fun to watch on the page, and I look forward to seeing more of them (but more on that below).

Whisper and Tangle show off their combat prowess in Issue #10. Image courtesy of IDW.

As for the villains, it’s good that Flynn gave the comic relief to Rough and Tumble. They are earnest bullies, with simple motivations and very clear ways of getting what they want. This is good for a Sonic series. The villain who is leaving me uneasy, though, is Dr. Starline. I don’t — do not — trust someone who revives Eggman out of respect for him. There is an ulterior motive — mark my words — and I love that.

The Artwork Hearkens Back to Archie SONIC but Remains New

I would be remiss if I didn’t talk about the art of SONIC THE HEDGEHOG #1-#12. It’s hard to divorce Tracy Yardley‘s illustrations from Ian Flynn’s scripts, as the two have worked together since the Archie series. Yardley’s is a distinct style that uses crisp detail to cover the action so typical of a Sonic story. At the same time, he’s able to pull off a nuance to reveal snapshots of the character’s emotional states. 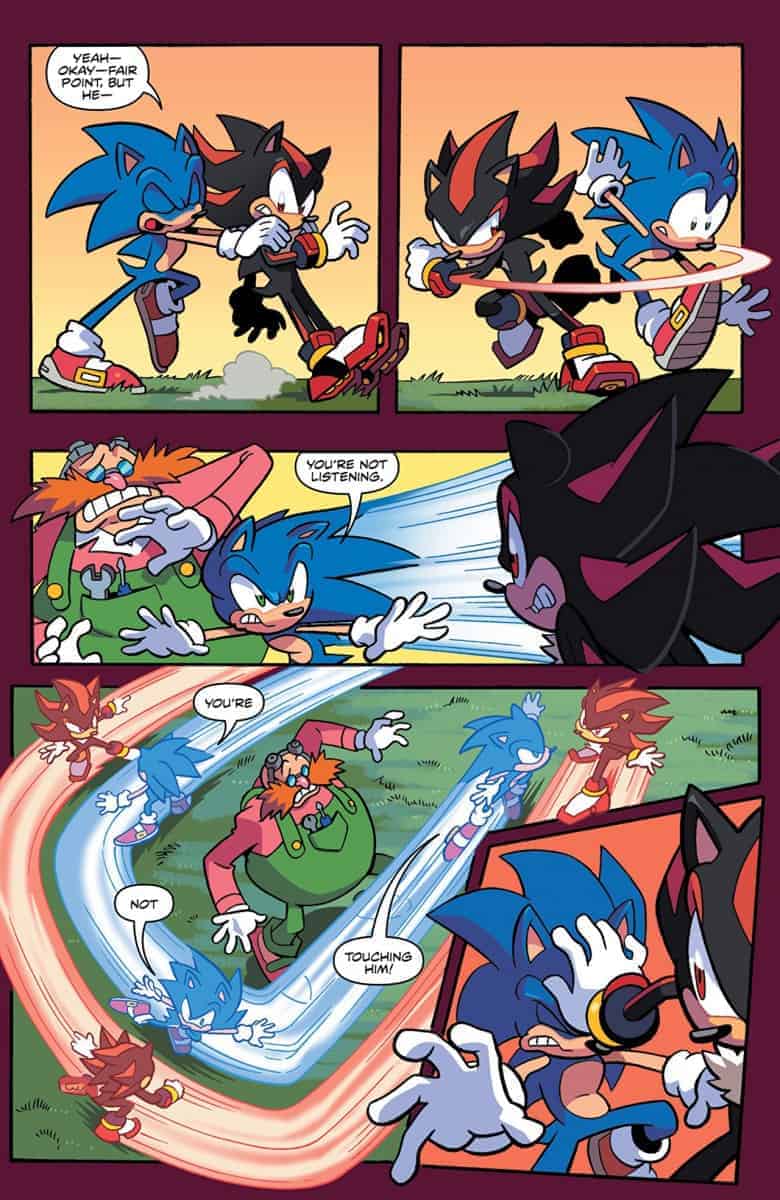 But the artist who has surprised me the most is Evan Stanley. Although she has been drawing Sonic for many years, I didn’t catch her work in Archie. Nevertheless it has been a joy to see her art, both in what I would say is my favorite issue, art-wise (#4), and in her collaboration with Tracy Yardley for issues #10-#12. It’s true that you can tell she was inspired by him, as she says in her SONIC THE HEDGEHOG #12 interview, but her art stands as her own. Whereas Yardley tends to use the same form of expression for each character, I don’t think I’ve seen the same face on any of the characters she draws. I look forward to seeing more of her work in the future. 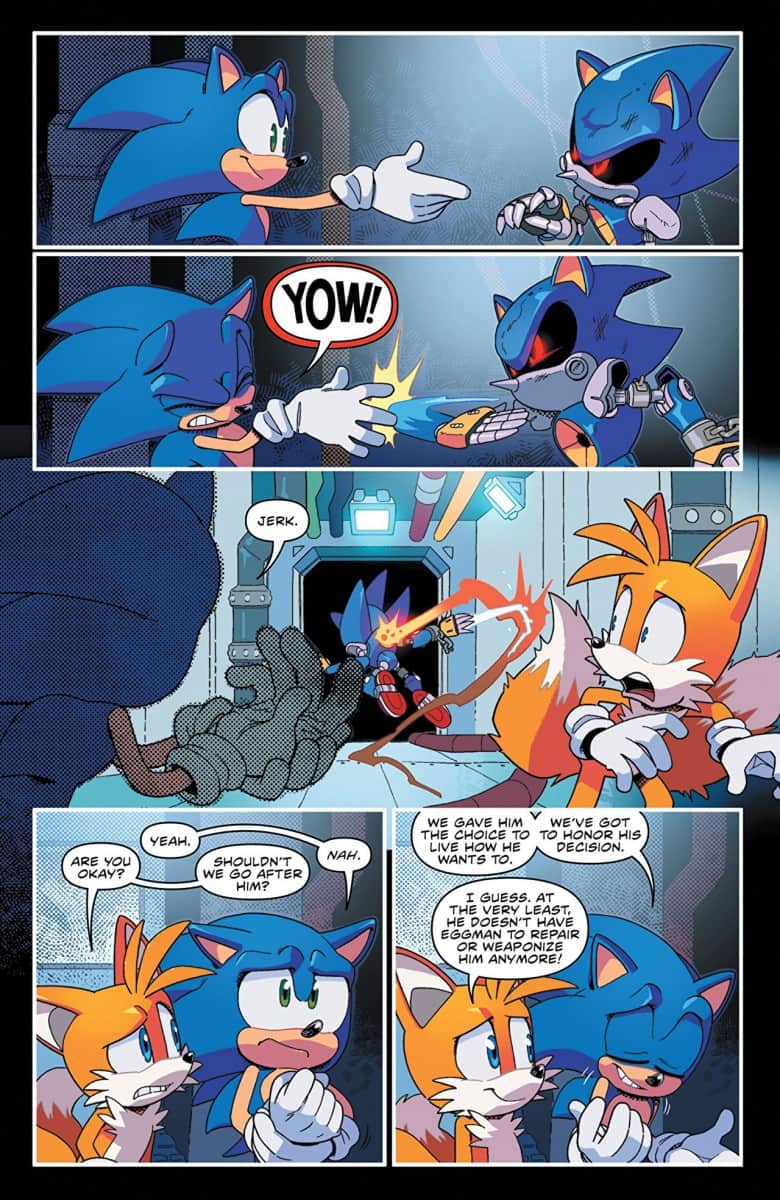 Unfortunately, we haven’t seen Jennifer Hernandez and Adam Bryce Thomas featured as much as the other two in the comics themselves. Nevertheless, what I did see I loved. Hernandez drew what I would say is the funniest issue thus far (#3; see the image above), and Thomas hearkens back to the realistic style of Patrick Spaziante of Archie fame: 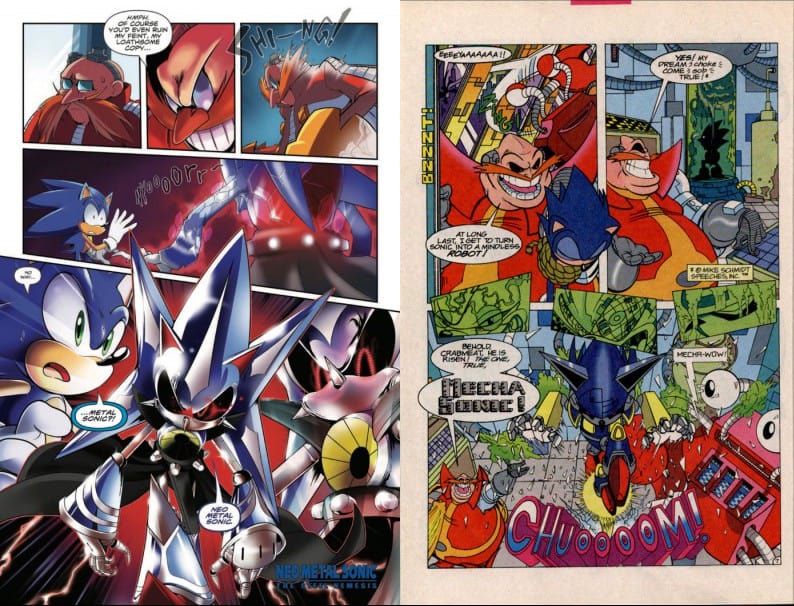 What will be the future of the series after SONIC THE HEDGEHOG #1-#12?

What can we learn from Archie’s SONIC?

So what can I say about SONIC THE HEDGEHOG #1-#12? I’m happy, content, and excited, both as a fan of Sonic comics and as a comic reader in general. It’s been fun to see a Sonic series start off with a defined tone and follow through with that.

For an example of what I mean, look at the covers for both Archie’s and IDW’s issue #12: 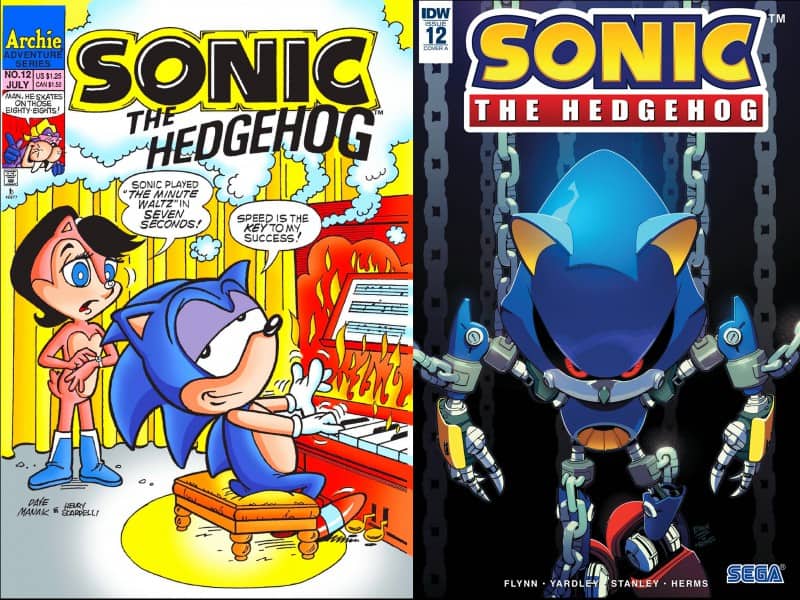 Images courtesy of Archie and IDW.

As you can see, both are a little different. Michael Gallagher, whose publishing credits included working for Mad magazine and GUARDIANS OF THE GALAXY wrote the early issues of Archie’s series. As he describes it himself in a 2003 forward to SONIC THE HEDGEHOG: THE BEGINNING, Archie asked him if he would adapt SONIC after having written a few BETTY AND VERONICA stories. Being a young freelancer, he took the job.

Therefore, the early comics had a light and humorous tone with a touch of satire. And to be honest, they’re some of my favorite Sonic comics for that reason. This is because the tone would change, as Archie hired more writers. Ken Penders and Karl Bollers, for example, were more interested in dramatic lines. This is a natural process. To quote Gallagher himself:

And so Ian Flynn’s work as a Sonic writer is just the latest iteration of a process Gallagher and the others began and carried out in their own way. In Flynn’s work on this series, I’m happy to see that he has maintained the same quality as he did for Archie. Yet as he continues, I hope that this series will evolve and change to become its own distinct entity. So far, though, I think he’s doing a good job. To quote Gallagher again, Flynn has already heeded this advice:

Regardless of what we may speculate, IDW has published the production schedule. The creators have the series plotted out until Issue #16; there will be a mini-series for Whisper and Tangle. There has been an adaptation for SONIC TEAM RACERS, so Sega’s influence won’t be forgotten either.

The future of IDW’s SONIC THE HEDGEHOG is secure, I feel, and I’m very happy to say that. And after reading Issue #13, I can be certain that it will be an exciting time for the Blue Blur racing forward into time.