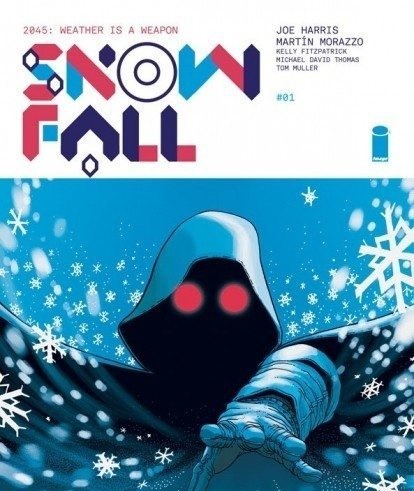 What if weather was a weapon and corporations used it to control the world? That’s the premise of SNOWFALL, an enjoyable new Image Comics series that reunites GREAT PACIFIC writer Joe Harris and artist Martin Mazzaro.

Like GREAT PACIFIC, climate change is at the forefront of SNOWFALL. Whereas GREAT PACIFIC examined the world through a more satirical prism, SNOWFALL appears to have gone the post-apocalyptic route. In the future of 2045, climate change has rocked the world, dismantling the old government power structures and transforming the United States into the Cooperative States of America, which is also the Hazeltyne Corporation. Hazeltyne uses climate to control the populace, creating its own schools to disseminate its version of history. A few skeptics remain, though, including student Anthony Farrow.

The book begins with snow falling, the first snowfall in over ten years, artificially created by a mysterious figure and urban myth known only as the White Wizard. Farrow hunts down former Hazeltyne employee August Reasons, who, coincidentally, disappeared around the last known sighting of the Wizard.

READ: Love SNOWFALL and Image? Check out our review of GREAT PACIFIC!

Davitka Johnston Deal is Hazeldyne’s inspector charged with investigating the snowfall and the pursuit of the White Wizard. She is an extremely competent weapon for Hazeldyne’s corporate overlords, but they see her as nothing more than a tool and continually refuse her requests for information. 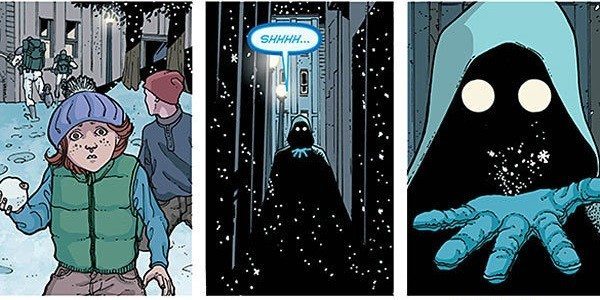 The plot moves at a brisk pace, with Johnston and Farrow peeling back the different layers of the White Wizard and the Hazledyne Corporation, respectively. The White Wizard is a fascinating character due to his enigmatic motivations. Why did he disappear? Why did he come back now, and most importantly what does he want? Hopefully, in future issues, we will learn just exactly what it is that drives both the Wizard and the Company.

Unlike many futuristic books that suffer from far too much exposition, SNOWFALL can suffer from too little world-building, which can disorient the reader. The descriptions mention Hazledyne as both government and corporate entity, but its main function is still unclear after two issues. Sometimes the book can toe the line between mystery and confusion. I found myself going back to different panels, as the book also changes settings somewhat jarringly.

READ: Love Image? Check out 3 reasons why Image is a top publisher here! 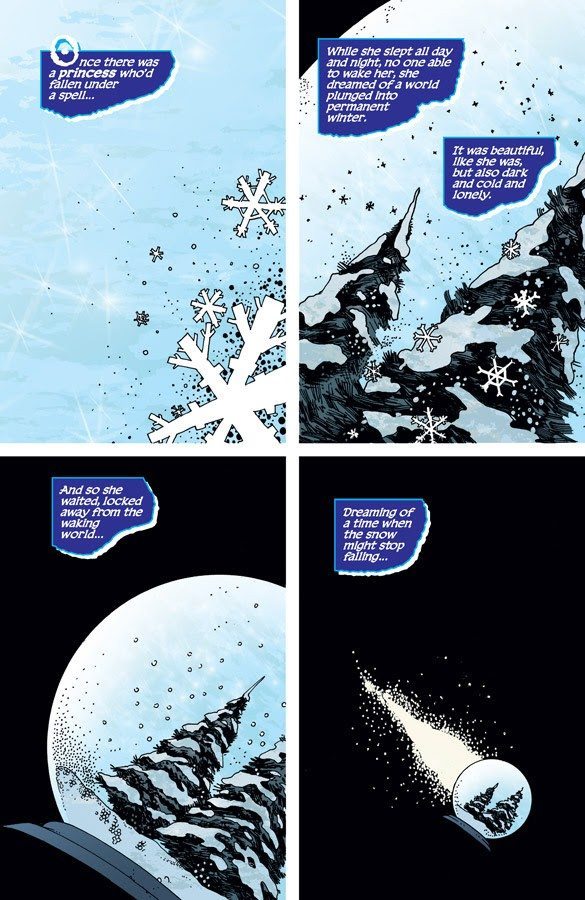 Martin Mazzara’s art shines with rich futuristic environments, outfits, and, most fittingly, weather. The White Wizard’s design, featured on the cover of issue #1, is bold and eye catching. However, as in GREAT PACIFIC, his character work can look unfinished and slapped together, which can be disengaging.

Through the first two issues, SNOWFALL showcases a visually stunning, bleak environment, even if it’s lacking in certain details. Mysterious characters abound, and many of their motivations remain obscured. However, I, for one, am excited to see where it goes next.