Have you ever stopped to think about the fact that Selena Gomez reaches 112 million people every time she posts a picture to Instagram? Now, assume that about 50% of those people actually love Selena Gomez and would do anything to be her. Shouldn’t that be the key to complete and utter happiness?

This is just one of the many questions contemplated by Bryan Lee O’Malley and Leslie Hung’s SNOTGIRL; an Image Comic that takes a look inside the life of an extremely popular fashion blogger, or at least famous enough to warrant an unpaid intern. As a rabid fan of SCOTT PILGRIM, everything Bryan Lee O’Malley does has always been headline news for me.

However, SNOTGIRL was a project that I was immediately worried about because I had secretly taken up a new cape and cowl: defending famous Instagram models. Thankfully, I can now say with as much authority as I have that SNOTGIRL paints a realistic and important picture of the power of the false Instagram identity while simultaneously showing the insecurity and superiority that much fake love creates in the Instagram models themselves (Yes, that was a subtle Drake reference. I know. I’m impressed too).

My fascination with Instagram began sometime in 2015 when one of my best friends at college became obsessed with Kim Kardashian’s Instagram after moving to LA. She loved the apps, the kimojis, the gram, etc. It even began to spill over into love for other Kardashian media: Kendall and Kylie Jenner’s Instagrams and Khloe Kardashian’s phone app. And like any good friend, I followed along with her. Soon enough I was a major fan of tons of different Instagram models, YouTube Beauty Bloggers, etc.

Then came Essena O’Neill. You might not remember her, but I do. Why is she famous? Well, she is famous for very publically quitting her life of “self-promotion” on Instagram and condemning everything it stands for, even pointing out the fact on multiple occasions she took hundreds of selfies in an attempt to get that perfect “hot” photo. She was the first person I have ever truly seen who actually owned and revealed that social media, especially Instagram, is totally phony.

SNOTGIRL makes a similar point but in a much more subtle way. First, SNOTGIRL, in concept, is already a subversion: A beautiful Instagram model (hot) secretly has the world’s worst allergies that cause snot (gross) to get all over herself and others. However, the subversion is more deeply ingrained into the story. 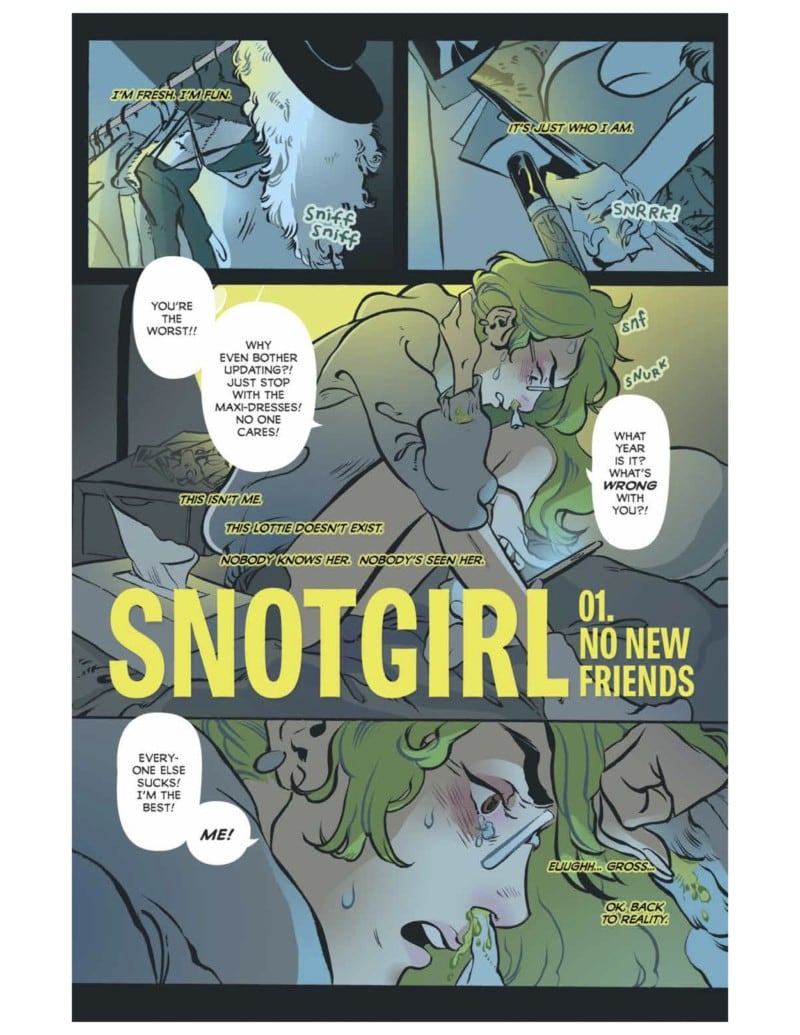 The above panels are part of our introduction to Lottie in the first few issues, and like more than a few protagonists of Bryan Lee O’Malley, she has a few flaws. She is self-obsessed, insecure, hypocritical, allergy-ridden, and rash. She makes split-second decisions that accidentally alienate her from her friends and followers. She hates it when her new best friend Coolgirl gives her the nickname “Snottie” even though Lottie only refers to all of her friends with nicknames that aren’t always nice like “Normgirl.”

Basically, Lottie is extremely complicated. Much like Essena wrote when she left Instagram, and as Lottie says in the fifth issue, fashion bloggers and Instagram celebrities are not perfect, even though their online life might seem to be. It is all an act, and sometimes, the pursuit of said act can make you unhappier. All of the unsavory parts of Lottie’s personality tend to be exacerbated by the online persona she is striving so hard to maintain. She is insecure, so even if a million comments praise her, the bad ones always stick out. She is an extremely competitive person, so she has to be the best blogger ever and cannot be usurped by anyone, and so on and so forth. Also, it leaves Lottie in a place where she is unable to truly understand herself and others.

For example, when Lottie meets her new mysterious friend, who she immediately dubs Coolgirl, she thinks that Coolgirl has an effortless awesomeness. She sees Coolgirl as a goal that she can achieve, someone who isn’t like her flaw-ridden self. The irony, of course, is that as a person who is professionally perfect in public while being flawed at home, you would think that Lottie would be able to see right through this. Instead, she simply buys the act hook, line and sinker, just like her avid follower Charlene does. It doesn’t matter that Lottie is a super famous fashion blogger. When faced with someone who seems more effortlessly perfect, she can’t help but buy it and want to be that kind of perfect. Unfortunately, the cycle continues.

Another issue Lottie struggles with is determining who her actual friends are. Throughout the five issues, Lottie is surrounded by her “friends,” who all happen to also have their own fashion blogs with their own very distinctive styles. The only other friend Lottie seems to have outside of this is a thankless assistant who supports Lottie in every way possible. These friendships seem weak at their best. Lottie is constantly being called out by Cutegirl, and her other friend, Normgirl, always invites Lottie’s ex, who she is totally not over by the way, to every social event they attend.

Ironically, because of Lottie’s intensely competitive streak and her long line of unfounded insecurities, she finds every piece of advice as a barb of criticism. Instead of understanding that her friends are worried about her acting rashly and regretting her actions, all Lottie can hear is, “OMG, You guys are all acting like I’m high key psycho.” This complete denial, of course, spirals until Lottie becomes a completely unsavory person in some situations: yelling at friends, pushing people in pools, and even murdering new best friends… maybe?

However, Lottie discovers over the five-issue arc that while her friends might be difficult, they are honest with her. First of all, when you make as many mistakes as Lottie does, you need more than just a little real talk. You need friends who set you on the path to success. You need friends who remember when you told them that you couldn’t drink on your new medication like Normgirl. You need friends who always remind you to keep in perspective those bad comments you got like Lottie’s assistant. And you need friends like Cutegirl who, um, always ditch you for Japan and tell you, you just got owned? Okay,  I haven’t figured that one out, but regardless, you need real friends. Friends who might give you a little tough love to get you back on the right track.

While I was initially worried about the series, I have come to love SNOTIGIRL because it acknowledges that while Instagram and beauty blogs are beautiful, everything underneath (like our fears and emotions and issues) is gross and ugly. And not only are the insides gross and ugly, but it’s also a 100% okay that they’re so gross. It might be cliché to say, but “beauty is only skin deep,” and when the perfectly crafted image that took you and an intern hours to curate is forgotten, you always have to live with yourself. And if you can do that, then maybe, like Lottie, you need to take a good look in the mirror and try to figure out why you’re so unhappy. The answer might be gross, but that doesn’t mean it isn’t worth discovering.