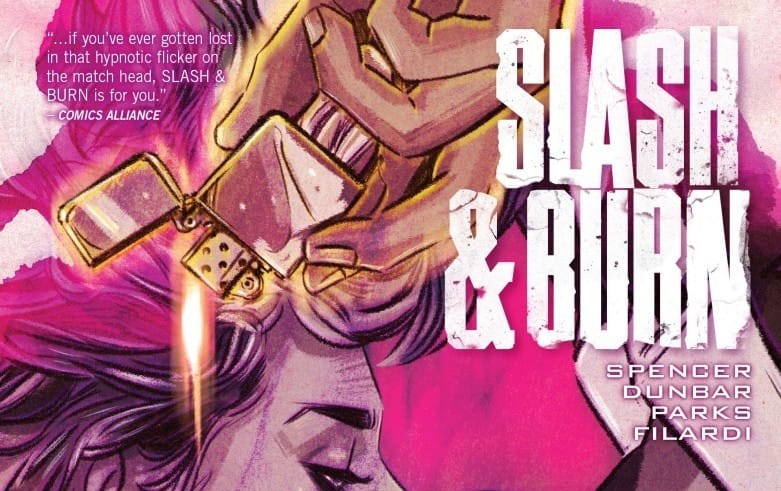 Writer Si Spencer reunites with artists Max Dunbar and Ande Parks to kick off the new year with the latest issue of SLASH & BURN, and let me tell you, this story is only getting hotter than before!

SLASH & BURN follows Rosheen Hayes, a defiant firefighter with a headstrong personality, as she tries to figure out the mystery behind a fire in an occupied storage unit from the first issue. Rosheen’s interest is piqued by the realization that this fire might be somehow connected to her dark past, and it’s up to her to put an end to the series of fires that have been plaguing her hometown. SLASH & BURN #3 picks up with the same momentum from previous issues and delivers a thrilling continuation as the story unfolds.

Rosheen’s flashbacks of her childhood unveil more about her history with the clan of kids she grew up with in the orphanage. The friendships between the children are primarily focused on lighting up whatever they can find for shits and giggles. This, however, introduces us to all the people that are miraculously blasting from the past and right into the case. Not only that but also clues are now popping up during her firefighting. After a fire has been put out by Rosheen and her team, she finds the necklace that was once owned by her childhood friend, Jess, hanging off the body burned from the scene. She also finds a note slipped into her pocket during a medal ceremony for her friend and colleague, Lucy Kemp. All these clues and hints hinder Rosheen as she spends her days not just fighting fires but now her past too!

READ: Check out our review on the first issue of the new comic book, DELUGE!

I first learned about SLASH & BURN after seeing the first issue jump out at me on the shelves of my local comic book store. All the covers are done by the incredibly talented Tula Lotay, and they catch your eye. I’m a fan of many of the stories that come out of Vertigo, and this series is right at home on that list. Spencer’s writing digs deep into the thoughts rushing through Rosheen’s head as she is challenged by her complicated relationship with fire; a constant presence that’s been a catalyst for everything in her life. From killing her parents to forging friendships in her childhood and even now in her professional life as a firefighter. But the need to keep it as a dependent variable for living a somewhat-sane life really plays into the way her character is developed. Spencer challenges her in the series, and we get to see her push through and take control. It’s also exciting to see a female protagonist own a comic like this and showcase the sort of traits that we tend to look for in comic book heroes. Vertigo always offers titles with relatable themes for readers, and this one truly brings it home with its dialogue and writing.

LISTEN: If you’re still burning up from this hot review, hear our podcast on X-MEN‘s Storm!

The artwork on every page highlights how perfect Dunbar and Parks work together or the story. Nick Filardi on colors also sets the tone for the comic, displaying a vibrant color scheme for the series. If it’s not the strong, clean linework that impresses you, it’s probably going to be the flawless colors and incredible character design in each issue. Rosheen also consistently uses fire as a metaphor to describe her emotions and things happening in the story. This gives the creative team a lot of freedom to expand on these metaphors to create imaginative scenes as Rosheen walks us through the investigation. 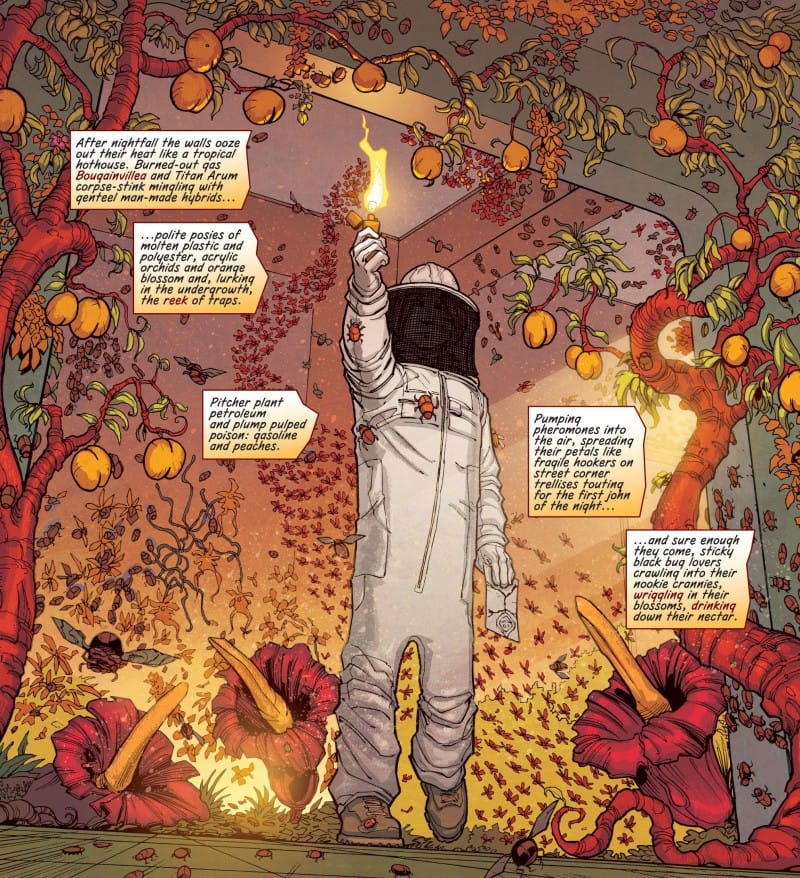 SLASH & BURN is quickly becoming one of my favorite new comics this year after being utterly blown away by how strong a presentation these first few issues have been. I can’t express how stoked I am for the next issue, only because I know this book isn’t holding back and seems to have plans to burn down any excuse comic book fans might have for not picking it up yet.