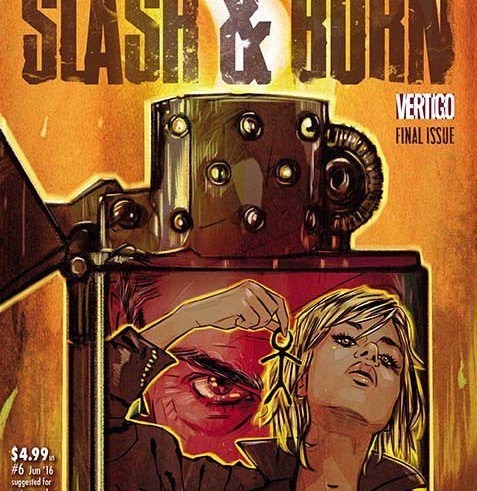 SLASH AND BURN #6 is the final issue in Si Spencer’s six part mini-series. After considerable twists and turns, the culprit behind the murders of Rosheen’s former friends is finally revealed! Let’s dive right in and see why this comic mini-series is a must-read for fans of the mystery genre.

READ: With one series ending, it’s time to start a new one! Check out our review of BLACK ROAD #1

This issue picks up immediately where the last one left off, with Rosheen having just witnessed her former friend Dak burst into flames. Rosheen passes out from the explosion while a figure in a mask enters. This mask bears a striking resemblance to face of the Matchstick Man, an urban legend that inspired Rosheen and the Spark Club to set things on fire. It turns out that it is Pinker, Rosheen’s childhood friend who she believed died back in issue #2. Rosheen and Pinker discover that Dak was set on fire because of fracking gas. Then the two former friends go to the roof to watch the sunset as Pinker discloses the information Rosheen needed to exact vengeance for her friends’ murder. 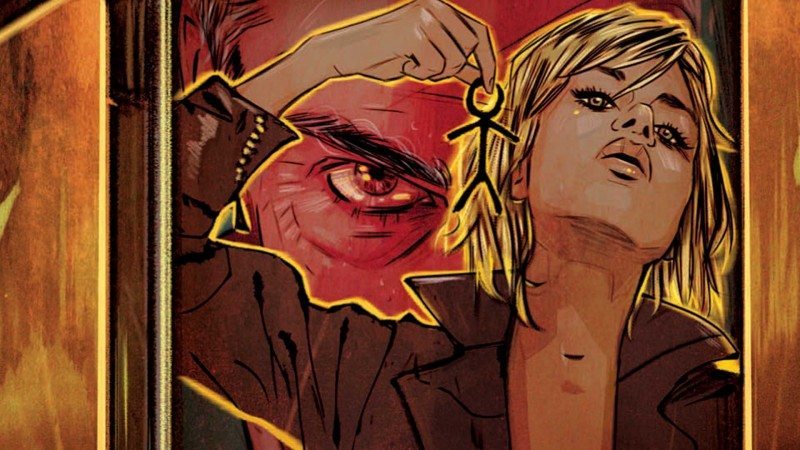 What makes this issue stand out from the previous ones is the way Spencer has multiple characters narrating the story at different points. As a result, the audience is able to hear the inner thoughts of characters that wouldn’t normally be written. Thus unspoken motives are revealed, and it soon becomes clear that everyone is hiding a secret. I commend Spencer for this method of story-telling, as it adds new and intriguing dimensions to the classic murder-mystery format, which helps the story avoid cheesy, whodunnit-style tropes. Throughout the issue, his characters reveal enough information to interest the reader, yet not so much that the suspense is spoiled or the ending easily guessed. I recommend readers check out the entire series more than once to appreciate all of the hints Spencer provides. These clues make the ending less surprising of course, but due to Spencer’s superbly subtle writing I was blind to many of them at first read.

The skillful pacing and plot direction Spencer demonstrates however, are not the only components to a good story. To truly entrance the audience, complex and original characters are required. Our protagonist, Rosheen, definitely possesses both these qualities. She reminds me of Dexter Morgan from the Showtime Series, in the sense that she recognizes her disorder and works to constructively excercise it. Dexter was addicted to killing, but decided to appease his obsession by only killing people he thought deserved to die. Rosheen is similar in the way she contends with her pyromania: by becoming a firefighter so she could be constantly be surrounded by flames without causing them. As for the detective, let’s just say we learn that there are unexpected layers to his character. Morrow’s portion of the issue was extremely engrossing due to its examination of his two-faced nature. The same can be said for Mayor Ed, whose real character is revealed in his narration towards the final portion of the issue. All of these duplicitous characters were able to trick not only each other, but the readers as well. 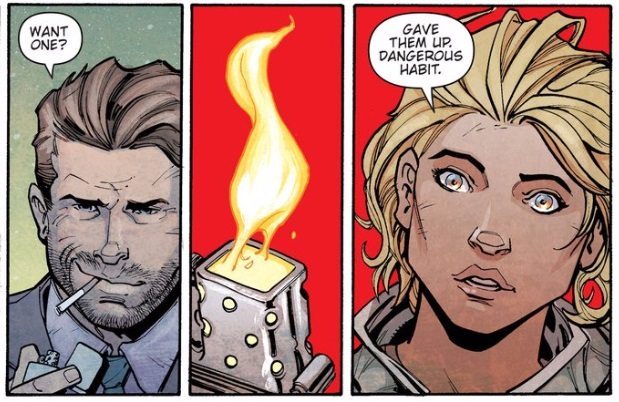 Artist Max Dunbar manages to visually amplify this story’s elements of suspicion and treachery by making characters genuinely appear as if they were feeling emotions that the reader knows to be contrived. At one point in the issue, Detective Morrow was pretending to be scared during an interrogation, and had I not been presented with his inner monologue I would have easily believed it. The skill with which Dunbar paints terrified panic into Morrow’s facial expression and body-language makes his charade seem so believable! As for the landscapes, Dunbar occasionally imbues them with an almost mystical appearance, especially during the scenes with the Matchstick Man. When this unnerving figure appears on the page, Dunbar uses a mixture of dark red and orange in the background to give the impression that the Matchstick Man in indeed, a creature from Hell.

I truly enjoyed reading this mini-series. It presents a highly creative, multi-faceted story with complex characters that had me second-guessing almost the entire time. Spencer’s clever exposition keeps you interested from start to finish, while Dunbar’s hauntingly beautiful artwork rewards every flip of the page. I definitely recommend checking out this series for anyone who seeks a fresh and innovative approach to comic mystery.