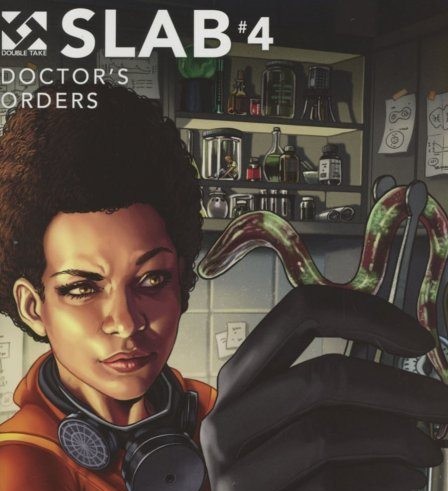 The ever-expanding Double Take Comics universe continues its growth in the fourth issue of SLAB. Writers Michael Coast and Brian Finkelstein (from a story by Coast and Bill Jemas) use the next chapter of the science-centric series to shed some more light on the “zombie” disease that’s running rampant through the publisher’s titles.

READ: Interested in Double Take’s GENESIS IV? Check out another of its titles: MEDIC.

After the usual Double Take recap page and an amusing “Double Take Manual of Style” page, SLAB #4 begins with a student protest outside Evans University Hospital. In name the collegiate activists are protesting the hospital’s government lab testing potential vaccines on animals. In practice, however, the group is more concerned with smoking pot and debating Kennedy Assassination conspiracy theories. Meanwhile, inside the facility Dr. Gaines is leading a news crew on a televised tour, breaking down the airborne way the virus travels.

Intervention from a surprising force that’s present in numerous other Double Take titles leads to chaos at the facility. The protestors are inspired by said force to storm the building and free the animals, in the process disrupting development of the vaccine. As if that wasn’t enough, a large group of dead puppies have been reanimated by the zombie microbes and begin roaming the halls.

SLAB #4 might be the most important Double Take book from their GENESIS IV release, at least from a standpoint of moving the overall universe forward. Without spoiling the issue’s central reveal (though I would strongly advise that any readers of this issue also check out the fourth issue of SPRING to make certain things clearer), it ties together several of the ongoing plot-points in the company’s line. This major advancement will be welcome to anyone who’s been keeping up with the overall narrative.

READ: After you read the issue to see how it fits in, check out our review of SPRING #4.

As is typical with most Double Take books, the biggest issue with SLAB #4 is in its characterization. Much like in MEDIC #4, many of the characters come off as one-dimensional with little differentiation between them. That said, I must credit the writers for the way they present the college protestors. Instead of coming off as stereotypical, the group is written relatively realistically and really stamp the book as happening in the 1960’s. They believe in their principles, while at the same time acting like actual college students.

Artistically the title is about average for the Double Take line. The pencils from Marcos Cosentino, over layouts from Stan Chou, are well-drawn if a bit bland as far as the characters go. The panel-layouts are a bit more adventurous and provide an interesting reading experience while at the same time never becoming confusing to follow.

SLAB #4 is a must-read for anyone who finds themselves interested in the Double Take Universe. The way the story ties together several of the company’s on-going plot threads is executed with aplomb, leading to an interesting and important read for those who’ve been reading since the start.