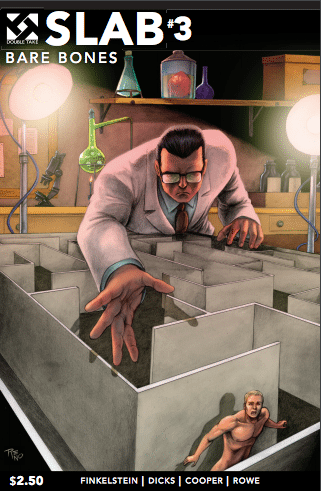 For anyone who keeps up with Double Take’s comics, there’s some variation in quality among their comics. There’s some really good stuff and some sluggishly boring content, and sometimes it’s hard to tell the difference. Thankfully, Double Take’s SLAB is one of the better books in the bunch. In Issue #3, the government is testing vaccines on dogs, and the world is watching. Many college students are outraged by this animal testing, and they go to protest. This is all being recalled by whoever is posing as Dr. Angela Kifo to her giant, cosmic desk-ridden boss.

READ: How do Double Take’s comics relate to one another? We’ll clear that up for you.

The highlight of this book? The humor, most definitely. If there’s one weak point in some of the Double Take titles, it’s that sometimes the humor is so dry that it isn’t communicated as well as it would be in audible conversation. With that in mind, some of SLAB’s humor is dry, but that isn’t all there is. The more overt moments of humor help the delivery of some of the other, drier material. With little jabs here and there at the protesting flower children generation, SLAB is definitely meant to be a parody book – and a clever one at that. 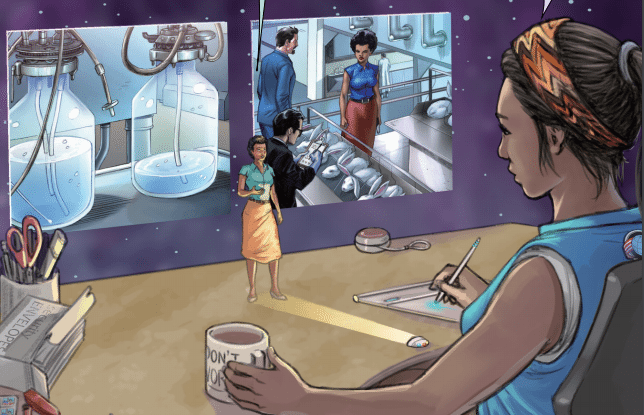 That’s not saying much for the characters, though. The tricky thing about a lot of Double Take’s books is that the characters, since they serve as commentaries and parodies much of the time, are not given the depth and individuality needed to make each book more compelling. As a result, the titles are amusing, but they do not amount to much in the end, and you forget about them shortly after. That holds true for SLAB. No character makes an impact in any memorable fashion, and even though SLAB is funny, you don’t feel very invested in any of the action. 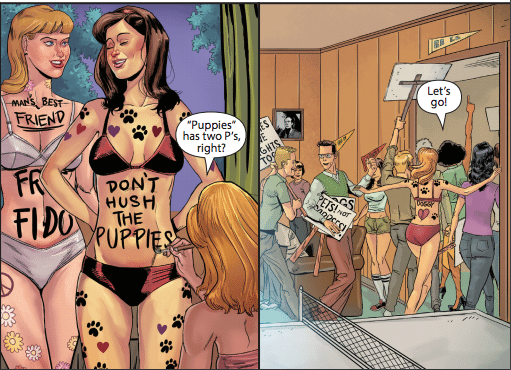 The art is pretty similar to some of the other titles at Double Take, as well. Not that it is particularly bad, but some diversity would be nice to distinguish one book from another. The trouble here is that it is clear that these books are all connected. To that end, having similar art is an interesting move, as it is a great way to world-build fast without wasting narrative space. The problem, though, is how you distinguish each book from the next. You are forced to ask the question, “Why does this story need to be told like this, too?” and unfortunately, it seems as though you need to read the other books to find that reason.

READ: Have you checked out Double Take’s Z-Men? See if it sounds like your kind of book here.

At the end of the day, SLAB is definitely one of Double Take’s funnier books, and it makes for a good read. Even if it does not scream “unique” next to the other Double Take titles, it is still worth the read, if for nothing else than some good, clever laughs.