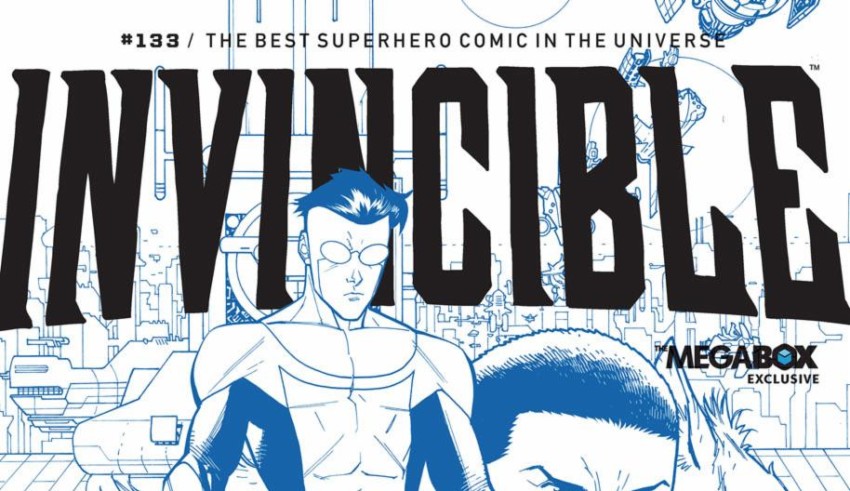 ComicsVerse takes a look inside Skybound’s The MegaBox: Heroes Edition! This MegaBox is filled with Epic Loot inspired by Skybound Comics’ newest and oldest heroes from INVINCIBLE to EXTREMITY. This box will please Skybound fans new and old alike with all of its awesome content. Now let us give you a rundown on what you can expect in this MegaBox!

This comfortable WALKING DEAD T-shirt displays a bearded Rick Grimes on a campaign poster, topped with the mantra “I Believe in Rick Grimes.”

The INVINCIBLE action figure, produced by Todd MacFarlane Toys, premiered at Emerald City Comic Con earlier this year. It is the first time that the long-running series has produced action figures based on any of their characters. Unlike the figures released at the show, this particular one captures Mark Grayson during his Black and Blue phase.

A metal pin depicting the most badass zombie killing swordswoman in all of THE WALKING DEAD.

Giving you the chance to play Season 3 of Telltale’s THE WALKING DEAD series, A NEW FRONTIER.

The last but some of the most stunning goodies from this Mega Box are the white variant covers for the most recent issues of INVINCIBLE, THE WALKING DEAD, OUTCAST, and EXTREMITY. These covers create some amazing contrasts, as their white backgrounds accentuate the vibrant, monochromatic images.

Pretty amazing, right? If you’re looking for more TWD merch to wear with pride or want to collect more cover variants for your favorite Skybound comics, why not get them all in one nice box of goodies? Order your very own MegaBox today!