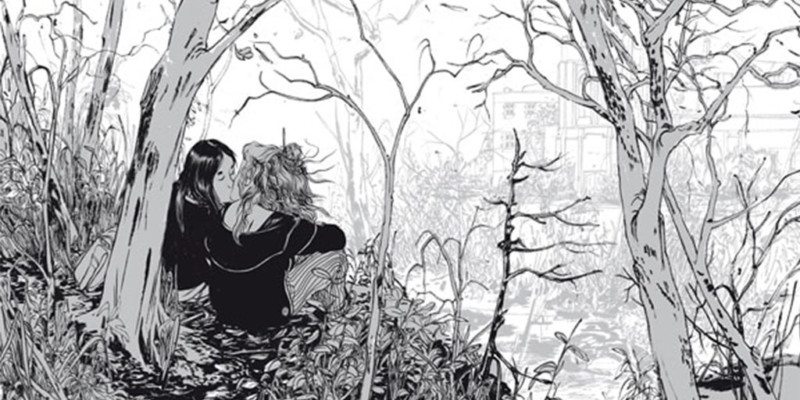 In early November, Melania Trump announced her cause as First Lady: an end to bullying. When I first heard about this, I laughed. It’s not that I think bullying is a particularly funny topic. In fact, as a fat bisexual butch woman, I know from personal experience that bullying is not funny at all. However, I have to wonder, how exactly does Melania Trump, whose husband harasses and publicly humiliates marginalized people for sport, plan to fight bullying? More to the point, what does she think bullying is? Where does she think it comes from?

We all agree that bullying can be deadly. In 2010, Rutgers freshman Tyler Clementi ended his life by jumping from the George Washington Bridge. Immediately following this, there was a great resurgence in awareness campaigns both on suicide and on bullying across American schools. Why the connection to bullying? Because Clementi’s roommate secretly filmed him kissing another man and posted it online. Because Clementi’s sexual orientation was a joke for his roommate’s friends to laugh at. Because, as a young LGBT person who’d JUST come out of the closet, Clementi needed support and community, and he received none of those things.

Anti-bullying campaigns surged after Tyler Clementi’s death because people made the connection that homophobia, like most forms of oppression, leads to bullying and, from there, can lead to death. Yet, most of these anti-bullying campaigns completely ignored the fact that Tyler Clementi was gay when talking to students. Instead of trying to reduce homophobia in each school district, they focused on teaching kids not to be a “bully bystander.” Essentially, they placed the responsibility for policing bullying on the shoulders of the students and also made the concept of bullying so vague that it became irrelevant.

Mariko and Jillian Tamaki’s graphic novel SKIM also begins with a suicide. At the Catholic School which protagonist Kim Keiko Cameron attends, the boyfriend of popular girl Katie Matthews overdoses on pills and passes away. In reaction, the entire school picks up suicide prevention as its Christian cause for the year, holding all sorts of assemblies and special clubs on the topic. 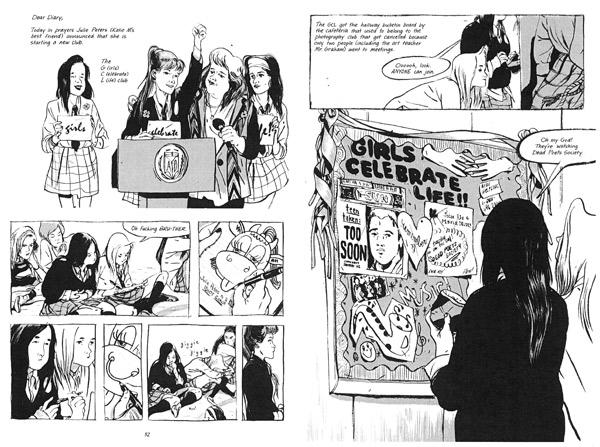 Yet, they refuse to mention that the boyfriend was rumored to have had a crush on one of the other boys on the volleyball team. In fact, any discussion of that is hushed up.

They completely ignore the connection between this young man’s death and the damaging effects of stigma. In fact, the school and its student body continues to police any students who fit outside the norm.

For instance, they actively disrespect and harass the protagonist Kim for being a fat Asian lesbian. The students keep calling her “Skim,” an unfortunate nickname based around her weight. The school guidance counselor labels her as “high risk” for suicide solely due to her appearance. This counselor then breaches confidentiality to tell the popular girls what Kim wrote during a self-care exercise. The popular girls, who normally never speak to Kim, make a huge deal out of how accepting they are of her, as if she’s a charity case. Kim refuses their help, and they spend the rest of the day spreading rumors about Kim being suicidal. Later, when the bulletin board about the popular girls’ suicide awareness club (“Girls Celebrate Life”) is vandalized, everyone at school assumes Kim did it. Students glare at her in history class.

WATCH: CV has a cool interview with Kim Jin-Hwang, director of THE BOYS WHO CRIED WOLF!

It’s also important to note that the vast majority of Kim’s school is white and thin. The only other Asian girl in the area, Hien, moved away years ago. That was because when Kim and Hien attended a birthday party in middle school, all the popular girls decided to kick them out halfway through. They shouted “AIR RAID” and forcibly dragged the girls out of the house. Kim says, “Hien’s parents adopted her from Vietnam two years earlier and she never got invited to parties. Maybe she thought that’s how people left parties in Canada. Asians first.”

These are the same girls running the Girls Celebrate Life club and pretending to care about Kim’s feelings now. 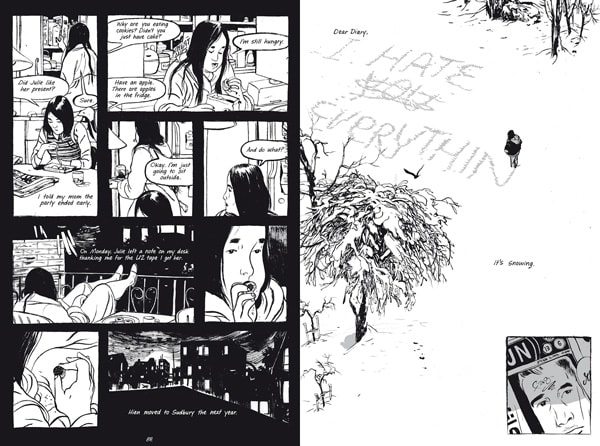 While the school is clutching onto the death of a gay man for their own gain, Kim is also struggling with her sexuality. She falls in love with a female English teacher who takes advantage of her, ignores her, and then moves away. Already feeling like an outcast, Kim falls into a deep depression over this.

She has absolutely no one to talk to about it. Her only friend, Lisa, is another straight white girl who is extremely self-absorbed and has claimed the role of goth outcast as a way to romanticize herself. Lisa expects Kim to silently listen to all of her problems but calls Kim a “psycho bitch” any time she voices an opinion or disagrees with her. When Kim does try to tell her about how the whole school thinks she vandalized the bulletin board, Lisa tries to twist the story so it sounds like everyone thinks she did it instead. 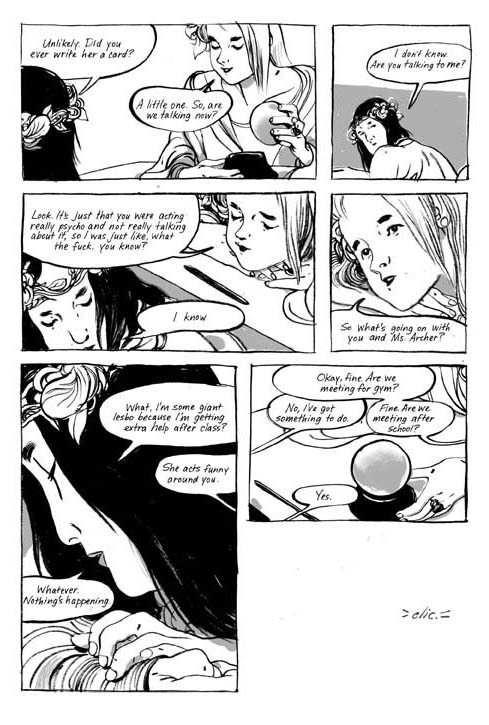 Needless to say, Kim cannot tell her why she’s depressed. Nor can she tell the very Christian guidance counselor or her mom who always tries to control what she eats. And she definitely cannot tell the Girls Celebrate Life club, which will not talk about gay people and hates Asians.

So Kim just keeps on holding everything inside of her, talking less and less and growing so depressed that she can hardly leave her bed some days.

READ: What are the psychological affects of fat-shaming?

It’s only when Kim finally starts talking to Katie, the girlfriend of the deceased star athlete, that things change for the better. Throughout SKIM, Kim notices how Katie is also depressed. The other popular girls follow her around constantly, but Katie stays silent and tries to walk as quickly to class as possible. One day, Katie arrives to school in casts because she “accidentally” fell off a roof. 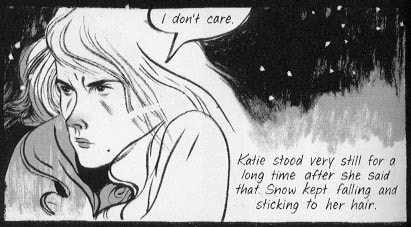 Ironically, despite making a huge show about suicide prevention, the popular girls and the school itself do nothing to help Katie cope with her own depression. In fact, despite the status difference, Katie is in an extremely similar boat to Kim. Like Kim, Katie has an emotionally abusive best friend (Julie, who runs Girls Celebrate Life and who had the racist birthday party) who tries to twist depression to make it about her. She forces Katie to attend events about her ex-boyfriend, continuously brings up the topic when Katie doesn’t want her to, and basically treats her as an extension of her ex.

Neither Julie, her club, nor the school in general will take any accountability for buying into the exact systems of oppression that drove Katie’s ex to suicide. Instead, they eagerly continue to manipulate and isolate Kim and Katie to near-death as well. The homophobic, racist, and misogynistic environment they all subscribe to is not simply cruel; it is deadly. This is why the school’s awareness programs fail to help any of the major characters. If you’re constantly bullying a woman who doesn’t fit Eurocentric ideals of womanhood while mourning a man who’d rather die than not fit Eurocentric ideals of manhood, you’re part of the problem.

Eventually, Kim and Katie do find each other. Seeing how Julie treats Katie, Kim notices how similar it is to the way Kim’s own best friend treats her. For the first time in the story, Kim finally expresses all her built-up anger. She tells off Julie and gets Katie away from her. Kim and Katie go to a coffee shop and vent about everything. Finally, Kim and Katie have someone who will actually listen to them. 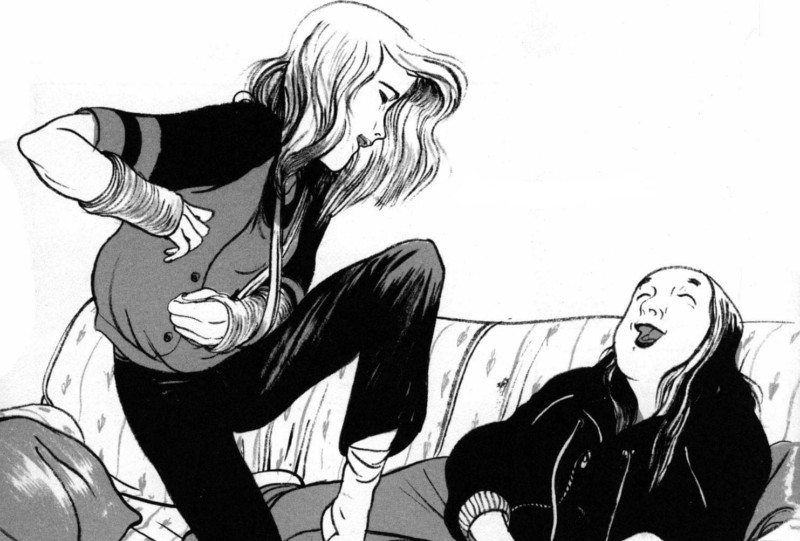 At the very end of SKIM, Katie waits for Kim in the woods behind the school to kiss her as an equal, right where Kim’s English teacher once kissed her as an authority figure. The damage isn’t fully repaired, but both girls can start the process of healing together.

SKIM tells us a lot about why conservative, mainstream anti-bullying and suicide awareness campaigns fail. They fail because they ignore gender, race, and sexuality, preferring to talk about everyone as though they’re a straight white thin man. Tyler Clementi didn’t need “bully bystanders;” he needed people to love him for being queer and to listen when he opened up. Kim of SKIM needed the exact same thing, as well as love for being Asian and fat.

This is why the campaigns after Tyler Clementi’s death didn’t stop bullying, and why Melania Trump’s new anti-bullying campaign won’t stop it either. With backing from a man who calls graphic descriptions of sexual assault “locker room banter,” this campaign will not help those who need it the most. In order to dismantle bullying and to help suicidal victims of bullying, you must dismantle the systems of oppression that cause the bullying in the first place. If you don’t do that, you’re just making empty promises.