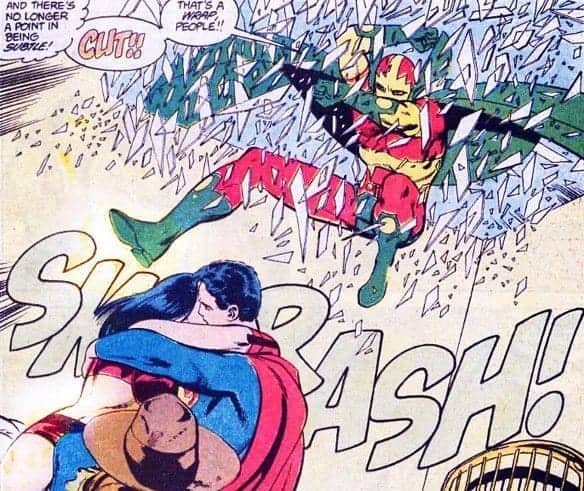 April Fools!  No, seriously, every one of these plots actually happened.  Marvel and DC really have had some absolute horror stories on occasion, and here we celebrate the worst of them!  Some are icky, some are funny, and some are just downright strange… 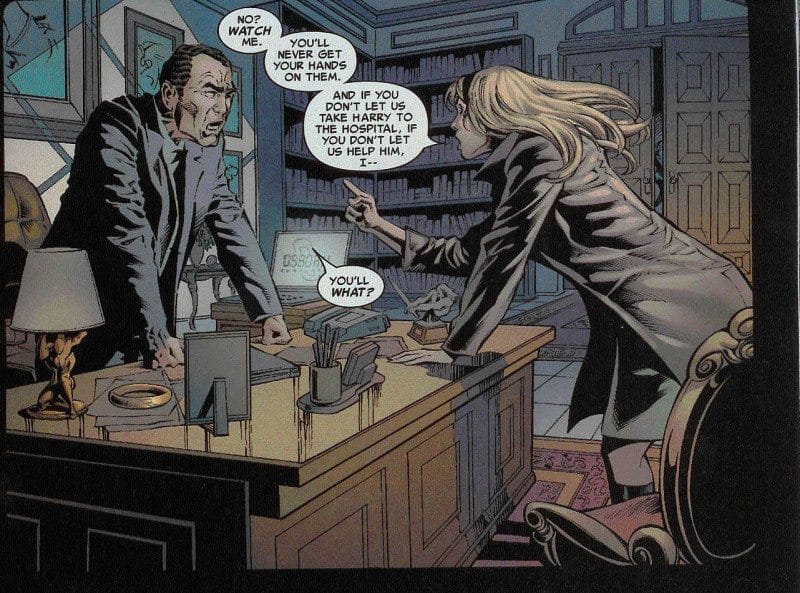 Spider-Man has had some really awful plots on occasion, and there are some that later writers have just… deliberately forgotten.  In this case, J. Michael Strczynski revealed that Norman Osborn – y’know, the Green Goblin – had a bit of alone time with Gwen Stacy, and the result was that Gwen was left pregnant with twins.

Apparently Gwen gave birth over in France, and planned to reveal her dark secret to Peter Parker; however, instead, she wound up dead.  Years later, the twins – who had aged unnaturally fast due to the Goblin Serum – came looking for revenge on Spider-Man (well, they had been brought up by Norman Osborn).

It’s generally viewed as one of the worst arcs in Spider-Man history, and I’d say it even beats the ‘Spider-Man is a clone’ plot of the ‘90s.  Which almost made this list in itself.  Now that Gwen Stacy’s back as Spider-Gwen, I think I can safely guarantee that Jason Latour is not going to give us some Gwen-Norman romance scenes. 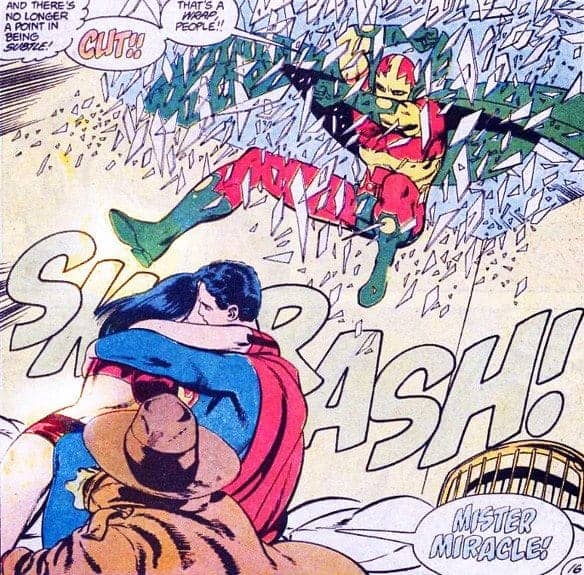 No, that’s not a joke.  ‘Action Comics #592-593’ featured an absolutely weird arc where Big Barda, wife of Mr. Miracle, became the captive of a weird villain named Sleez.  Under Sleez’s influence, Big Barda became a bit of a strip-dancer, and then Sleez got mind-control of another hero…

Yes, you can see where this is going.

Superman resists, Mr. Miracle battles a gang of crazed hobos who have a blowtorch (I kid you not), and Sleez is revealed to be something vaguely resembling a pink octopus. 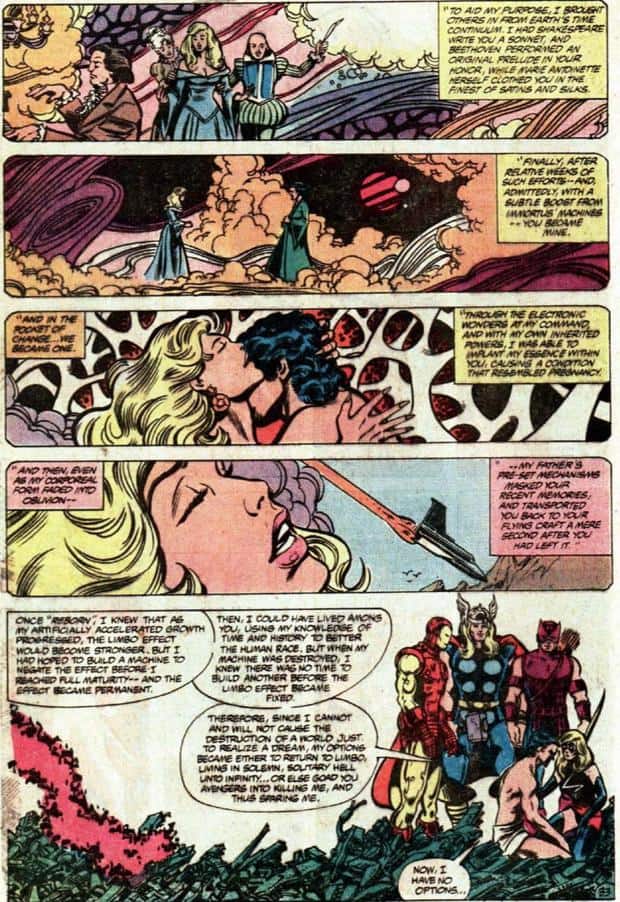 Only in comic books could this happen.  A cosmic being falls in love with a super-hero, uses his powers to enter into her womb, grows into adulthood at speed, and before you know it the two are off on cosmic hijinks as lovers!

Yeah, I’m willing to bet this is one arc that won’t hit the ‘Captain Marvel’ movie.

Chris Claremont ws not happy.  In fact, he passed judgment on the whole thing in ‘Avengers Annual #10’, an issue you might remember as being the issue to introduce Rogue.  There, Carol Danvers returns to Earth, and she’s pretty much furious with the Avengers – she compares the whole thing to rape, particularly given that it was heavily implied aforementioned cosmic being was influencing her. 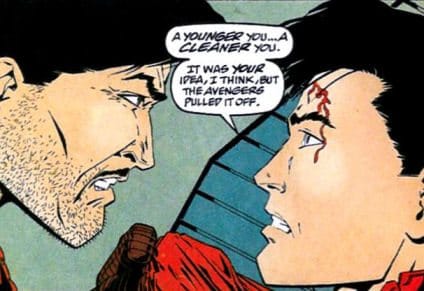 ‘The Crossing’ was not one of the best moments in Tony Stark’s life.  Revealed as a traitor for Kang the Conqueror, Tony betrayed the Avengers, and before matters were done the Avengers had allied with a teenaged Tony Stark who was trying to redeem his older self.

Needless to say, the idea was pretty much a bust, and teen Tony didn’t last long.  ‘Onslaught’ came and went, and the whole plot was pretty much nixed when the Avengers returned from Franklin’s World. 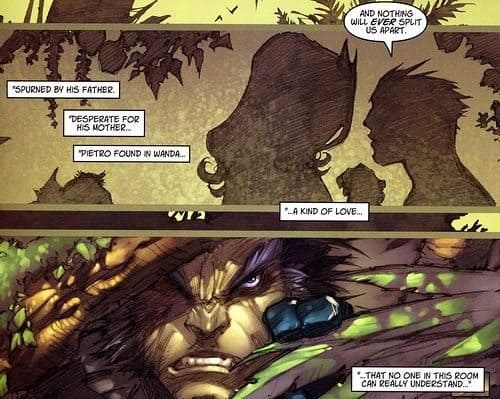 The twins have always been close, which irritated many fans when only Quicksilver made the cut in ‘X-Men: Days of Future Past’.  And then Jeph Loeb took charge of the Ultimate universe, and subtext become text.  In the very first issue he dropped dialogue about Quicksilver and the Scarlet Witch being in love.  By the time it was done, Wolverine was watching the two having sex from hidden behind the bushes.

Oh, and did I mention that, in the Ultimate universe, there’s a strong possibility that Wolverine is their father. 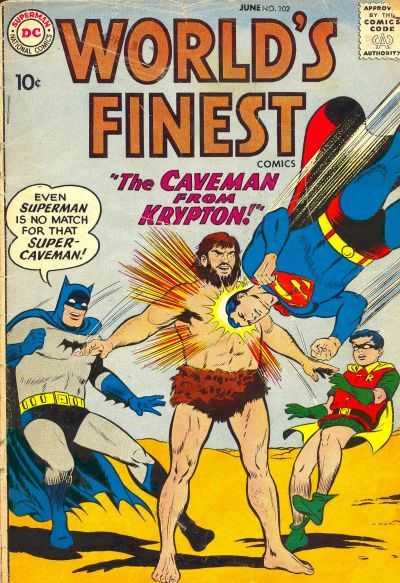 Let’s be honest, ‘World’s Finest’ could have filled this whole list, with utterly absurd moments that leave me breathless with laughter.  My personal favourite, though, is #102.

A meteor falls to Earth and, as luck would have it, said meteor is from Krypton – and bears an ancient Kryptonian caveman!  The poor guy gets really confused when two crooks decide this is the perfect time to start a crime wave while dressed as cavemen, and before you know it this guy’s living a life of crime.

So, what do you think?  Are there any other plots you think should be an April Fool’s joke?