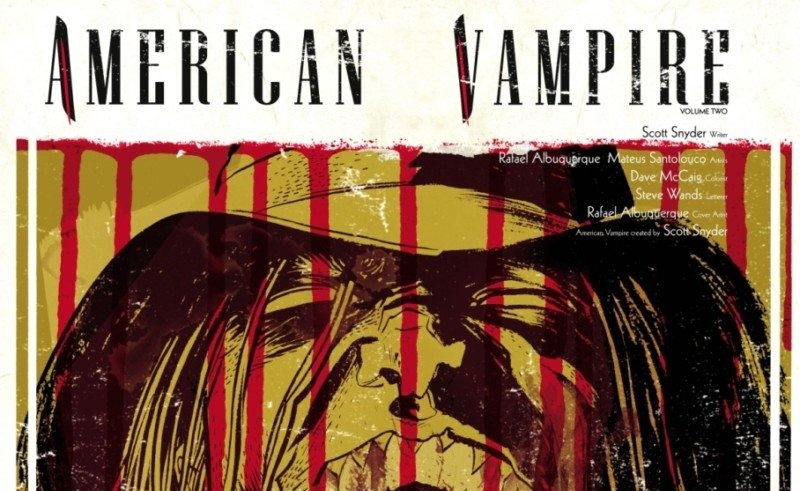 C’mon, you have to want to be a vampire by now. How awesome is this AMERICAN VAMPIRE series? I thought a never-aging vampire with diamond-like skin was cool, but these vampires are even better. The more this story develops, the more I want to define myself as an American vampire. Is that weird?

AMERICAN VAMPIRE VOL 2: DEVIL IN THE SAND did not disappoint. Normally, the sequel to a movie or book doesn’t live up to the beginning, but DEVIL IN THE SAND sure did. The vicious, messy kills show up even more in this second volume. 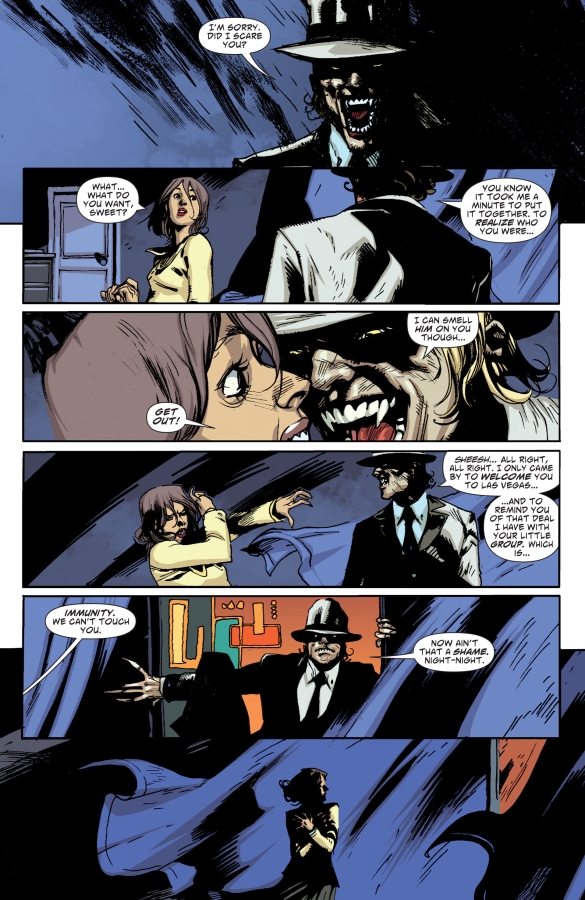 Someone or something is on a killing spree in Las Vegas, causing bloodless bodies of prominent businessmen to show up left and right, and the police chief, Cashel McCogan, is the man on the job. Scott Snyder does a great job at introducing characters to readers and really allowing us to get to know them. We learned about Pearl and got to know her in Volume 1, and now we’re starting to get to know Cash. Cash is a tough cop; he takes charge and likes things done his way.

Cash’s character adds to the reality of this story. The story is obviously all about vampires, so we’re able to step into that world, but these vampires are in “the real world.” Cash being a normal human being with an open mind allows us to see AMERICAN VAMPIRE as potentially real. At least I do. I constantly think, “What if these unsolved cold-case files were actually the responsibility of vampires?” You never know!

Throughout the book, we start to learn a little bit more about Cash. The realism continues when we learn he was an adopted boy just off a train, looking for a family. Although his father doesn’t die in normal, human ways, we can all find something to relate to Cash about.

READ: Take a look at our first AMERICAN VAMPIRE analysis to learn more about this series.

What would AMERICAN VAMPIRE be without Skinner Sweet? The best part about this villain is the fact that he can adapt to his surroundings. In the beginning he owned his candy-loving bad self, and in this book he poses as a pimp in Vegas. He pretty much owns a handful of girls and hides under a different name. Skinner Sweet is one of the most dynamic characters because he can live in any situation. I feel as if he could fool an entire country and be elected President. Ha — sounds familiar.

While the hunt is on in Vegas to find the vampire that is on a killing spree, two other vampire killers, Linden Hobbes and Abilena Book, take a ride to talk with Pearl Jones in Arrowhead, California. I was hoping Pearl would show up in this book at some point. It’s nice to see that she is still herself, living with her lover, a human man, and enjoying her quiet life. When she needs to fight, she steps in, but she has kept the peace for years. Pearl is a vampire that you’d want to be friends with, but wouldn’t want to piss off. 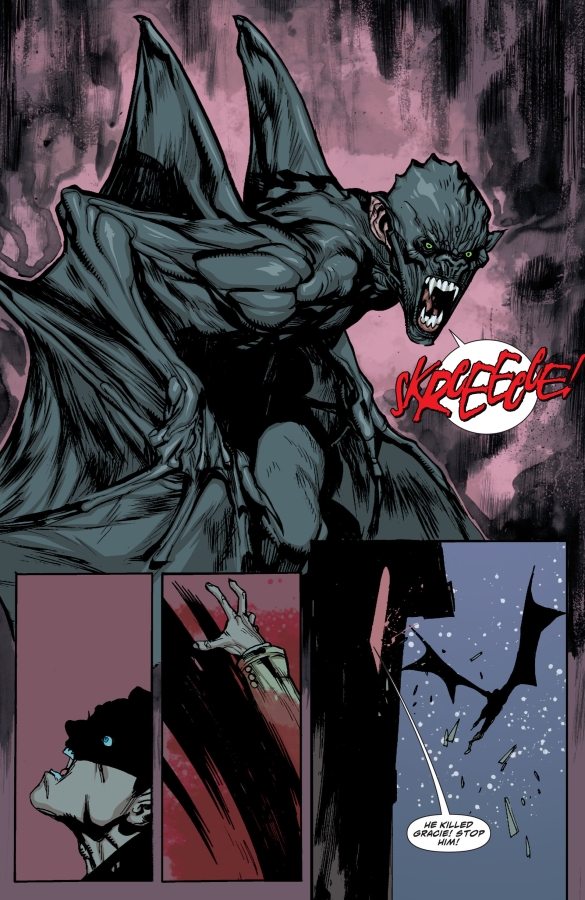 It’s always nice when a comic book series keeps the same characters around, but when you’re introduced to others, it’s even better. It was nice to get to know Cash, but meeting a new and scary villain is even more exciting. In my opinion, this vampire is the coolest looking vampire yet. I personally love Pearl, and if you read my analysis of Volume 1 you’d know why, and I’ll always have a love for Skinner Sweet; but this new, wicked species of vampire is simply amazing. He literally changes from a man into a giant bat-like monster with green glowing eyes and wings. Although its human form is an old man, the bat transformation is muscular and youthful in the creepiest way.

READ: Check out our review of VINCE CROSS: VAMPIRE HUNTER if you want to see some vamps slain!

Scott Snyder has a great way with words. I love his writing; it is both creative and meaningful. My favorite quote from Volume 2 is, “What happens to those childhood monsters when there are no more shadows to hide in? Do they leave? Do they move on? Or do they simply learn how to live in the light?” This could clearly just be about the actual monsters in the world, but I applied it to my personal life. We do all have monsters, burdens and memories we’re not fond of that we’re always trying to get rid of. Our “monsters” could be anything from guilt to a bad memory or action in your past life. For example, I was bullied in middle school. A girl once told me that I was too fat to wear a skirt. That monster of a comment has been with me ever since. Snyder could have been just talking about vampires, but because this specific part in the book stuck out so much for me, I was able to apply it to my personal life.

AMERICAN VAMPIRE VOL 2: DEVIL IN THE SAND is a great continuation from Volume 1. The storyline is thrilling and kept me on my toes from the beginning until the end. I cannot express enough how excited I am to read the rest of this story. I am dying to know what happens to these characters and I’m excited to meet others. I feel like I know these characters as if they are a part of my life. Bring on some more AMERICAN VAMPIRE!