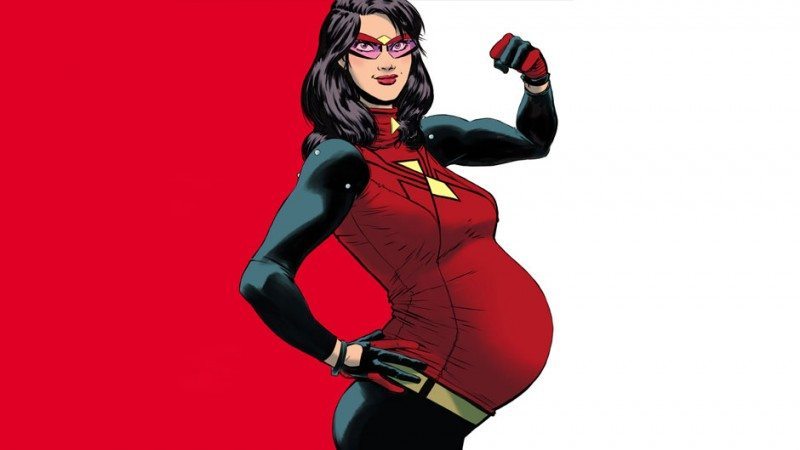 This is the second of a two-part series focused on the two most recent runs of SPIDER-WOMAN, preceding the upcoming SPIDER-WOMEN event. For the first part of the series, click here.

The new SPIDER-WOMAN runs have been intensely important to me on a personal level (to learn why, check out the first article in the series); however, their contribution to comics as a whole is also exceptional. One of the things that sets recent SPIDER-WOMAN comics apart, specifically from other Marvel comics, is that her series steers away from the sprawling space epics that have characterized Marvel’s arcs in recent years. Her departure from the Avengers has marked a return to more traditional, street-level crime fighting for Jessica Drew. However, the significance of this new, Dennis Hopeless-fronted SPIDER-WOMAN does not end there.

The revival of the SPIDER-WOMAN series kicked off with SPIDER-VERSE, a large Marvel event that featured nearly every Spider-themed character and every iteration of Spider-Man that Marvel had ever debuted. The SPIDER-WOMAN run started with a very controversial variant cover drawn by Milo Manara, an artist known for erotic drawings. Many fans thought the pose Manara chose for Spider-Woman was overly sexualized, as well as completely unrealistic in terms of position. In response to this, comic fans started The Hawkeye Initiative, a project where artists draw male superheroes in the same poses that superheroines are drawn in actual comics. If they look outlandish or overly sexual, the depiction is considered to be sexist.

Even before this controversy, series editor Nick Lowe had a costume redesign in the works. Artist Kris Anka created a new costume better suited to the street-level direction the book was taking. While her old costume was skin-tight lycra, Spider-Woman’s new costume is centered around a functional leather jacket.

Despite women making up a sizable chunk of the comics fandom (around 44% according to Graphic Policy), they are still objectified in the medium all too often. There is nothing inherently sexist about dressing a female hero in spandex. Tights are a wardrobe staple for superheroes of all genders; however, it is the way female heroes are portrayed while wearing them that is objectionable. Heroines in tights are often drawn with heaving breasts and over-pronounced butts, and are positioned in ways that direct the eye to these body parts.

The lines on Spider-Woman’s old costume led to particularly objectifying depictions. The yellow midriff and chest triangle became a cupping frame for Jessica’s breasts, with the contrasting colors making it look like Drew was wearing a particularly skimpy bikini, leaving her partially exposed. Anka said that when Lowe approached him regarding the Spider-Woman redesign, Lowe “grasped [him] by the shoulder, looked [him] dead in the eye and said that we must get rid of the arrow pointing to her crotch.” The redesign of Spider-Woman’s costume marks an effort on the part of Marvel to, at the very least, appease fans and improve the representation of women in their comics. Anka’s redesign sends the message that women should be admired in the context of their strength and accomplishments, not as objects of consumption.

WATCH: For more on feminism in comics, check out our video review of BITCH PLANET!

In the most recent arc of SPIDER-WOMAN, which debuted in Marvel’s All-New, All-Different relaunch, Jessica Drew is pregnant and eventually gives birth to a son. Initially, I was conflicted about this development. I was excited to see that Hopeless would be staying on as the book’s writer, but nervous about the idea of seeing Spider-Woman pregnant, hoping that she wouldn’t go the way of Jessica Jones; leaving behind heroics for her role as a wife and mother. Thankfully, as soon as the book began circulating, my fears were assuaged. 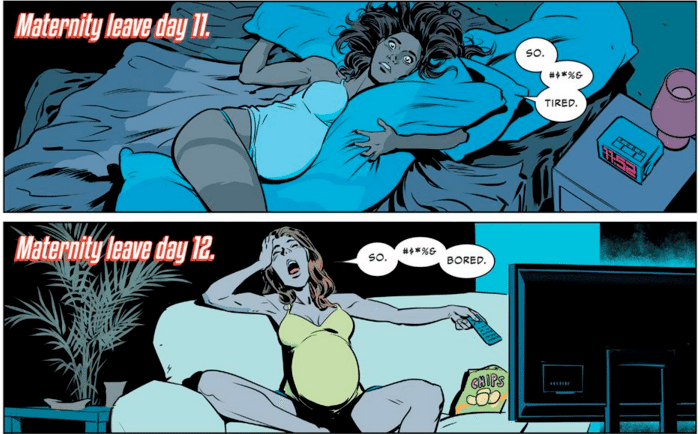 For a cape comic, the first arc of SPIDER-WOMAN post-SECRET WARS is very focused on the ebbs and flows of daily life for Jessica Drew. Aside from super-powered fight scenes and a hospital inside a black hole, the problems that Jessica encountered during her late pregnancy, delivery, and first taste of parenthood were no different than those faced by any other parent. Her child’s entry into the world didn’t immediately flip a switch that turned her into a perfect mother. Longtime readers should know that Spider-Woman isn’t the warmest heroine, and it’s nice to know that this stands true. The aspect of Jessica Drew’s motherhood that I found to be the most powerful is the fact that the child’s father is not in the picture. In fact, he isn’t even mentioned. Though she receives support from both Captain Marvel and Roger (the Porcupine), Jessica is a single parent who somehow juggles this with her work as a superhero.

This struck me as powerful because of the stigma that we as a society often place on single mothers. In our society, single parents are at the mercy of an unfortunate double standard. We shake our heads at single mothers – as if their situation is indicative of a lack of responsibility, rather than its presence. On the other hand, we laud single fathers as if parenting their child is something worthy of applause rather than a responsibility. Negative views about being a single mother stem from an idea hammered into us by society that if a mother is without a partner, there is something wrong with the single mother as a person. Jessica Drew subverts this. She is able to function as both a superheroine and a mother because of her strength as a person. She doesn’t need a partner, male or otherwise, in order succeed as a parent.

Despite the progress that has been made in recent years, the representation of women in comics is still lacking. As women gain more prominence in the world of superhero comics, they bring with them stories and experiences that cannot be told by male creators. The more noise that fans (that’s you!) make regarding the state of women, people of color, and other oppressed groups in comics, the more pressure large publishers will feel to hire them as creators. This will also force creators to treat women and other oppressed groups as people, instead of as tokenized members of their class, sexuality, race, or gender. So speak up!