I was already pleasantly surprised when Marvel, in October 2016, announced that an ongoing solo title for the character of Iceman would be featured within their “ResurrXion” line of new X-Men comics. Given the mutant’s 2015 coming out, this is a huge step forward in LGBT+ representation. And luckily, interviewing the book’s writer Sina Grace got me even more excited for the title. Grace gives great insight into his thoughts on the creative process, his main character’s queerness and what fans can expect from ICEMAN.

ComicsVerse: Your previous work contains a lot of self-contained graphic novels as well as indie work for Image. What has it been like to get into licensed projects for a “Big Two” publisher?

Sina Grace: I totally dig working for Marvel Comics. Image is great for giving me the freedom to get my hands dirty and try things out, and at Marvel I have the benefit of working with a smart, hands-on editor who has a million brilliant observations. For as much as I love doing things on my own, working with a team of thoughtful individuals for the same purpose — it’s cool. I’ve heard tell of some creators having a tough time with editorial, but I think it’s just making me a stronger storyteller, which at the end of the day is all that matters. No one’s telling me “do XYZ because we need to make toys,” y’know?

CV: You already had the opportunity of writing an X-Men story for the ALL-NEW X-MEN annual. What makes the mutant microcosm attractive to you as a writer?

SG: The X-titles were really the first comics I collected and read growing up, and I was always drawn to how Marvel approached heavy topics with these characters who always had to stand for doing the right thing. Plus, character drama has always been a staple of the X-Universe, and boy-howdy do I love intrapersonal conflict! And, the costumes. I love the costumes.

CV: What has been the biggest difference for you between writing time-displaced Bobby and writing “regular” Bobby? What sets them apart from another?

SG: Both characters are incredibly confident and use humor to their advantage but in different ways. Time-displaced Bobby — to me — doesn’t know better than to laugh some things away. Time-displaced Bobby seems to crack wise for himself, and “regular” Bobby cracks wise for the people around him. That slight variation with intent changes everything.

CV: Now a lot of fans, myself included, were pleasantly surprised when the first “ResurrXion” book Marvel announced was an ongoing Iceman solo title, especially after making Iceman gay. So my question would be: why Iceman? Why do you think now, in early 2017, is the perfect time for Iceman to get an ongoing?

SG: Personally, the timing seems right for an Iceman title now more than ever before because of the new direction all the titles will be taking. Our editors are encouraging us to forge new paths emphasizing optimism with these heroes, and there hadn’t been quite an opportunity to do so in the time leading up to INHUMANS VS X-MEN. From a current affairs standpoint, there’s a value to telling the story about someone who could hide behind empty one-liners but has to rise up and be a better version of himself. That wasn’t planned, ‘tho. 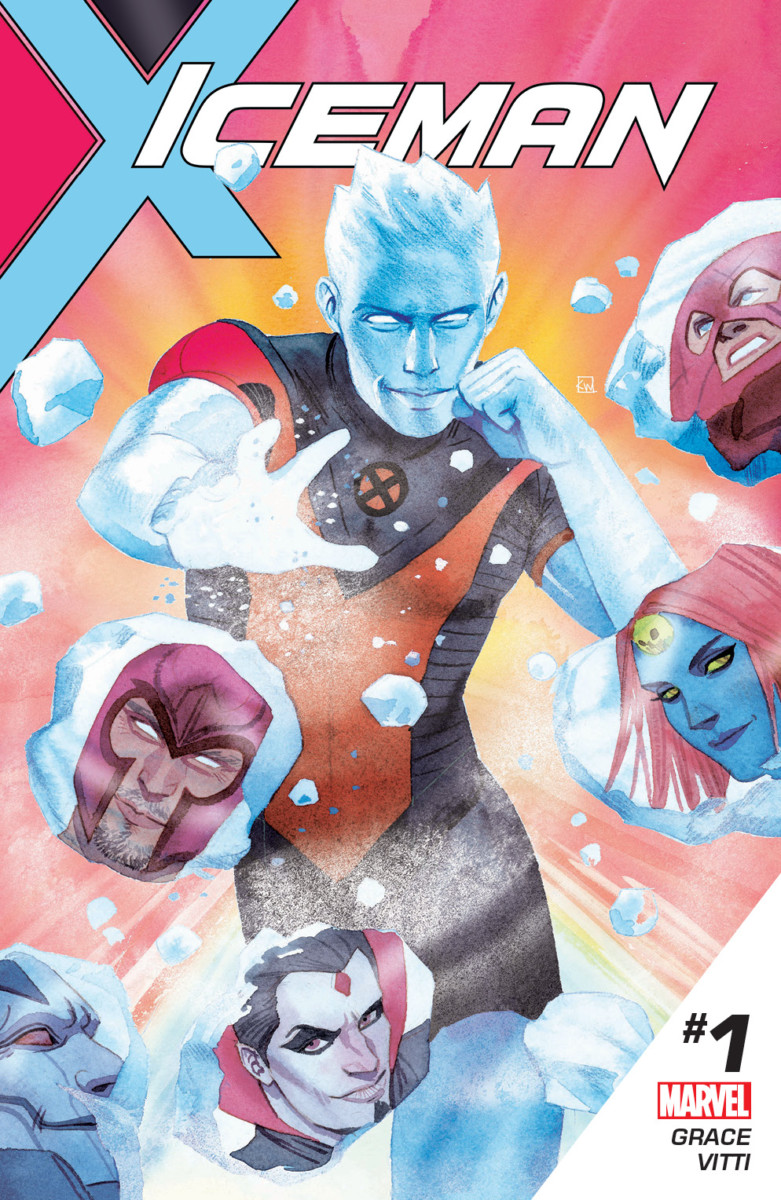 CV: What fans know thus far is that Iceman doesn’t seem to be on any of the main X-Men team books and that your book will send him on a journey to find and improve himself. Apart from that, what can you tell us about the premise of the title?

SG: It’s so hard to talk about the series without dropping spoilers! I’ll tell you what the series is not: there’s no odyssey or hero quest for him to embark on. This isn’t Marvel letting me do a self-indulged book with 20 pages of talking heads. This isn’t a lovely frivolous romp like UNBEATABLE SQUIRREL GIRL. It’s a series focused on Bobby figuring out how to live in his skin and the UNCANNY X-MEN-level shenanigans that come into play.

CV: Back when Brian Michael Bendis revealed Bobby’s true sexuality to readers, he experienced a lot of fan backlash and personal attacks, even. It just seems like a lot of people didn’t and don’t want to accept making the character of Iceman gay. Have you personally experienced that, at all, since it has been announced that you’re working on ICEMAN? If so, what’s your way of dealing with that?

SG: Twitter, lovely creature that it is, has exposed me to some of the negative feelings about what happened in Bendis’ run. That weighs on me, but I’m leaning into it. I’ve dated a few guys who didn’t come out until their late 20s and early 30s, and I completely understand the psychology behind the decisions they made. Rather than resist or try to massage the events of UXM 600, I’m looking at it as: everyone in that room — time-displaced Bobby, Jean, Bobby — made decisions… why. We’ll find out this Spring if fans vibe with my approach, but it’s felt organic and true to everything I’ve known about Bobby Drake.

CV: We know that X-MEN: BLUE will focus on the time-displaced version of the original five X-Men, but when it comes to their regular, grown-up counterparts, we haven’t seen much of them in the RESURREXION announcements. Can we hope for any of them to cameo in ICEMAN? Any other guest appearances planned for the book you could tease? Any prominent Marvel Universe love interests for Bobby?

SG: I’m making Juggernaut gay and shipping him and Bobby. JK x100!!!! We’ll be seeing some familiar faces as early as the second issue, but I’m starting off and keeping things small — Bobby stories first. I’d love to use Hank and Warren. And, for as much as this series serves to show a marquee X-Men hero in a different light, I have designs to do the same with a marquee villain.

As for the love interest… just you wait!

CV: One thing I always found astonishing about the character of Iceman, which is something Marjorie Liu tapped into, for instance, is the complexity of his relationship with his father. The way I read him, a lot of his problems with masculinity and with admitting his own queerness stem from the suppression of weakness and otherness by his dad in early childhood. This escalated to a scene in ASTONISHING X-MEN in which he almost kills his own father. What is your take on this? Will the title delve into this problem any further?

SG: In a word: yes. Marjorie’s take was really informative during the “research” phase of my writing. I think I’m allowed to say that Bobby’s relationship with his folks will be the first “love story” I tackle… You’ll see. To come back to my editor, Ketchum was like “draw from personal experience here.” At first, I was like “there’s no similarity between how my dad is to me and how Bobby’s dad is — OH…” #heartstrings

SG: Alessandro is such a talent when it comes to pushing limits of the imagination. We haven’t chatted too much one-on-one, but I’ve become such a fan of his art and professionalism over the past few months. Our editor, Daniel Ketchum, is so smart and has kept a keen eye to making this book a really great package. Kevin Wada’s doing covers, and we have way too much fun throwing ideas back and forth. In a larger sense, all of the other X-Writers have been so supportive and kind and collaborative with what they’re doing on their respective books. I feel so welcome. We follow Ketchum’s lead, and it’s just a great collection of people who all want to make books we’d buy as fans!

ICEMAN #1 will be released this spring, following the finale of INHUMANS VS. X-MEN. For further information about Sina Grace, check out his website or his Twitter page.