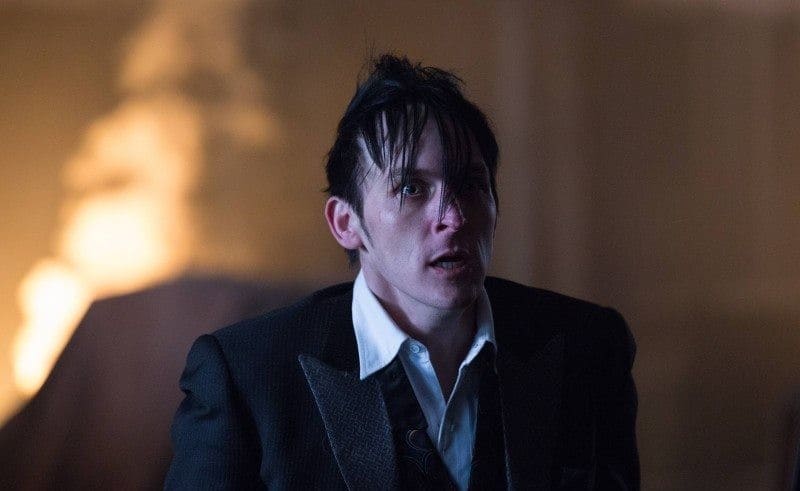 Here we are. After 21 episodes, some good and most bad, we finally come to the end of Gotham’s first season. We’ve seen men dressed up like goats and criminals tied to balloons. We’ve suffered through shallow characters and subplots bereft of a payoff. Yet, despite all of Gotham’s shortcomings there always remained a flicker of hope that the show would improve. That flicker is still there, and even manages to intensify during the action packed conclusion “All Happy Families are Alike”.

Fish Mooney returns to Gotham City under the cover of night. Rather serendipitously, she runs into Selina Kyle and recruits her to assist in the invasion of Gotham. Selina follows her, presumably to get in on those sweet 80’s style haircuts Fish’s gang gets to wear. Mooney’s mission to destroy Falcone is made simpler thanks to Penguin’s manipulations in the previous episode that led to yet another war between Falcone and Maroni. 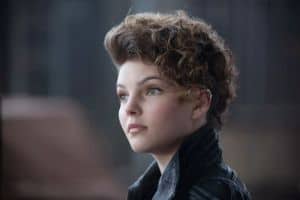 After a near miss encounter with a bazooka (really), Falcone is sent to the hospital. Unfortunately for the boss, both Penguin and Maroni aim to kill him there. Gordon and Bullock are able to rescue Falcone from the murder plot, only to moments later be captured by Mooney. It turns out Mooney’s plan for revolution involves presenting a gift to Maroni and suing for peace under his service. It would appear that Mooney is once again playing the long game, but those who know the details of Jada Pinkett’s contract know better.

Sue enough, the alliance is cut short when Maroni calls Mooney “Babes” one too many times and ends up with one of her bullets shot into his skull. Cue the firefight between the gangs, and now Gordon and Co have the needed distraction to escape. So after everything Fish Mooney suffered to get back to Gotham, her master scheme is done in by name calling. She’s been able to keep a cool head through prison and a gunshot wound (never addressed) but can’t stomach a few tame insults? Mooney’s string of failure is capped off when Penguin throws her off the room of a warehouse and into the Gotham River. An anticlimactic end to a walking anticlimax. 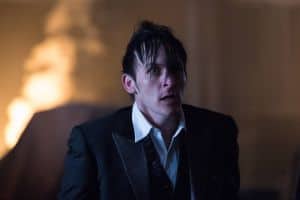 As if that ordeal wasn’t enough, Gordon races home just in time to see Leslie barely subduing a homicidal Barbara. Turns out The Ogre left a bigger impression on her than anticipated; unlocking a bloodlust in Barbara that simple therapy just won’t cure. Making Barbara into a villain is an intriguing shift to the character that succeeds in finally making her interesting. Thanks to this development, Gotham has a unique love triangle between a psychiatrist, a detective and a homicidal maniac. Next season has a stronger leg to stand on thanks to this twisted relationship.

Two extra scenes add a bit of panache to this finale. The first involves Nygma literally arguing with himself over his dangerous love of riddles. Split personalities are nothing new to superhero stories, but the scene gives Nygma an internal conflict that will be great to explore next season. His hatred of his own riddles and his awkward personality set up a great internal conflict for the future. It provides the character an opportunity to grow and evolve into the more refined and menacing Riddler we love to hate.

The other scene follows Bruce and Alfred attempting to locate a secret alluded to by Lucius Fox in the previous episode. After a few hours of tearing apart the library, Bruce is able to find a certain book that not-so-subtly hides a remote control with a single button. After a few moments of anti-tension where Alfred warns that it may be a bomb (a worry that even young Bruce finds silly) the button is pressed and the secret is revealed: a secret staircase to a cave. We’ll just have to wait until next season to figure out why a Billionaire surgeon needed a secret passageway.

And with that, this disappointing season comes to a close with a fair bit of promise. The lesser plotlines have been jettisoned (Fish Mooney especially) and the pieces are in place for something better next year. Gotham still has a faithful fanbase, but they’ll need to step up their game if they want to hold onto it.

Keep a look out next week for my look back at all of Season One.  Where did this season go right and where did it go wrong?

Click here for more about Batman!
Missed something? Our reviews of the early episodes can be found here!
For more from Max, click here!