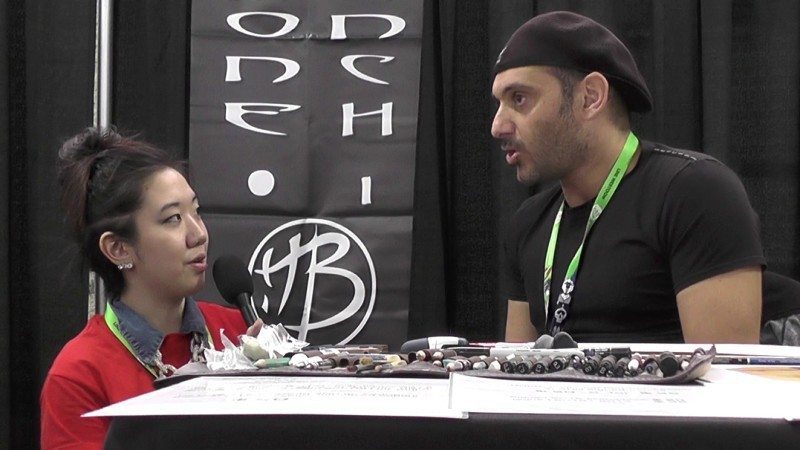 In the world of vast talent containing Marvel and DC creators, Simone Bianchi finds a way to break away from the pack. He enjoys a well-rounded career and name. Bianchi developed his impressive career from starting early in his home country of Italy. He first created music videos, animation, and CD covers. Now, he has also drawn for various covers such as X-MEN UNLIMITED and ASTONISHING X-MEN and worked on interior art for GREEN LANTERN, WOLVERINE, and ORIGINAL SIN.

HEAR: Want more Mr.Bianchi? Did you know he did the art on the BLACK PANTHER motion comic? Check out our podcast on it!

Like most prolific artists, I found him working away at his booth. This made it seem likely I may not get a chance to talk to him. However, he was nice enough to lend me ten minutes of his time. We talked about what inspires him creatively and how he stays productive in so many different kinds of media. He talks about how much he enjoyed drawing over classic superheroes growing up like Spider-Man, Daredevil, and Batman due to a lack of exposure for Marvel characters. Simone Bianchi mentions these heroes weren’t readily available in Italy at the time as they were in the U.S.A. His enthusiasm and continued work in comics just go to show that these heroes we all know and love have survived in American pop culture as well as internationally.

LISTEN: ASTONISHING X-MEN fan? We discuss that comic and more in this podcast!

Simone Bianchi’s Work in Other Mediums

Simone Bianchi is a God among men because he’s one of several creators not satiated by one creative medium. Rather, he thrives in many. Having enjoyed and respected music from a young age, Simone Bianchi talks about how much his Italy-based record studio means to him. He loves finding talented new musical artists to support. I, myself, have always strongly considered producing animation for music videos like Simone Bianchi. He had the chance to direct a video for Direct to Brain, an important 3-D production studio in Europe.

In conclusion, Simone Bianchi is enthusiastic and passionate about the relationship between music and visual art. He strongly believes the artwork he produces for the comic book world. After all, it has a certain music and rhythmic quality to it. If you haven’t already, you’ll have to see for yourself!