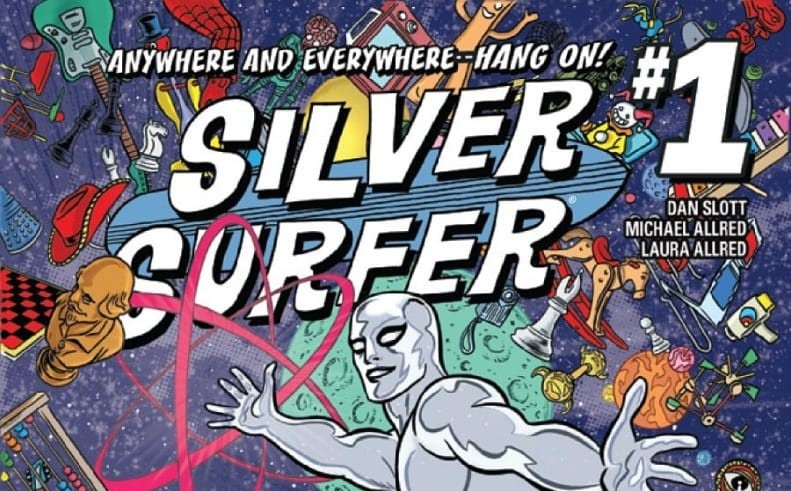 In a myriad of ALL NEW ALL DIFFERENT MARVEL number 1’s continuously hitting the shelves, it can be difficult to separate the wheat from the chaff. Praise be for SILVER SURFER #1, which not only stood out on the shelves (thanks in part to Michael and Laura Allred’s glorious cover) but also told a whimsical, crazy, thoroughly enjoyable story full of wonder, aliens, and heart.

Maybe I could end my review there, but perhaps I should elaborate. The first volume of SILVER SURFER by Slott and the Allred was a triumph of art and storylines. The stories were larger than life, set in a crazy kaleidoscope galaxy of color and silver surfboards. The introduction of Dawn Greenwood to the Marvel Universe was a breath of fresh air followed by a splash of red and black polka dots. The first volume ended with the beginning of SECRET WARS. Thankfully, that story saw our characters survive the destruction of the MU. In a lot of ways it was a perfect volume, and how could you really improve on perfection?

READ: We look at, and recommend, Volume 1 of SILVER SURFER!

They bring it to the next level, a level I didn’t even know existed! The cover should have been the first indication, an invitation, presented open-armed by the Surfer himself, to a world of imagination and memory. It opens on a quite night in Anchor Bay, Massachusetts. Dawn’s father sees a shooting star in the dazzling night sky and hopes it’s Dawn, returning from the stars. He wanders inside and turns on the TV, on the off chance that there could be some news of her. A tad of a stretch don’t you think? As it turns out, not so much, as an alien race known as the Hordax sends a live television feed across the world, demanding Earth’s immediate surrender. This is when the Surfer and Dawn come crashing into the tale…. 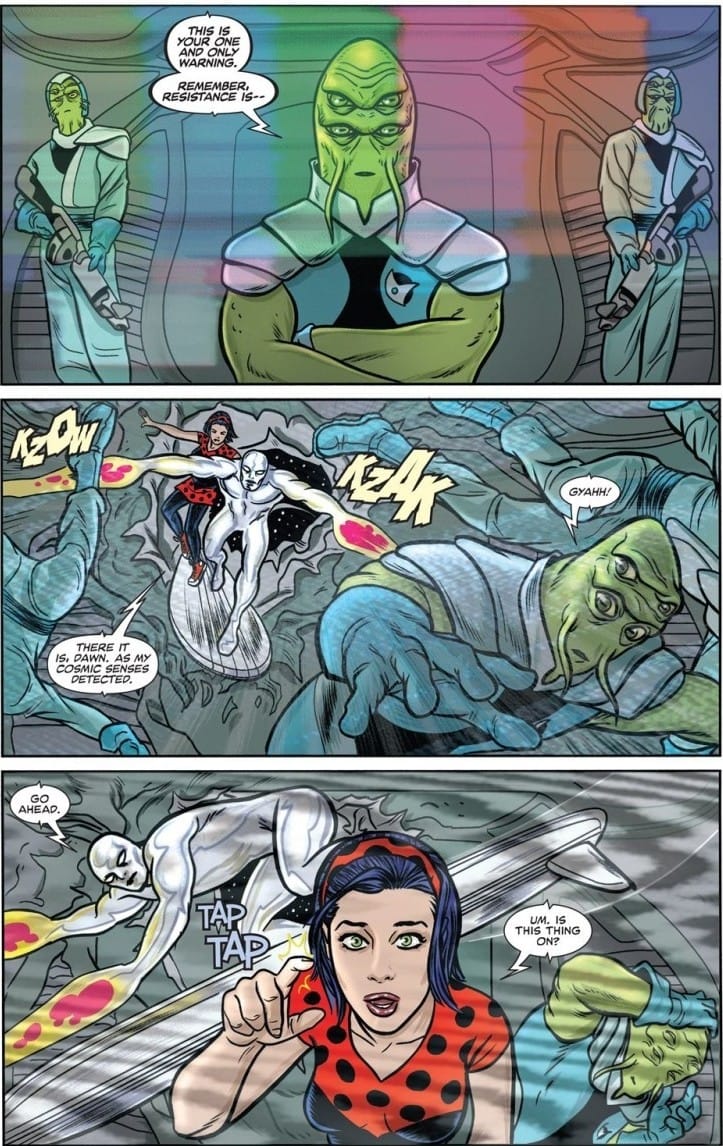 In these few pages, with the alien threat and the comical way in which our heroes enter, I was half expecting it to cut to the Doctor Who intro theme tune. Dan Slott clearly loves the Timelord and his adventures (as do I), and this felt like a gentle homage to the rebel Gallifreyan without being just a carbon copy. Once the intro’s out of the way, the cosmic travelers finally arrive back on Earth to spend some time with Dawn’s family. Because Dawn has missed so much, her family put together a Hallow-Givings-Birth-Mas party for her. The script is full of sweet moments, and Dawn teaches the Surfer a valuable lesson: just because you’ve seen something, doesn’t mean you’ve experienced it.

Then the Hordax come back for vengeance.

Michael Allred fires on all cosmic cylinders, stepping up to Slott’s whimsical script and hitting it straight to the moon. His comic pacing is absolutely spot on, while his characters move with energy and purpose. The reveal of what the Hordax wants is pure genius (and echoes in part an idea from ART OPS, a Vertigo series co-created by Allred) and is full of fun cultural references. Dawn’s way of resolving this is equally good, and really does reflect how much art and stories can help shape a world. Laura Allred injects her husbands inks with eye-popping color, at once thick and full, yet sparkling with life. As good as he is, it’s Laura’s work that seals the deal on this comic.

It really feels like the creative team on this book are just let off the leash to let their creativity flow. This issue is clever, fun, and will give any reader a smile that will stay with them for a while. You couldn’t want more than that, could you?

READ: Check out our review of AMAZING SPIDER-MAN #6 written by Dan Slott!