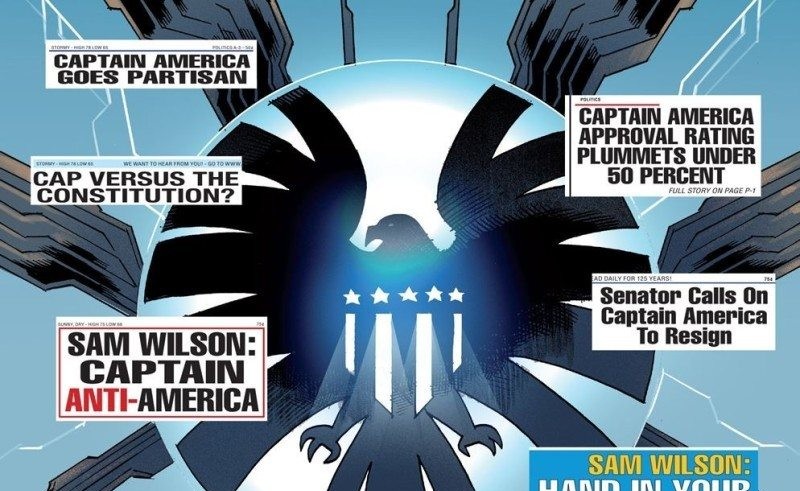 From SAM WILSON: CAPTAIN AMERICA to Japanese art that caused hassle for Facebook, the past fortnight has seen comic book plots and art become very, very political.  But is there a place for politics in comics?

The first issue of SAM WILSON: CAPTAIN AMERICA released last Wednesday, and it stirred the pot in a big way.  The book is blatantly political, with the All-New All-Different Captain America facing off against a Far-Right group known as the ‘Sons of the Serpent’.  They’re opposed to immigration, and cheering in anticipation of what they refer to as the ‘Great Wall’.  In other words, the Sons of the Serpent are clearly Donald Trump supporters, and the dark-skinned Captain America stands for diversity confronting them.

Notice also that the villains are known as the ‘Sons of the Serpent’.  In Judeo-Christian cultures, the Serpent is often symbolic of the Devil (as per the Genesis narrative in the Bible).  By making this latest incarnation of the Sons of the Serpent supporters of Trump, writer Nick Spencer is sending a none-too-subtle message about his opinion on Trump’s politics.

READ: Check out our review of SAM WILSON: CAPTAIN AMERICA #1!

Needless to say, Fox News were not amused:

The debate rumbles on, and probably the best response was from Salon.com:

It’s… more than a little weird to see all these outlets describe the bad guys in this comic as mere conservatives. If you find yourself relating to a group of murderers who threaten anyone who crosses the border with death, you’ve crossed the line from “conservative” into something far more frightening.

Meanwhile, over in Japan, artist Toshiko Hasumi posted this image on Facebook: 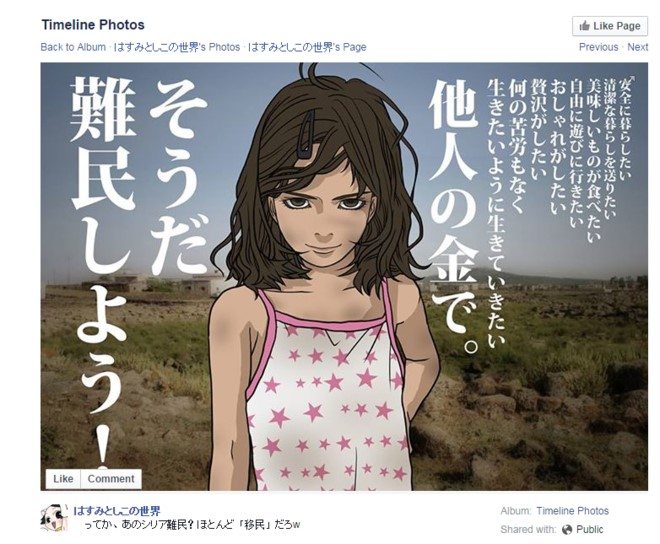 I want to live a safe and clean life, eat gourmet food, go out, wear pretty things, and live a luxurious life… all at the expense of someone else.  I have an idea.  I’ll become a refugee.

A Change.org petition accrued more than 10,000 signatures requesting that Facebook take the image down, but in the end the artist did it herself.

Two examples, one of Left-Wing politics in comics, the other of Right-Wing art.  Is it wise for comics to stray into the field of politics?

THE TRADITION OF COMICS AND POLITICS 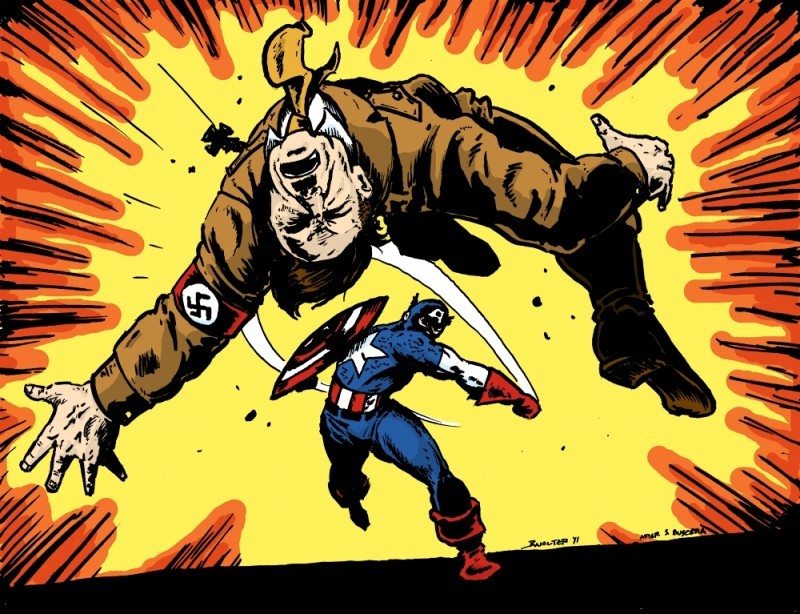 Ironically, as anybody who reads a newspaper can tell you, one of the progenitors of modern-day comic books was in political images.  Martin Luther, a key figure in the Protestant Reformation, used the juxtaposition of wood-cut images to present complex messages; contrast Jesus driving the money-changers out of the Jewish Temple to the Pope writing indulgences while the poor pay money in the belief that he will grant them forgiveness for their sins in return. 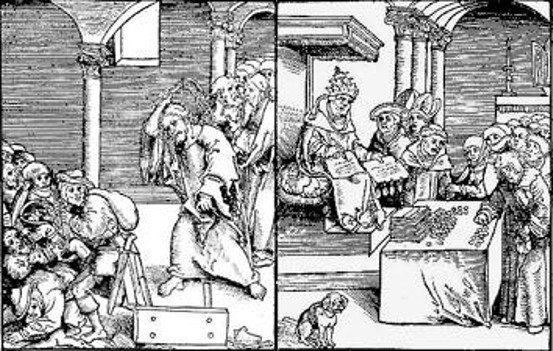 Notice the pattern.  The political cartoon uses well-known images or contexts in order to tell a quite sophisticated narrative.  Here, the Pope is clearly paralleled with the money-changers, with the implication being that Jesus would treat the Pope in the same way.  It’s a complex message, one that can be easily understood by Luther’s audience because of their familiarity both with the New Testament and with the Papal Indulgences.

As comics proper developed, they remained strongly political.  The Second World War saw superheroes headed out to the Front in order to sock Hitler on the jaw!  The popular radio shows portrayed Superman as standing for “Truth, justice and the American Way.”  Thus certain superheroes actually started out tied to national, political ideas.

READ: Why does SUPERMAN endure?  You might be surprised at just how political the character is…

In 2013, Todd McFarlane argued: “There hasn’t really been historically a comic book that has worked that is trying to get across a message” (ThinkProgress.org).  At the time, he was speaking purely about the push to include more diverse characters in comics, but such a blanket statement deserves to be challenged: Art Spiegelman’s 1980-1991 MAUS run confronted the horrors of the Second World War and the Holocaust, becoming the first graphic novel to win a Pulitzer Prize. 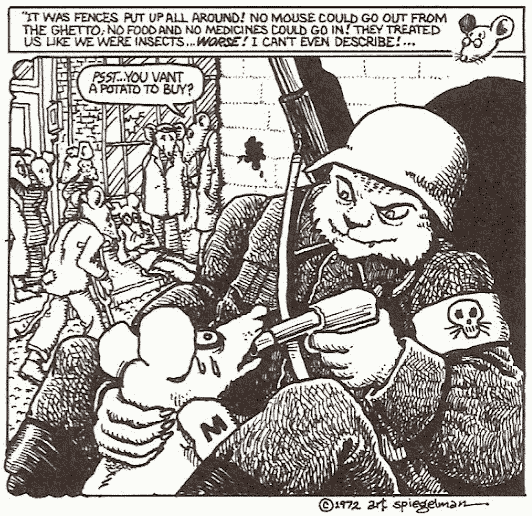 Political statements have always been a part of comic books.  Take the X-Men; they became tied in the public (and editorial) consciousness to the civil rights struggle, paralleled both with the battle against racism and, into the 1990s, with the quest for homosexual rights.  In the “X-Cutioner’s Song” arc, Charles Xavier explicitly spoke about his ‘dream’, drawing the parallel quite deliberately.  Although challenged in the letters pages, Marvel refused to back down.

Even the movies have embraced politics.  There’s an amusing scene paralleling mutant rights with gay rights in X2, while CAPTAIN AMERICA: WINTER SOLDIER is clearly partly-inspired by Snowden’s revelations on NSA activities.

What’s more, superhero fans may be surprised to hear that there are actually journalists who write and draw comics.  Take the example of Joe Sacco, who used comics to draw readers into the world of Palestine, and to portray the horrors of the Bosnian War.  Or cast your eyes to the work of Rutu Modan, co-founder of the Israeli comics group Actus Tragicus; her EXIT WOUNDS, an exploration of life in Tel Aviv, won the 2008 Eisner Award for Best New Graphic Novel.  Don’t miss Modan’s WAR RABBIT, a brief comic discussing the Gaza War, available free online.

SO COMICS ARE POLITICAL – BUT IS THIS IS A GOOD THING?

Some might argue that comics should not be so political.  After all, runs the argument, they’re just escapism, right?  Although many academics typically scorn escapist fiction, by its very nature escapism is a transformative experience.  When you immerse yourself in another world, you live vicariously through the experiences of the characters you are reading.  You gain insight into the thought-life and experience of a person completely unlike yourself, whose experience and values may be completely different to anything you might otherwise engage with.  As Lloyd Alexander, a popular fantasy writer, observes: “Fantasy is hardly an escape from reality.  It is a way to understand it.”

Duncan Smith puts it even stronger:

We frequently hear fiction reading described by both readers and fiction’s detractors as an escape… However, we need to be clear about what readers are escaping from.  They are escaping from a narrow, limiting view of the world and journeying to a place where it is possible to experience a deeper connection to our real selves and live fully in our world.

Thus to Smith, escapism is a chance to broaden your intellectual and emotional experience of the world, to come to understand those whose perspectives are unlike you – and then to bring that broadened understanding back into the real world with you when you close the book or comic.  In other words, there is a social value on escapism.

If escapism has a social value, then we should not condemn it, but rather celebrate it; and we should expect comic book writers and artists to be creating fully immersive worlds, ones that can have a transformative effect upon their readers.

Be sure to let me know what you think in the comments below, or on Twitter @Comicsverse!