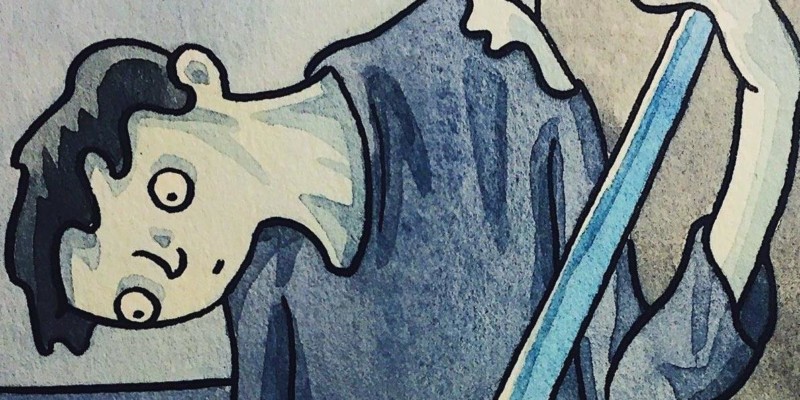 I wasn’t sure Shitty Watercolour, aka Hector Janse van Rensburg, would talk to me. His work has appeared on CNN, MTV, BuzzFeed, Barack Obama’s personal Tumblr, and many other high-profile websites. His fame made me believe he may be too big and busy, especially for a university student.

So when he agreed to an interview, I was ecstatic. Shitty Watercolour posts paintings that really stick to those with inner turmoil, myself among them. His work makes me chuckle and produce that “relatable” meme glow in my decaying if not already dead and shriveled soul. His commentary and answers further confirmed this. It was truly a pleasure discussing his art.

ComicsVerse (CV): You started some years ago posting your paintings on Reddit. When did you notice you gained a following? How did that change your perception of what you were doing?

Shitty Watercolour (SW): I was discovered by Reddit users through the sheer volume of paintings that I was posting, not through the quality. I think there was a point where people just started to wonder ‘who is this person devoting all their time to filling the internet with terrible artwork?’ As more people realized that, my paintings would get more upvotes, and it grew from there.

At first, it didn’t change anything at all except the level of excitement that I had when painting; knowing that there were more people invested in what I was doing added some steam to my engine but didn’t change the direction of the train. Eventually, this energy turned inwards and I began to reflect on what I was doing and where I was going. That introspection made me very unsure of myself and it still exists years later.

CV: What was your original goal in starting this compared to what you’re doing now? What are your plans for Shitty Watercolour?

SW: In the last few months, the goals of Shitty Watercolour have come full circle. I first started painting because I had just been rejected from my first choice university. I didn’t have many friends, and I wasn’t very close to anyone. Painting was a distraction.

Right now, I am about to leave university one way or another. I don’t have many friends, and I am not very close to anyone. Painting is a distraction. I have never understood people who say that they aren’t interested in a life where they don’t create things, and I still don’t understand them, yet I agree. All I can see wanting is a room with food and paper to paint on.

READ: A SH*T TOWN, A FUN HOME: Why These Masterpieces Are Crucial

CV: In your eyes, how have you evolved? What developments are you most proud of in your evolution?

SW: The most significant evolution in the last year or so (I’m terrible with time, I’m not sure) is that I’ve started drawing my own ideas. I used to draw Reddit comments, then sloth versions of things, then tweets, but right now is the only time I’ve been consistently working on things of my own. Honestly, I haven’t a clue about technical proficiency: people said they liked my work when it was very bad and they say they like it now, which has just left me very confused about everything.

Together with that, I’m happy with my relationship with honesty. To ‘be true in your art’ used to be such a cliche phrase for me, but I have slowly come to understand that everything else really is just pointless both for yourself and the viewer.

Painting things you don’t know or understand is just a regurgitation of other peoples’ ideas. Which is why I don’t paint happy things. More pragmatically, your work will miss out on an authentic development over time. It won’t tell a story, even if you don’t know where that story is going.

READ: Cooing Over Pigeons, Webcomics, and Mental Illness with Chuckdrawsthings!

CV: Where does your inspiration come from?

SW: I sit at my desk and stare out the window for hours each day, looking at the telegraph pole. My poor memory allows for me to count the number of wires coming from it without remembering. After that, I count the chimneys, and look at their shapes, and how the light hits them, and think about how I’m too bad at watercolor to capture that. Repeat a few times, and if a relatable thought about the futility of existence hasn’t come along by then I give up for the day. 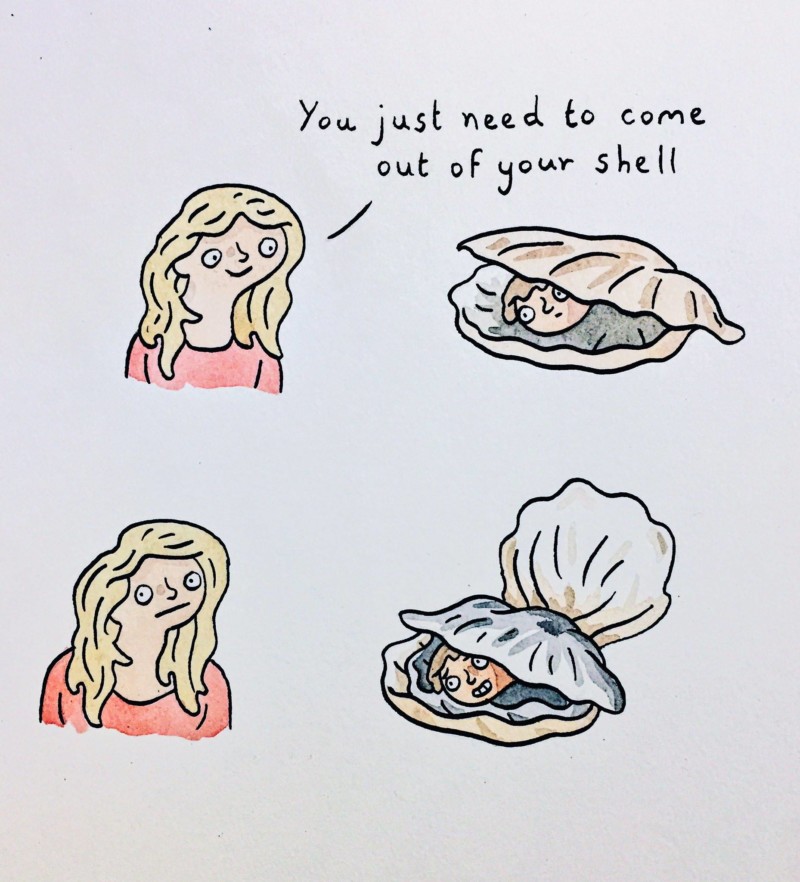 CV: You create cartoons, meme-like images, sequential images which are mini-comics, and now you’ve done some motion images. Do you like reinventing yourself a bit? Which style do you enjoy doing the most?

SW: I feel limited by so many things: my cartoony style, their lifelessness compared to talking and moving videos, and my creativity, to name a few examples. Video was a nice experiment, but there are some things that I want to put in comics that I would not speak aloud.

It’s already a balance of what I should and should not say, and committing my own voice to them is too much. Comics allow for some dimension of time, but I usually lose patience after the second panel; my paintings tend not to take more than an hour to complete. The broader picture is that I have no idea what I’m doing, or what I would like to do, in any sense or medium.

The Influence of Comics

CV: Have comics had any influence on your work?

SW: Yes. I consider myself a very logical person, and I had never really ventured into the world of art or illustration before I started maturing into my role as a shitty watercolour artist (small break here for the internal bewilderment upon the realization that that is a sentence that applies to my life).

What I hate about comics is that I can’t reverse engineer them. I can’t extract a formula for portraying funniness or sadness or whatever from them, and yet I keep fruitlessly looking and hoping to work out a better method than my telephone pole staring. 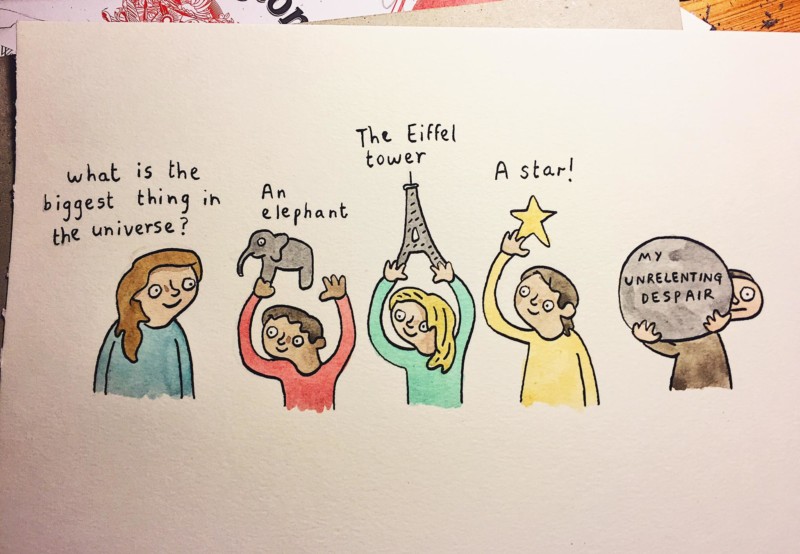 CV: A lot of your work talks about inner-turmoil. Have you found creating eases that tension for you? When did that inner-turmoil start to overtake you to the point where you felt you needed art to express it?

SW: I think a large part of it is that I started painting on Reddit when I was 18, and the average age of a Redditor is probably in the mid-twenties. So any feelings I had of my own were too immature to share, not that it was something I even thought about doing.

I don’t really think that expression eases any tension for me, except perhaps in the momentary thrill of sharing something quite personal with a larger audience. I would be lying to say that I didn’t feel some compulsion to share things though, and I am not good at talking to anyone, so painting through the wobbly distant medium of the internet is where it comes out.

CV: What advice would you give to people who feel similarly to you and people starting to get into art?

SW: Literally no idea. As you can tell by the name I have had a perverted path into the world of drawing, and I am not the best to give advice, sorry. [Author’s Note: I’d argue he gives great advice in this old, but still relevant YouTube video. Don’t sell yourself short, Hector!]

CV: What’s your favorite piece? Is there any you despise?

SW: I like the piece I did called “the past.” I think that’s one of my most honest ones to date. I dwell a lot on the past, and that painting captures that one quite well. I wouldn’t say I ‘despise’ any of my paintings, I don’t like a lot of them but I can understand that they’re just footprints in the path of becoming whatever I might become.