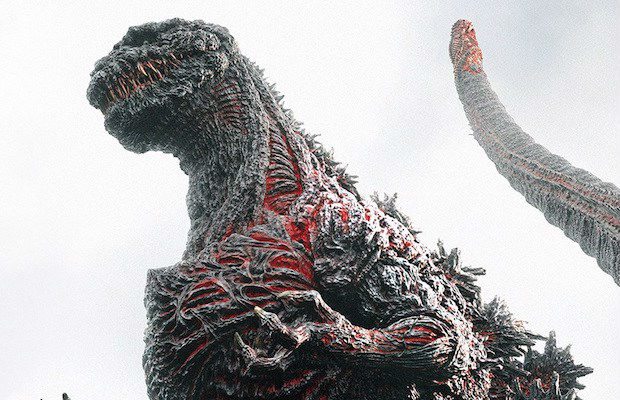 After 60 years of wreaking havoc and 12 years since the original production company Toho’s last entry in the franchise, the Godzilla franchise has found its DR. STRANGELOVE.

SHIN GODZILLA is hardly the franchise’s first foray into satire and social commentary. Many of the Godzilla films are allegorical in some way: The original film is a nightmarish recreation of Japan’s experiences with the atomic bomb and its fallout, GODZILLA VS. HEDORAH and GODZILLA VS. BIOLLANTE are both treatises on the consequences of pollution, and even GODZILLA’S REVENGE (aka ALL MONSTERS ATTACK) is about the power and necessity of stories in our lives. However, the commentary has rarely been as acute or as biting as it is in SHIN GODZILLA.

The movie hits the ground running with the big radioactive menace back in the role of an unstoppable force of nature. This is a Godzilla with open wounds, jagged fangs, and small beady eyes that never blink and never seem to move. The eyes are easily the most striking aspect of this Godzilla redesign. They remove all empathy and remind the audience that this is a horrific creature, not a cuddly defender of the weak.

Undoubtedly, there are those who will take umbrage at this interpretation of the character, and those criticisms are understandable. This interpretation is a far cry from the kid-friendly kaiju brawler who would team up with his monster pals to fight baddies. SHIN GODZILLA brings the series back to its nightmarish parable roots. With its rampant destruction and flashes of over-the-top gore, it is decidedly not kid-friendly.

That tone extends beyond the portrayal of Godzilla himself. The film centers around Rando Yaguchi (Hiroki Hasegawa), a Japanese government bureaucrat who is the first to recognize the true menace of Godzilla while his fellow politicians search for an easy, natural explanation. From there, Yaguchi, along with the seemingly endless parade of cabinet members, shuffles through conference room after conference room to begin, end, and plan each and every subcommittee required to make even the most minute decisions. 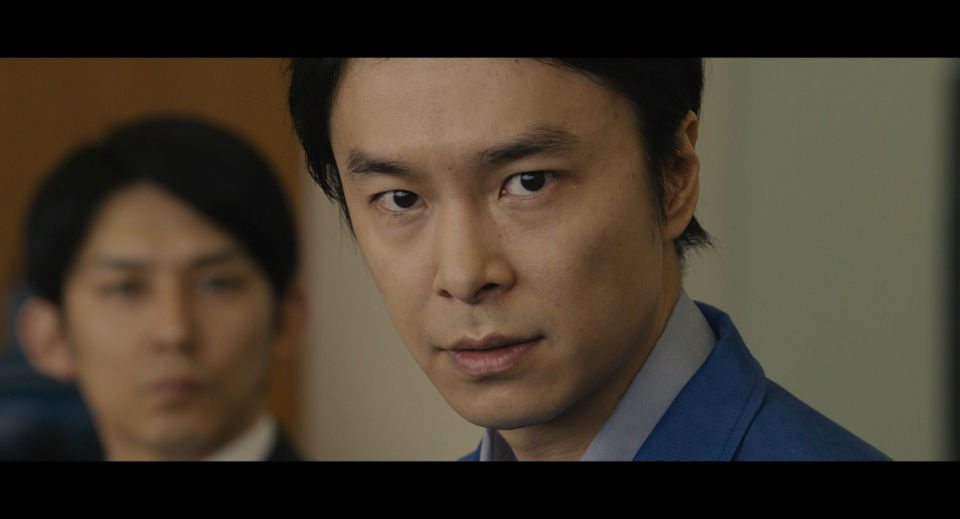 The film’s opening 20 minutes are kaiju by way of Kafka, with hopelessly impotent politicians bound by the rigid structures of the system they serve. One particularly absurd sequence involves a chain of eight officials all asking for permission to open fire (the final three are all sitting in the same room at the same seemingly infinite conference table). The most they manage to accomplish is a press conference to tell everyone what they already know. It’s an effectively absurd series of scenes, and directors Hideaki Anno (NEON GENESIS EVANGELION) and Shinji Higuchi (ATTACK ON TITAN film adaptation) nail the farcical tone of each moment. While the comedy may be directly inspired by the climate of modern Japan, the sense of frustration with intransigent regulations speaks across borders. The scenes can be somewhat overwhelming as new government cabinet members are thrown into the film with little more than on-screen text to identify their status as one more cog in the government machine. This is a note that’s maybe overplayed in the film, but those opening scenes as the audience realizes just how outmatched the government is becomes painfully funny.

The comedy quickly ends, however, as Godzilla reaches his final form and unleashes untold destruction. The chilling image of Godzilla glowing in the rubble paints a stark portrait of just how grossly underprepared every government is in the face of national disaster. Godzilla’s early destruction is reminiscent of the amateur video footage that always surfaces after a hurricane or tornado; American audiences will no doubt think back to the aftermaths of hurricanes Katrina and Sandy. All of this is a damning criticism of our ability to plan, but our inability to act. The amount of carnage unleashed in SHIN GODZILLA is deeply unsettling in scale, while Anno and Higuchi’s interpretation of classic Godzilla trademarks, like his atomic breath, have taken the concepts from camp to shock and awe. It has the trappings of a classic Godzilla film, but it is unmistakably from this era.

Both Anno and Higuchi have had their experiences with giant creatures stomping over cityscapes, especially Higuchi, whose work on the mid-’90s GAMERA trilogy is a stunning achievement. Even with these experiences, the directors are both at the top of their kaiju action game, and while Godzilla is used sparingly, his appearances on screen are consistently effective and memorable due to the execution of their reimagined Godzilla through a combination of visual effects and live, on-set puppetry. The tactile feel of Godzilla’s new appearance pours out of each frame. It’s a great exhibition of how to use old techniques synthesized with modern technology.

Special credit also has to go to the actors, who carry the occasionally unwieldy exposition-heavy dialogue and deliver it with a rapid pace that keeps the tension of the film moving. Hasegawa’s Yaguchi is endearing as the everyman trying to make sure he gets his job done right. His sincerity comes across like Jimmy Stewart in a kaiju film. Opposite him is Japanese-American envoy Kayoko Ann Patterson (Satomi Ishihara) whose initial characterization as a well-connected political socialite masks a level of cunning and resourcefulness that is gradually revealed through the film.

Human characters are rarely the draw in Godzilla films, and they often get stuck with ludicrous (in a fun way) plot lines that keep things engaging between monster battles. SHIN GODZILLA takes a different approach, using the human characters to ground the plot and add realism to a fantastic story. The word “realism” has taken on some negative connotations when applied to genre films, particularly in the attempts by comic books to be more “adult.” This, however, is realism done right. Not through gratuitous sex and violence, but by using the genre trappings as a prism to explore real world conflicts. 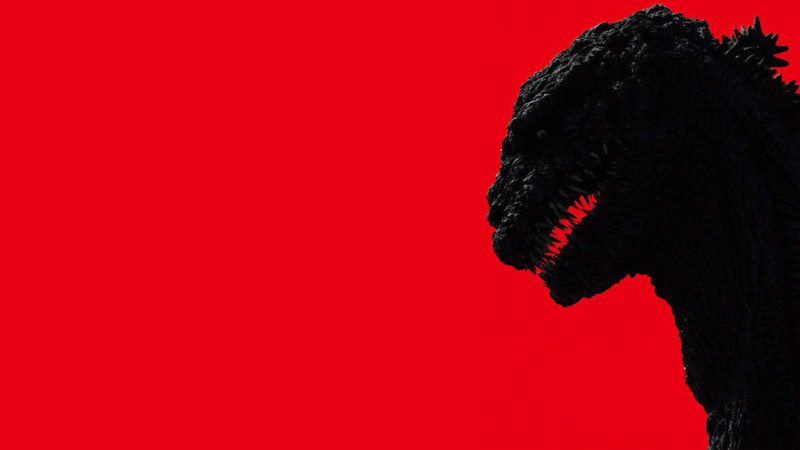 With the camp (mostly) rung out of this particular incarnation of the franchise, it’s easy to understand objections from fans who would rather watch a monster smack down (I would count myself among that group; I’m not above the delightful Jet Jaguar/Godzilla team up). However, the film’s return to the seriousness of the original is contrasted with a newfound level of belief in mankind’s ingenuity. While most Godzilla films are usually resolved with the use of some sci-fi super-weapon, like the oxygen destroyer from the original GODZILLA or even a robot version of the big guy himself, the problem in this film is solved by selfless, nameless officials working together outside of government structure. Yaguchi leads a ragtag group of eccentrics and outside-the-box thinkers who use their wits alone. These scenes are played out through whip fast scenes with STAR TREK-levels of technobabble, but they’re as thrilling as any kaiju battle. This is a Godzilla film where the greatest weapon we have is not our bombs or guns, but our minds and our ability to cooperate.

In creating this return to form, Toho, Anno, and Haguchi could have played it safe and delivered an archetypal Godzilla film. While there’s plenty of fan service (you’ll hear just about every classic Godzilla sound effect and music cue you could want), the new film takes risks and moves the franchise in a new direction. Will it work for every single viewer? Perhaps, perhaps not. It’s certainly not the Godzilla film a lot of fans were expecting, but it’s one that’s needed in 2016. In a world where political polemics keep politicians from decisive action, even when facing calamity, it’s a reminder that we all share an instinct for survival. Like or dislike the film, SHIN GODZILLA’s willingness to experiment with the genre and make such an idiosyncratic film should be respected.