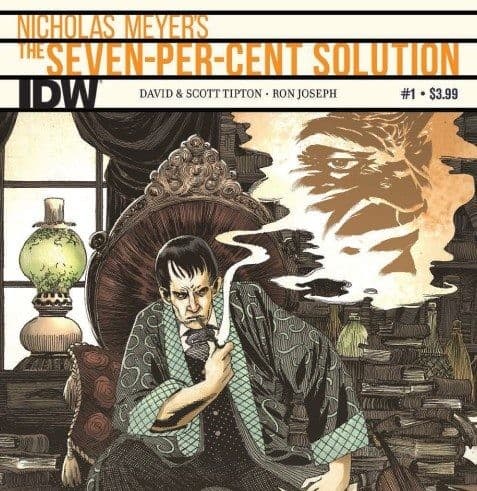 At last it can be told (or rather, re-told), but in a format so effectively done.  The true story of the conflict between Sherlock Holmes and Professor Moriarty…

In 1974, Nicholas Meyer published the novel The Seven-Per-Cent Solution: Being a Reprint from the Reminiscences of John H Watson, MD.  In this, Sherlock Holmes approaches Doctor Watson – as at the beginning of The Adventure of the Final Problem – and lectures him on the threat of Professor Moriarty.  There, however, the story takes a very different direction; rather than be a criminal mastermind, Moriarty is a figure from Holmes’ past, and his belief in Moriarty’s evil is based on a twisting of his great mind by the cocaine to which Holmes had grown addicted.  SHERLOCK HOLMES: THE SEVEN-PER-CENT SOLUTION #1 begins a retelling of this novel by David & Scott Tipton, with art by Ron Joseph, and faithfully follows the story.

I freely admit that, although I am an avid fan of Sir Arthur Conan Doyle’s original novels and newspaper stories (published in Strand Magazine back in the day), I’d not come across Meyer’s book.  That said, SHERLOCK HOLMES: THE SEVEN-PER-CENT SOLUTION caught my eye, with the idea of a Sherlock Holmes comic that explored the drugs.

It’s interesting to note that social attitudes towards heroin and cocaine were vastly different back in the days when Sir Arthur Conan Doyle began his story.  You find matter-of-fact mention of opium dens in the early Sherlock Holmes stories (Watson even recovers Holmes from one of these dens in The Man With the Twisted Lip).  In fact, in the nineteenth century Britain’s opium trade was profitable enough that the British Empire went to war on China rather than lose the Chinese opium market!  But social attitudes towards opium were changing, and by the later Sherlock Holmes stories we read a throwaway comment by Watson that he has weaned Holmes off the drugs.

That said, the concept remains one that amuses me.  The seven-per-cent solution mentioned in the title of the comic is a throwaway reference to a line in The Sign of Four:

“Which is it today?  Morphine or cocaine?”

“It is cocaine.  A seven-per-cent solution.  Would you care to try some?”

Leaving aside the questionable premise of this story, the fact remains that comic is more than equal to presenting the story in an interesting way.  The reflection on Holmes’ character in the first issues is fascinating, drawing a deep contrast with the Holmes of Sir Arthur Conan Doyle’s works, and reinterpreting the character in an interesting way.  I’m not entirely sure that I like what was subtext in Conan Doyle’s work being brought to the foreground, but given the originality of the tale I’m happy to see where it goes.

Ron Joseph’s art is picture-perfect for this book.  He captures the images of Holmes so effectively – from the relaxed Holmes, playing at the violin, to the haggard and drawn addict.  Facial expressions are strong in what is essentially a character-driven story, and I particularly love how Joseph illustrates Moriarty.  The contrast between the smug mastermind of Holmes’ delirium and the desperate schoolmaster of real life is masterfully done.

All in all, I’m not convinced by the premise of the comic – nor of the book that inspired the comic.  But I’m definitely impressed with the quality of the book.