Fans of Brian K. Vaughan’s work have probably heard of THE PRIVATE EYE. The science fiction thriller has been advertised in nearly all of Vaughan’s ongoing trades and made headlines in 2013 as one of the first comics by a high-profile creator to be released by digital comics publisher Panel Syndicate. Recently, THE PRIVATE EYE enjoyed a resurgence in popularity after it was brought to print as a deluxe hardcover edition by Image Comics.  I decided to check it out and, after reading and enjoying it, wanted to share my thoughts on its premise.

READ: Need more BKV? Check out our review of Brian K. Vaughan’s PAPER GIRLS and learn why it’s going to be your new favorite comic

THE PRIVATE EYE is a story of a dystopia. Like other stories of this kind, its potential for social commentary lies in imagining how the world fell apart. Just as the plot of 1984 provided the scaffolding for George Orwell to make points about the society he lived in, THE PRIVATE EYE fashions a dystopia that permits its authors to comment on the internet age, or, as Vaughan explains, “the future of privacy in America.” 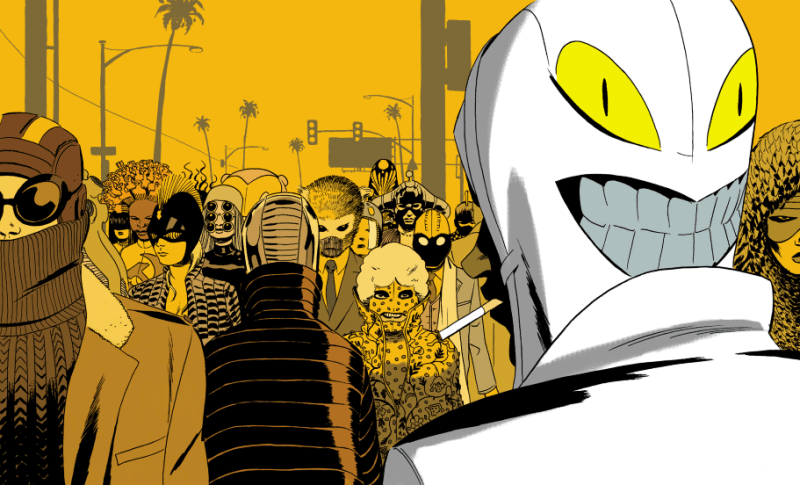 Before the events of THE PRIVATE EYE, people had, for decades, entrusted their information to a digital cloud. “The Cloud” contained every embarrassing Google search, sext, digital diary, terrible short story, and grammatically incorrect Youtube comment ever penned. It was a holding tank overflowing with the entire kaleidoscope of who we become when no one is looking. One day, “The Cloud” burst. All of our dirty secrets were laid bare and, suddenly, every individual’s digital consciousness was available wholesale to whoever cared to look.

Fast forward a few decades, and human society has recoiled hard. We’ve cut ties with digital technology, destroying our phones, the internet, and anything that connects us digitally to one another. In the wake of “The Cloud” scattering humanity’s secrets into the wind, personal privacy has become the most valuable commodity around. Stepping outside means donning a costume and a fake name. In an age without the internet, we don’t interact anonymously online; we interact anonymously in person. The world is a flesh-and-blood Reddit, where you never show your face. 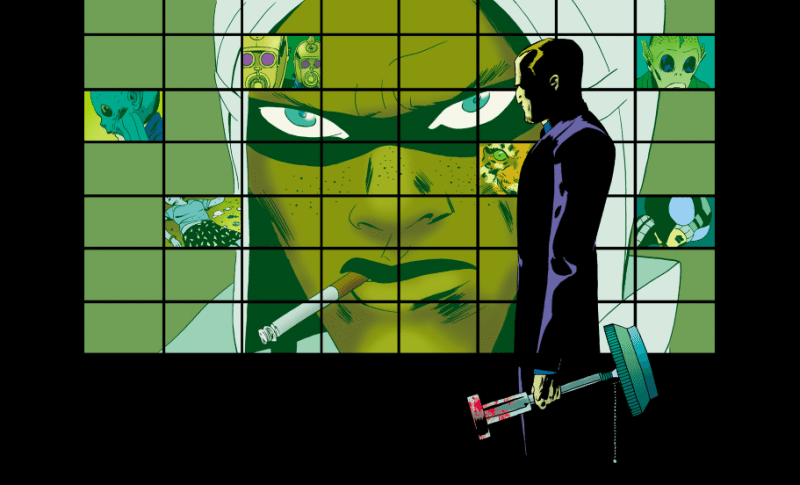 In this society of secrets, there is, naturally, a market for people who want the truth. Patrick Immelman is the class of criminal that services this market, a fringe journalist who shatters facades for a fee. We follow Immelman as a simple background check snowballs into a murder investigation with implications that could fray the fabric of the world at large.

THE PRIVATE EYE primarily asks you to engage with it as a think-piece. It is social commentary, plain and simple. You can’t believe the narrative without first agreeing to its backstory, the central tenant of which is that the exposure of everyone’s personal data would lead to mass hysteria and the need to reestablish personal privacy through a draconian system of costuming.  It’s intended as a culturally relevant projection of the future that resonates with modern issues of privacy and online over-sharing.

While THE PRIVATE EYE was channeling contemporary anxieties about privacy, it was ignoring modern movements that suggest embracing your authentic self is both necessary and liberating. The dystopic world of THE PRIVATE EYE hinges on the notion that having our private identities exposed would inspire us to run from one another in shame. Instead, I think the thought on everyone’s mind post-Cloud-burst would be: “I never knew there were other people like me.”

CASTING CALL: Why a film adaptation of Brian K Vaughan’s Y: THE LAST MAN could turn Hollywood on its head

As humans, we gravitate toward other deviations from the mean, and in the acknowledgment of our shared anomalies, we form communities. Kelly Sue DeConnick and Matt Fraction met on a message board for fans of comic book writer Warren Ellis. I joined Dungeons and Dragons Club in high school because Crissy and Brandon in Homeroom had no idea what a “fucking paladin” was, but Ted and Miranda who sat on the library mezzanine reading Terry Pratchet novels did. It is difference and the shared appreciation of difference that underscores some of our most powerful friendships. A world where the proliferation of personal truth creates a self-isolating, mistrusting universe, like in THE PRIVATE EYE, comes at the issue from a pessimistic and sociologically misinformed viewpoint.

If everyone knows that everyone else is a freak, then maybe being a freak becomes a little less freaky. 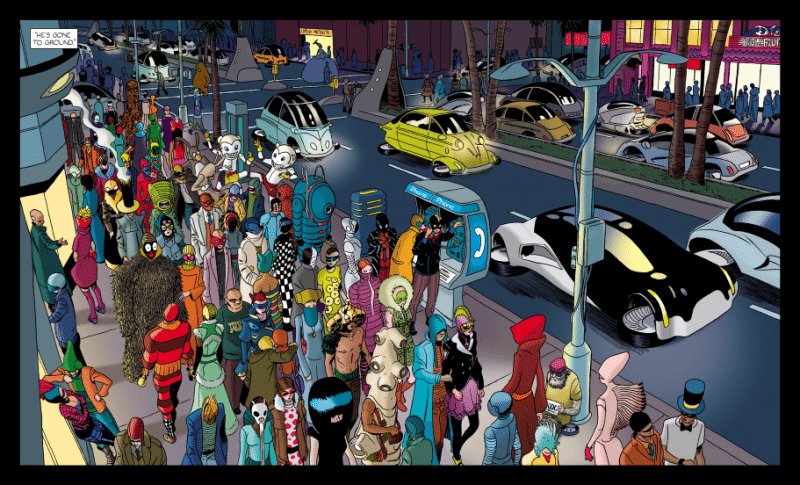 That’s why I couldn’t buy the premise. Repression of information is the hallmark of a dystopic society. Intimacy with information is not. There’s a reason the government in 1984 had to excise honesty from its newspapers. A world where we recognize how equally fucked up we are is a world where no one feels fucked up anymore. They feel normal.

A secret is only as powerful as it is inscrutable. In the Sherlock Holmes story, THE HOUND OF THE BASKERVILLES, a community believed it was being terrorized by the hounds of hell. To the residents of Baskerville Hall, these dogs were literal demons, until Sherlock proved them otherwise. They were just dogs–Mastiffs painted with glowing phosphorus to make them appear supernatural. However, as long as the truth behind their appearance was withheld, they were as real as any monster could be. We imagine shapes in the abyss that are much darker than our reality will allow. Our imaginations know a thousand shades of black.

However, in exposing the truth, we destroy secrets and the imagined worlds where these delusions rule. Secrets shrivel in the sun and, in world of THE PRIVATE EYE, the sun was shining on everyone. That doesn’t mean society post-Cloud-burst would emerge looking spotless. People do immoral things and there would certainly be revelations in this information dump that would be shocking. Nevertheless, in the aftermath, we would scrutinize one another, like the residents of Baskerville Hall finally scrutinized the mastiffs haunting their nights, and not see shadows anymore. We’d just see people. 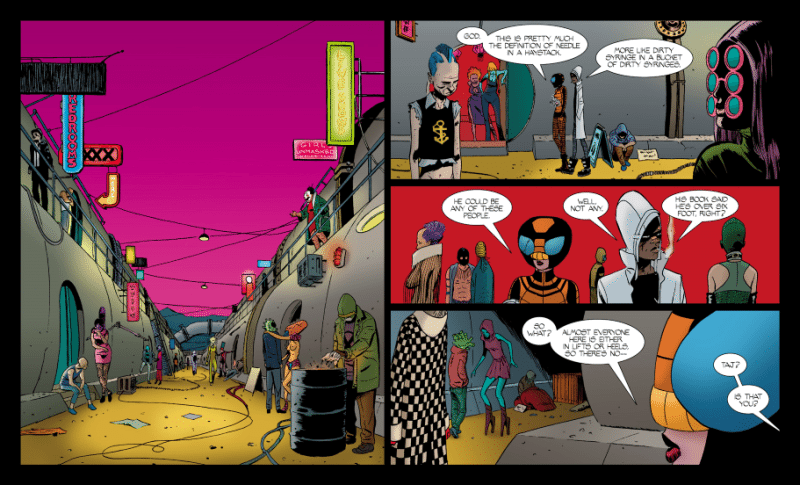 THE PRIVATE EYE attempts to conjure a dystopia which resonates with contemporary concerns about privacy and social media. However, it comes at this issue from an outlook that overlooks the reason we divulge so much information to social media in the first place. We are each dying to find someone like us. To see if our internal worlds share topographies with another. We swipe right on Tinder, update our relationship status on Facebook, and reply to threads on message boards because, in the end, we’re searching for the interactions that will legitimize our identities. We may do so under the cover of darkness or pseudonym. We may be embarrassed by what we feel, or live in a society where those feelings are deemed inappropriate. Nevertheless, we still seek communion through digital media because a part of us–the real part of us–is telling us to.

Rather than fracturing society, it’s my opinion that revealing our personal secrets to one another would bring us closer together. THE PRIVATE EYE attempts to argue otherwise, and the inconsistency of that logic with what I observe day-to-day holds me back from believing its world.