As a pillar of horror comics, it’s undeniably impressive that Richard Corben is still actively creating new work. A Will Eisner Award Hall of Fame inductee, Corben has been active since the 1960’s and is best known for his comics in Heavy Metal Magazine. For those unfamiliar with Corben, you might recognize his art from the cover of Meat Loaf’s album BAT OUT OF HELL or the Eisner Award-winning HELLBOY: THE CROOKED MAN. Corben’s new series, SHADOWS ON THE GRAVE, features the gritty and gory art that his fans love him for. However, this particular comic is not the best introduction to his work, since Corben does not properly introduce his recurring characters to newcomers. Still, fans of his work will be satisfied with Corben’s newest endeavor.

SHADOWS ON THE GRAVE #1 is the first issue in a horror anthology, both written and illustrated by Richard Corben. This first issue contains three short stories and the beginning of an ongoing narrative featuring Denaeus, a descendant of Corben’s recurring archetypal hero, Den. Mag the Hag, another face familiar to Corben fans, serves as our narrator.

In Corben’s own words, “vintage” is an apt descriptor of SHADOWS ON THE GRAVE. Although SHADOWS ON THE GRAVE lacks the eroticism that characterizes much of Corben’s earlier work, it is still evocative of the exploitation films of the 1970’s and 1980’s. Like a B-movie director, Corben is determined to disgust and shock his readers at every turn. Every story is a means to an end, with the end being a single strong disturbing, violent, or gory visual. It’s apparent that Corben knows his strength is in his shocking imagery, not in his ability to tell a story.

READ: Take a look back at classic horror comics with EC Comics and the Art of Horror! 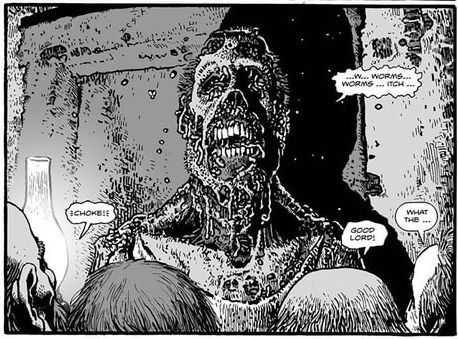 Corben’s artistic style is simultaneously distinctive and versatile. He shows a range of techniques from story to story, as he continuously plays with a merging of a cartoon style and grotesque realism. His characters have over-exaggerated facial features, particularly large noses and either bulging or beady eyes, but are shaded with great care. Dimension varies in each story, some featuring flat grays to create value such as in “For Better or Worse.” Others, like “Denaeus: Dreams and Portents,” features shading so detailed that it creates a three-dimensional effect. His decision to omit color allows him to play beautifully with contrast. Corben is evidently not afraid to use pure black shadows and backgrounds to create this contrast, and his work demonstrates a masterful understanding of value.

The introduction to SHADOWS ON THE GRAVE #1 begins with Mag the Hag explaining the concept of the comic. She tells the reader that the pages are in gray-scale as an aesthetic choice, not a budgetary matter. She also explains that the intended tone is “vintage Midwest American tableau,” and then presents a lengthy list of “themes” that will be covered in this series. Mag’s companion, Gurgy Tate, another recurring character, adds that each issue will also feature part of a story about Denaeus.

Gurgy explains only that Denaeus is a relative of Den. In Corben’s fantasy universe, Den is a ripped, nude, and particularly virile male hero. By imbuing Den with overt sexuality, Corben is effectively parodying and undermining this trite archetype. Denaeus, like Den, is a parody of the cliche hero. However, without providing this characterization of Den, it’s impossible for readers unfamiliar with Corben’s work to make this connection.

READ: What do you know about the Comics Code? Find out why SHADOWS ON THE GRAVE would have been banned if published in the 1950’s!

I concede that some kind of introduction is necessary in a collection of short stories, as a means of unifying all of the narratives. However, the introductory portion of SHADOWS ON THE GRAVE #1 is a missed opportunity. Corben does not need to explain his artistic vision for SHADOWS ON THE GRAVE to his readers. First of all, his aesthetic decision to use only black, white, and gray tones is a pretty conventional one. I understand that Mag’s justification of this is meant to be tongue-in-cheek, but it still seems completely unnecessary. Furthermore, Corben’s art is strong enough to give the audience the “vintage Midwest American tableau” vibe. He does not need to explicitly tell us the intended setting.

A more apt use of this space would be to prime new readers on the recurring Corben characters featured in SHADOWS ON THE GRAVE. First time readers would have appreciated a proper introduction to Mag the Hag and Gurgy Tate. Instead, Corben provides a lengthy list of future stories and an unneeded explanation of the comic’s tone. 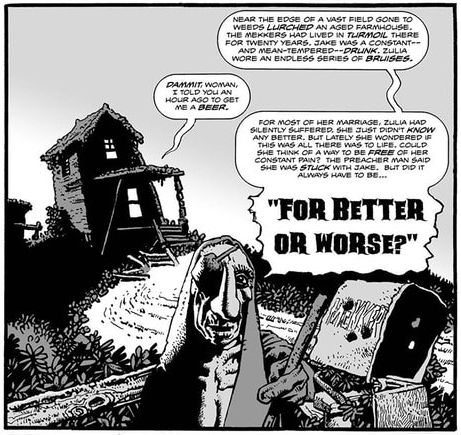 More importantly, an introduction to Den and Denaeus is necessary for people who are not familiar with Corben’s work. The tone of the Denaeus narrative in SHADOWS ON THE GRAVE #1 is entirely different than the other short stories. While the rest of the stories are set in 20th century middle America, Denaeus’ narrative appears to be set in ancient Greece. I cannot justify why Corben chose to include this in SHADOWS ON THE GRAVE as opposed to creating a separate series entirely.

It’s possible that his hardcore fans won’t mind this drastic change in subject matter that seems tacked on to the end of SHADOWS ON THE GRAVE #1. Undoubtedly, they’re excited that Corben is not only creating new work but also adding onto his extensive fantasy world with the narrative about Denaeus. However, it’s not apparent how this particular narrative relates to the rest of SHADOWS ON THE GRAVE conceptually.

READ: We found 4 comics that are almost as scary as Trump’s presidency! That’s pretty scary!

There’s nothing wrong with an established creator such as Richard Corben creating work specifically for his established fan base. The comic does not need to be accessible to newcomers to have artistic merit. However, I cannot say with confidence that SHADOWS ON THE GRAVE is intended for Corben fans only. If Corben did create this comic just for his fans, why does he feel the need to explain himself artistically? And if readers new to Corben’s work need this explanation, why doesn’t he also introduce his recurring characters? Although the introduction is a very small portion of SHADOWS ON THE GRAVE #1, it creates confusion in what should be a pretty conceptually simple vehicle for new art.