SEX CRIMINALS is a comic that does sex right, but more than that it does relationships and feelings better than any other comic I’ve read. Many comics feature sex as an adolescent titillation, meant to entice, not discuss.

Matt Fraction, writer, said in an interview with Wired,

“There’s a lot of comics that peddle in titillation and sensationalism but are there comics capital-A about sex? Not that I can think of. Which was part of what drew me to the idea of the project. I don’t think of a drawing that gazes surreptitiously up at the pudendum of a woman as she kicks another woman in the face so hard we see both her tits and her ass in the same pose as being about sex, I guess.”

Not only is the SEX CRIMINALS story interesting, but also it remains classy or, well, as classy as it can be. Between the raunchy art and witty quips, there lies a much deeper story. It’s a story of discovery, sadness, and, in the end, love.

The story hinges on the discoveries by the protagonists, Jon and Suzie, after a one night stand. These discoveries lead to planning a bank robbery, executing said bank robbery, and paying a visit to an adult -ehm- entertainment store. 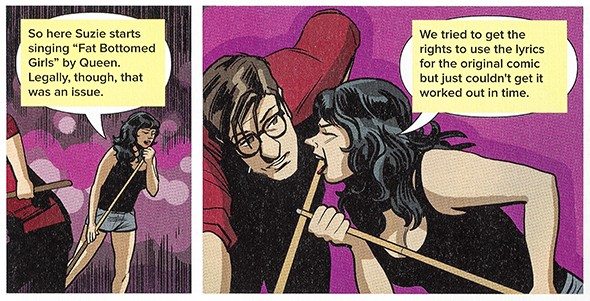 “They do what any young, fun, sex-having sexy persons would do after discovering their sex-having freezes time and space,” he adds, “they start robbing banks.”

Fraction and Zdarsky are really, really good at what they do. The pair work together so phenomenally well, with Fraction’s writing and Zdarsky’s art complementing each other beautifully. Pick up an issue of SEX CRIMINALS and it is easy to see why the book has been nominated for (and won!) several Harvey and Eisner Awards.

Zdarsky and Fraction are not only an incredibly talented duo, they are also close friends. At the Harvey Awards 2015, Zdarsky was nominated for a humor award for SEX CRIMINALS without Fraction. When Zdarsky won, however, he declined the award because Fraction was not nominated with him.

“It’s nice having people realize how special I am and how humorous I am, and I truly appreciate everyone who voted for me, but the award, as it stands, doesn’t make a lot of sense,” Zdarsky wrote. “The fact that I was nominated for a humor award for SEX CRIMINALS without the writer of said series, my beloved chum, Matt Fraction, is wrong. On every level. I pointed this out to the Harvey Awards and told them I wished to have Matt on the ballot with me, or to remove me completely, and they declined to do either.”

SEX CRIMINALS is a book that’s begging to be picked up. Even if you don’t think that it’s your thing, you should definitely check it out, as it might surprise you. It has sex, yes, but it also has a whole lot of heart that can’t be ignored.

READ: Bored waiting for the next comic book movie? Check out our weekly round-up of movie news!