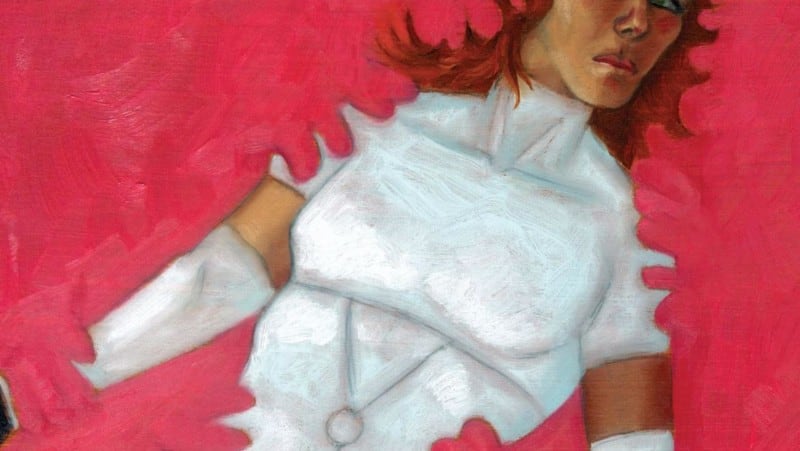 SEX CRIMINALS #17 continues to be one of the most outrageous mainstream comics being produced. Matt Fraction and Chip Zdarsky appear to be digging deeply into the likes of 4chan and Reddit for source material, and I have to say I’m perfectly okay with that. Fraction adds a nice spin to this issue with its change of narrator, and Zdarsky’s artwork makes these bizarre fetishes and sex scenarios uncannily interesting to look at. You feel a little dirty after reading it, but perhaps that’s the point, like always.

READ: Not familiar with this series? Here’s an introduction to SEX CRIMINALS!

SEX CRIMINALS #17 is told mostly from the perspective of Myrtle Spurge (Kegelface), whose tone is very dry and humorous. She spends the majority of the issue describing a specific skell and his fetish, but she also delves into her life as a real cop and a sexual cop. We learn that these sexual cops are always on the cusp of getting off, always beginning but never finishing, for they always wish to be ready when someone else with sexual powers emerges and presents themselves. The confrontation Myrtle eventually has with this “Pikachoad”-creating sex criminal shows just how aggressive she is as a person, and it reveals that she doesn’t have it out specifically for Jon and Suzie as we’ve guessed in previous issues. She’s simply doing a job she believes is right. As her dissatisfaction at home is revealed in the opening pages, we get a glimpse of how she has time to take on this job while living her mundane life. 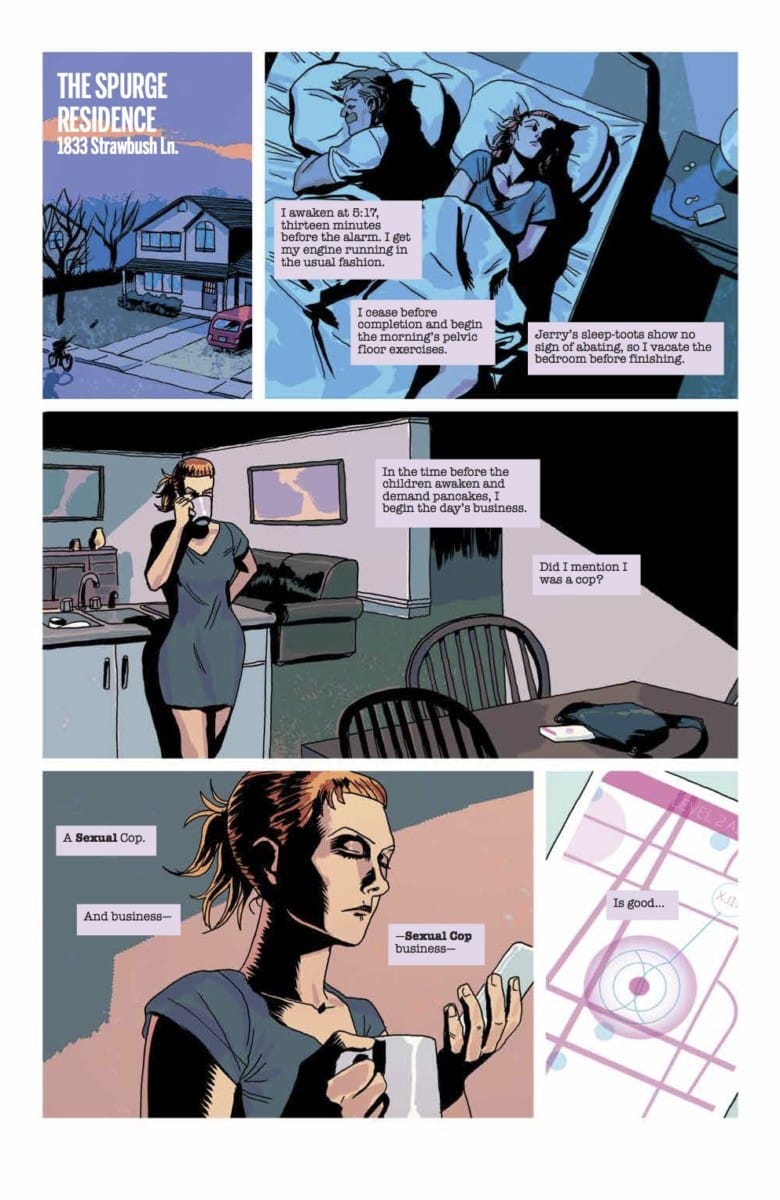 Matt Fraction clearly does not give a $!#%. He’s gone stranger in previous issues, but the tone he uses for Myrtle here normalizes everything that is occurring in this hyper-sexualized comic. Catching a man who creates tiny sex goblins when he’s trying to get off is just another day in the life for a sex cop. And for that, I love it. There’s no doubt that this is a humorous comic book, but it delves deeply into sexual taboos and fleshes them out, making us as readers question why a comic like this is so funny in the first place. Though, really, tiny pink sex goblins that form from a semi-masochist’s sex powers are pretty damn hysterical.

LISTEN: Need more sex in comics? Listen to our podcast on just that!

I find Fraction’s characterization of Myrtle to be stellar in this issue. Before, she came off as just being a genuinely mean person. While that’s still the case, we learn why: someone has to keep these people in check. Someone has to be the bad cop in this situation because if someone with these powers exposes themselves, everyone else with sex powers is put into jeopardy. So Myrtle saddles up and takes responsibility, and while her morals and actions are questionable, it’s impossible to deny her reasoning isn’t all that bad. Unlike her partners, she’s both a real cop and a sexual cop, and those two jobs intersecting plays a huge role when molding her character. She is clearly the most determined member of the sex cops in SEX CRIMINALS #17, as she takes control of the situation herself almost immediately. This on top of her disrespect towards her partners reveals that Myrtle places much pressure on herself in this sex-cop role, and it’s interesting to wonder why that is. It’s quite possible she has a strong sense of justice, and that’s what makes her a cop in both of her lives. Or perhaps it’s something deeper, like a need to be in control, or maybe the obvious for this series: sadism. 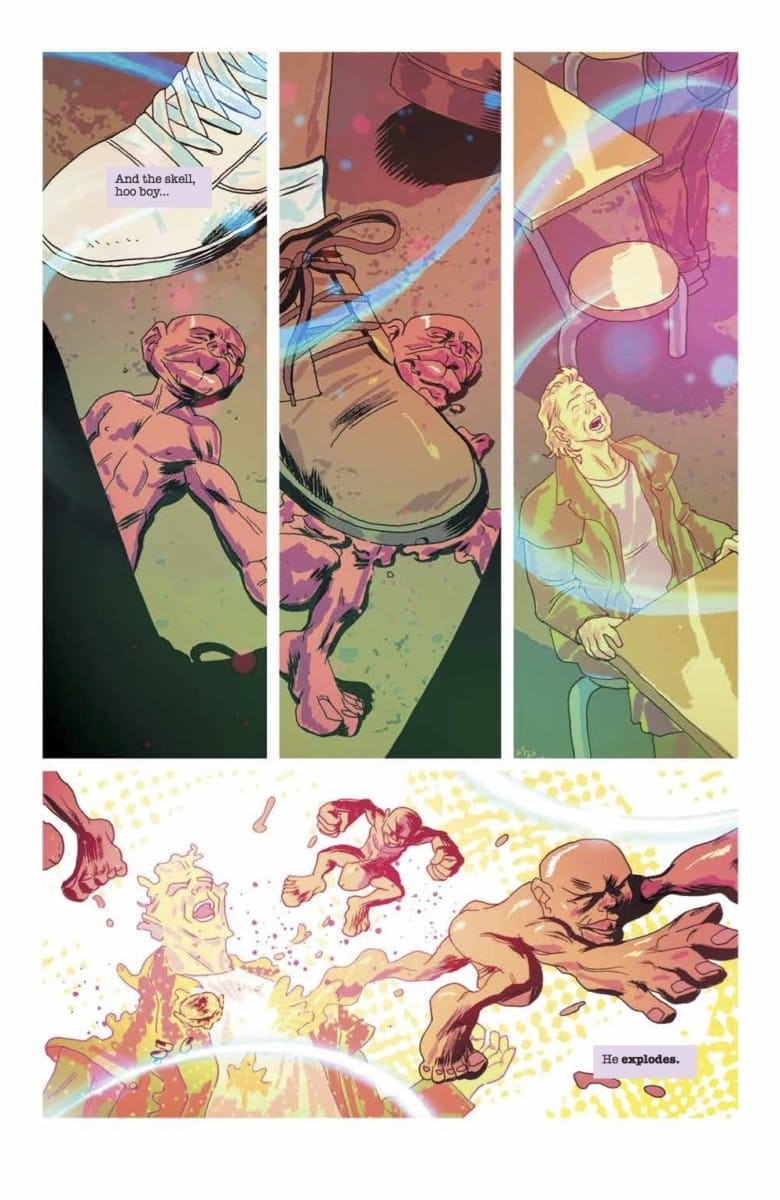 Chip Zdarsky’s artwork is as wonderful as ever. The facial expressions on the characters totally reveal the emotions behind their words, and the wavy and spacey details portraying a stoppage of time that occur during “the quiet” are as good as ever. I’m curious who thought of these miniature sex goblins, but it’s clear Zdarsky is not afraid to let his imagination run wild here. The details are uncanny yet seductively interesting to look at, and even the more mundane scenes are beautifully human and sincere. Elizabeth Breitweiser’s coloring is also a huge contribution to SEX CRIMINALS #17. Generally, she uses cool and comforting hues that are always pleasing to look at. However, I also really enjoy the beautiful, fluorescent colors that we see in “the quiet.”

Overall, SEX CRIMINALS #17 takes a step away from Jon and Suzie to give us much needed details on Myrtle Spurge. It would be nice to get more details on her family and personal life, but just seeing her in action as part of the sex police is really neat. Her step-by-step analysis of the skell’s fetish is solid writing from Fraction. It manages to further the depth of this comic without even focusing on the main characters of this series, and I believe that is what makes a run like this so strong and capable of lasting.

But seriously, tiny sex goblins nicknamed Pikachoads. Matt Fraction seriously does not give a $!#%.