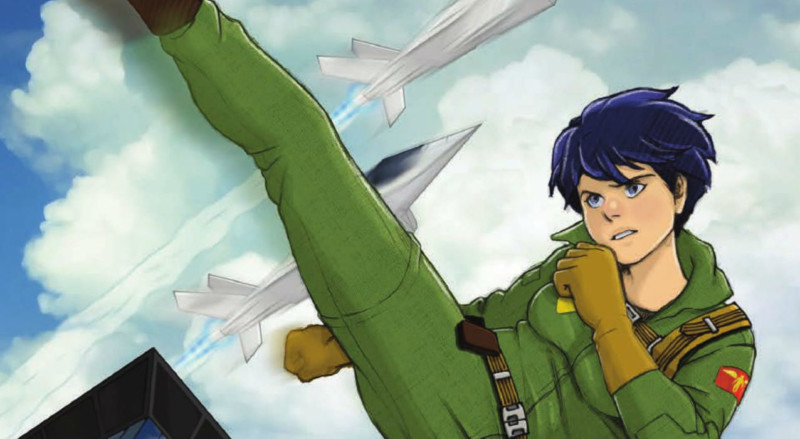 Have you ever wondered what really happened to the Challenger spacecraft? Are you certain that humans didn’t build the pyramids? Does the idea that the moon landing was faked excite you? Well, look no further than writer Ramon Gil and artist Ian Waryanto’s SENTURIES #1, a Kickstarter comic that promises every science fiction conspiracy your imagination can conjure up is true.

I got to admit, this comic brought back memories of my younger self trying to discover where Amelia Earhart disappeared to in the Bermuda Triangle. If anyone could figure this out, it’s the eight-year-old girl with a 3-D book on how to spot extraterrestrial life. SENTURIES #1 attempts to answer all of the hard-hitting questions about alien existence. The issue primarily follows former Air Force Project pilot Alex Ozuka as she attempts to unravel the mystery of her father’s disappearance from the Challenger spacecraft.

The story frequently switches from the present to past as Alex gets closer to solving the mystery. The largest time jump is to 1937, which connects some famous disappearances to the story’s Alex’s dad’s disappearance. Personally, I found it difficult sometimes to switch back and forth even when they told you the date. Especially since the present day has some first-person narration from Alex herself. This raises a question: is she aware of what’s going on in the past already? Probably not, but it did confuse me. Overall, though, the story reads easily enough for one involving time travel.

READ: Want to know more about Kickstarter comics? Check out All Hail the QUEEN!

Alex’s determination makes sense – most would be heartbroken if they lost a family member. Yet sometimes her character feels like the “tough girl” trope rather than a fleshed-out human. This happens when she gets into a dispute with a superior officer. He, of course, isn’t blameless, as he spews misogynistic crap out of his mouth like he’s on the set of MAD MEN. Still, this isn’t an excuse for Alex’s flat characterization.

TWIN PEAKS But A Comic Book

The art closely resembles the visual styles of noir. Ian Waryanto chose a blue palette as opposed to a traditional color or black and white. I was skeptical of this at first, but when I saw how detailed the shading was, I instantly fell in love. It makes the shots of space feel extremely mysterious and terrifying yet exciting in its vastness.

The only real complaint I have about the art is sometimes when you see the characters’ faces close up, they appear a bit flat. Sometimes when Alex is driving, her body seems indistinguishable from the background. On a large scale, though, this isn’t noticeable.

Extraterrestrials Among Us: Final Thoughts on SENTURIES #1

Narratives about alien life forms will always have a place in my heart. It’s exciting for me to read a comic like SENTURIES #1 that captures that air of mystery I remember having when I was a girl. I could see younger readers picking up this comic and becoming inspired to gaze up at the stars or go into researching unexplainable phenomena. Alex’s adventures are just beginning, and hopefully, more exciting mysteries will follow for her and us.

The SENTURIES Kickstarter ends June 9th at 11:59 PM. To learn more about or to support the comic, click here.