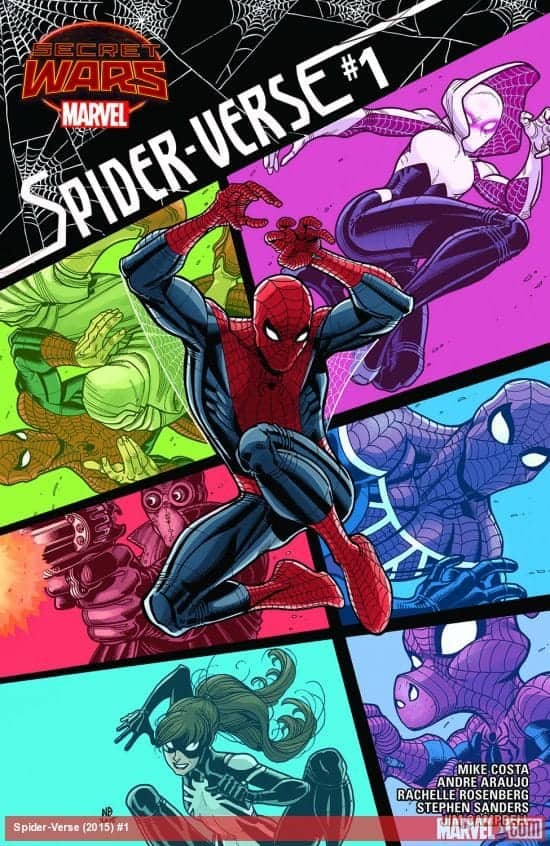 The issue kicks off in a cemetery, with Spider-Woman (the Spider-Gwen version) happening upon two grave-robbers. As she dispatches them, Gwen narrates to herself that her memory is fuzzy as to who she is, using the example of songs she can only seem to hear in her dreams, a reference to the characters drumming with the Mary Janes in her normal universe. After waiting to ensure that the police pick up the grave robbers, Gwen goes to visit gravestones, one marked for her father Captain George Stacy, and one marked for herself, indicating that the area of Battleworld where she’s ended up has her and her father’s deaths in common with the classic 616 Marvel Universe.

Following the cemetery beginning, the issue takes a detour to Indian Spider-Man Pavitr Prabhakar spying on smugglers near a dock. Before he’s able to make a move against him, Spider-Man UK (Billy Braddock) and the Anya Corazon version of Spider-Girl arrive. They’re able to quickly dispatch the smugglers, but are quickly ambushed by armed shock-troops and are nearly captured before Pavitr saves them. The three spider-characters convene under the Brooklyn Bridge and discuss their situation. All three of them are experiencing the same memory issues as Gwen, with Pavitr suggesting they’re all connected by a web. 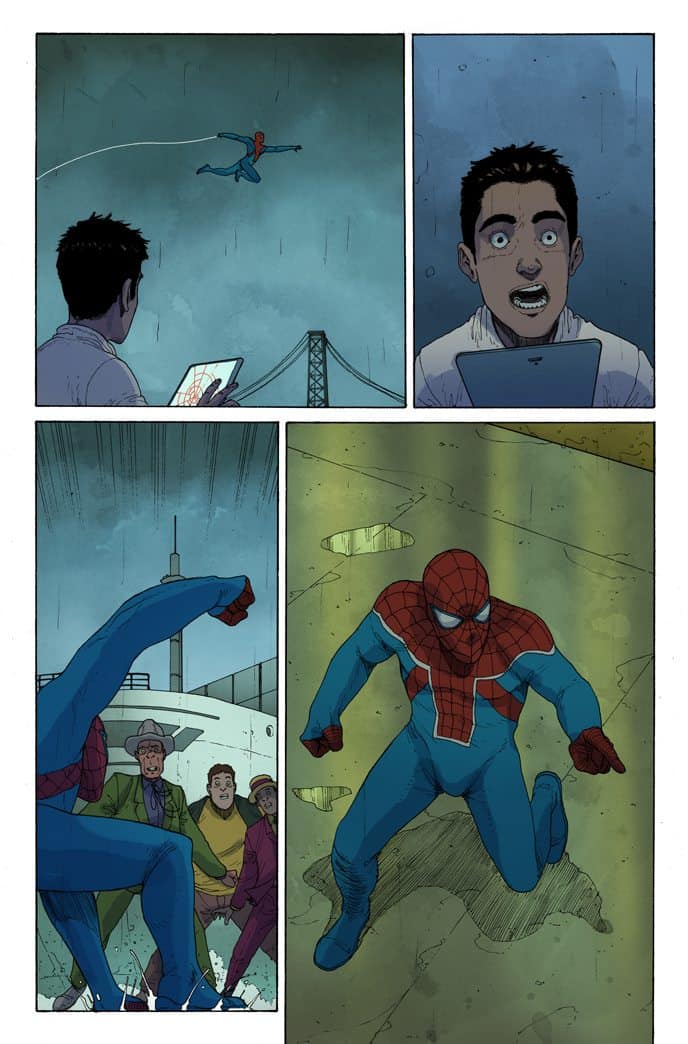 The issue switches back to Gwen’s POV, and through her expository narration we learn a bit more about the area of Battleworld where the series is set. The original Gwen Stacy of this world died very similarly to the 616 Gwen Stacy, leaving Gwen very confused about who she is and why she can’t remember anything about her life. The big difference in this universe Spider-Man disappeared after her death, meaning that Norman Osborne escaped justice and has publicly become the mayor of New York City and Doom Baron for the area. Gwen has secured a job with his company under a pseudonym to determine what, if any roll Normal played in “her” death.

Gwen eventually discovers a locked special projects vault at the company’s headquarters, and after casing it for several weeks, she decides to break in. After capturing one of the scientists to use his ID and thumb print, she gets into the vault. Initially she finds a tablet with a file marked “Sinister Six” that contains pictures of various spider-heroes, including herself. Next she discovers a weakened Peter Porker (The Amazing Spider-Pig) hooked up to a hospital bed. The main story ends with Gwen attempting to free him, only to be confronted by Norman Osborne who reveals he knows her name and has been waiting for her. The issue ends with a short backstory explaining Spider-Ham’s Battleworld backstory. 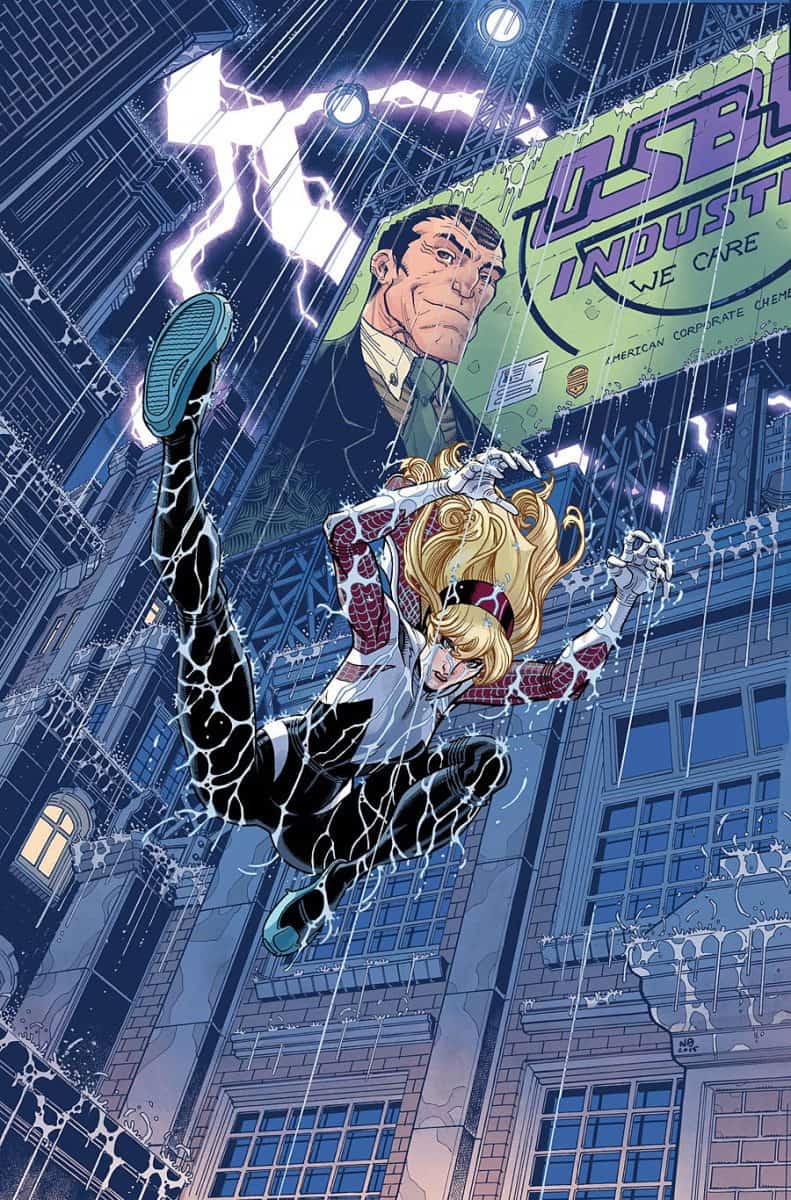 Mike Costa has a pretty good handle on the featured characters though. The Spider-Gwen version of Gwen Stacy is the central focus of the story, and Costa uses her quite well. She retains her quippy and likable persona from her solo series, but adds a layer of pathos as she struggles to remember exactly who she is and figure out who she is and how she fits into the world.  He also has the voices of the other three Spider-Verse characters down pat, though they get very little page time.

Plot-wise, the story falls into a typical problem that plagues first issues, especially those that gather various disparate characters together into a team. Namely, the issue uses so much exposition to set up the characters separately that it doesn’t set up the plot moving forward. Obviously the Spider characters will eventually team up against Osborne, but outside of what Gwen sees on the tablet, we have little indication as to why the others will be involved. I’m certainly not advocating speeding through plots, but this issue could have used more plot-building.

The art of the issue stands out as a highlight. Andre Araujo’s pencils are especially crisp. His characters have a great mix of realism with subtle cartoonish flourishes, and smooth fluid movements. Colorist Rachelle Rosenberg adds warm tones that perfectly compliment the pencil work, with the cemetery segment being the book’s artistic highlight. 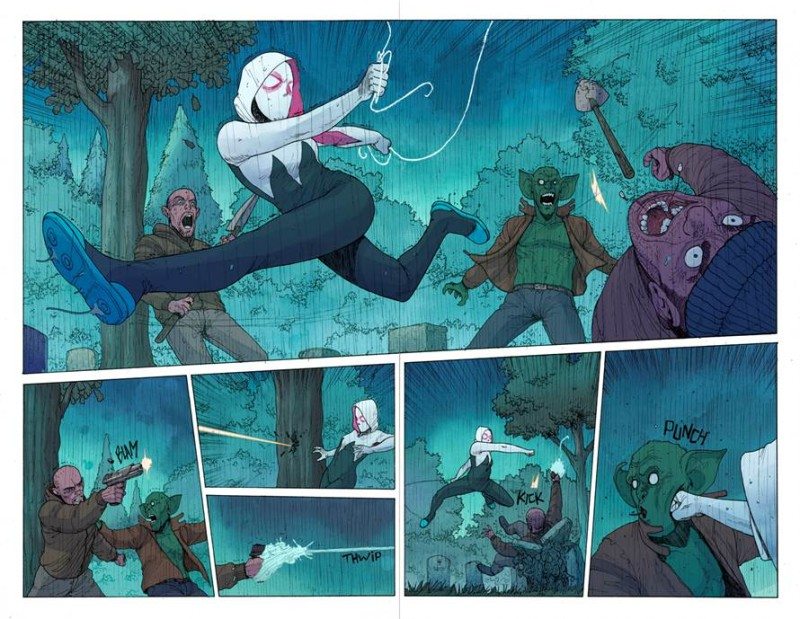 Secret Wars: Spider-Verse #1 is a solid starting point for the series, setting up several interesting plot-points going forward, especially the confrontation between Gwen and Norman Osborne for future issues. However, as a single issue, the comic suffers a bit from all the set-up.