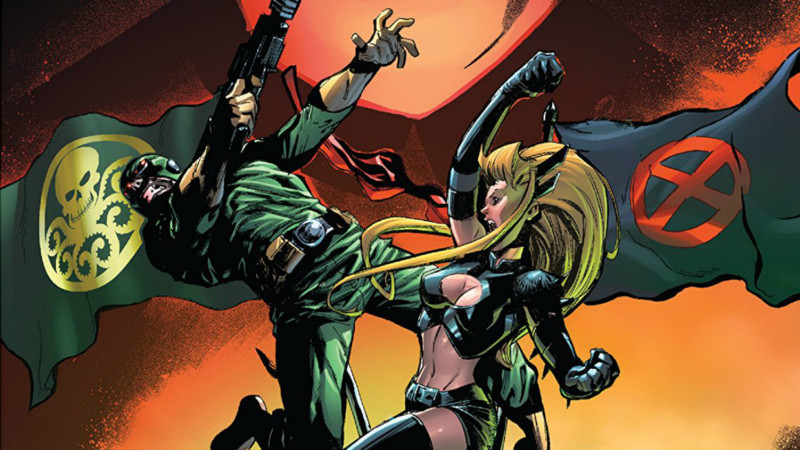 SECRET EMPIRE UNITED #1 is a tie-in to the massive SECRET EMPIRE event. This book lives up to the promise Marvel made that this story is integral to the SECRET EMPIRE saga and to the X-MEN line. Top-notch writing from Jim Zub and action-packed art from Ario Anindito make a compelling read that’s sure to please X-fans everywhere. If you wanted to know just what Marvel’s Merry Mutants have been up to since SECRET EMPIRE began, this is the book for you!

SECRET EMPIRE UNITED #1 begins with a duo of mutants beating up a random human completely unprovoked. Zub inverts the usual “humans attacking mutants” visual, cleverly reminding the audience of Captain America’s reversal in the pages of SECRET EMPIRE. Prior to Hydra’s takeover, mutants were hated and feared minorities. As seen in pages of CAPTAIN AMERICA: STEVE ROGERS, Cap ceded a portion of California to Magneto as a sovereign Mutant territory in return for the mutants keeping out of Cap’s hair during the Hydra takeover.

This nation, called New Tian, belongs to the mutants, and the mutant duo wasn’t afraid to make that known to the unsuspecting human. The mutant police arrive, but they don’t come to this man’s aid. Instead, they choose to believe the mutants’ lie that the human threatened their lives. Zub quite effectively shows what life in New Tian is like for humans and mutants in these two pages.

Tonight There’s Gonna be a Jailbreak

As this happens, the mutants Frenzy, Random, and Sunfire create chaos at the border between New Tian and America. They shout “Death to Hydra” while ransacking the checkpoint and attacking Hydra foot soldiers. Otto Octavius stops them and takes Sunfire into custody, angering Xorn, the king of New Tian. Zub crafts a darkly humorous scene when Octavius proclaims that the border is secure and, at that instant, it cuts to Arnim Zola sitting comfortably in Washington screaming the exact opposite. Considering the running theme in the main SECRET EMPIRE book of including political satire, it’s hard to believe this isn’t a reference to current events.

Xorn, along with his advisors Beast, Archangel, and Sebastian Shaw, decides to break Sunfire out of jail. A ragtag group of mutants face off against Hydra’s Avengers. Zub masterfully shows just why Cap is afraid of starting a war with the mutants — second-stringer X-Men like Marrow and Boom-Boom take down the likes of Taskmaster and a demon-controlled Scarlet Witch. Zub doesn’t need to explain in dialogue why Cap fears the X-Men. Instead he, along with Anindito, shows it through the action.

Without going into spoilers, SECRET EMPIRE UNITED #1 makes some major revelations about a certain New Tian resident as well as a member of Cap’s inner circle. These revelations will most likely have grave consequences for Hydra’s America. It certainly ramped up my excitement for the rest of the SECRET EMPIRE event!

Anindito does a great job creating battered fight scene environments. Smoke billows from a building as damaged cars littered with nicks and dents burst into flames. He also makes it a point to have continuity in his art. When Sunfire gets struck in the face on one page, Anindito draws him wiping away a trickle of blood flowing down his chin on the next.

Anindito also strikingly captures the emotion on his characters’ faces when they’re passionately screaming for their cause. During Sunfire’s capture, he stops to plead his case to a television camera. As he’s yelling, a strand of saliva connects his front teeth, and little droplets fall from his mouth. I can almost feel his warm breath through Anindito’s artwork.

One problem I did have with the artwork is Anindito’s portrayal of Deadpool. Anonidto draws Deadpool making ridiculous poses during his fight with Marrow and Boom Boom. As seen in recent issues of DEADPOOL, he cares about making Steve Rogers proud. He wouldn’t be clowning around nearly as much if he knew his defeat would disappoint Rogers. He even shows a rubber chicken flying out of Deadpool’s pants when Boom-Boom blows him away. This seems a bit too ridiculous, bordering on a parody of Deadpool in what’s an otherwise quite serious book. This is just a minor gripe, though.

Overall, this is a great comic filled with exciting action and political intrigue. Zub includes some great satire on top of a story about a minority in a large nation becoming a majority in a smaller one. It solidifies itself as a must-read if you’re following the main SECRET EMPIRE story. If you’re an X-fan who isn’t interested in SECRET EMPIRE, I’d recommend it anyway since some underutilized X-Men return, and it may change the course of X-books in the coming months.