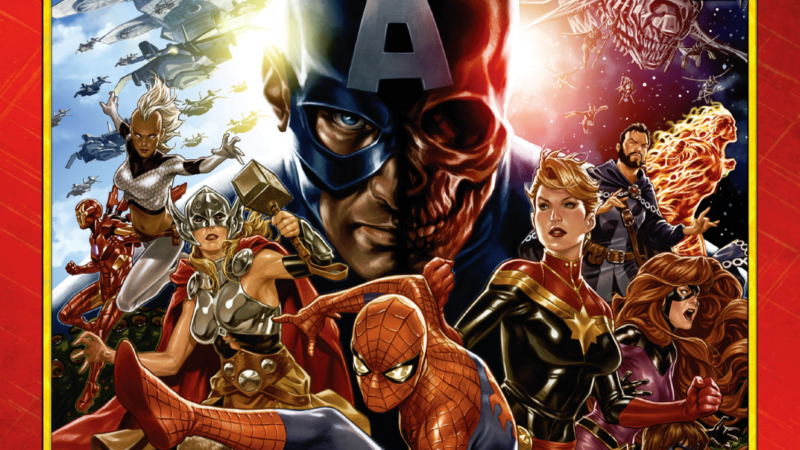 Now it’s finally here, and before I get into the spoilers of this first issue, I have something to say to anyone in the aforementioned groups. Read SECRET EMPIRE #1. It deserves your chance. Steve McNiven’s artwork is gorgeous. The story has nuance, dark humor, brilliant commentary, and it is as timely as ever. As it stands, I feel this issue proves a promising start to what will hopefully be a surprising, smart, and sympathetic series.

READ: Need to catch up? Check out our SECRET EMPIRE #0 Review: Hail Hydra!

WE’RE HEADED TO SPOILER-VILLE FOR SECRET EMPIRE #1. IF YOU DON’T WANT TO SEE DETAILS LOOK AWAY!

Immediately, we find ourselves thrust in the post-Hydra takeover United States. We see a classroom where the children undergo re-education on previously known facts about American History and the Marvel Universe. When a boy asks why they’re taught something different than what was in their history books just a year earlier, the teacher responds that the previous history books were part of the “Great Illusion.” Ironically, the Illusion is the idea that the Allies were losing the war and so, they erased everyone’s identity to make them think Hydra had lost the war.

Any reader familiar with the actual story behind SECRET EMPIRE knows that Hydra actually used a cosmic cube to rewrite Steve Roger’s reality and make him a Hydra agent since childhood. Beyond an in-joke to SECRET EMPIRE’s origins, this clearly stabs at our current age of “alternative facts.” We, the readers, know the truth, but the uninitiated learn a warped version of it.

Another layer involves the propagandist media claiming that Hydra has led to amazing things like decreased crime and increased employment, while the truth lies in the fact that was made possible by violent and fascistic means. Spencer also takes on an extremely dark yet humorous view of current conspiracy theories. While the internet is a hotbed of debate on mind-controlling substances in the water and chem-trails, Spencer reveals this as actions Hydra takes to maintain control. When a video of resistance fighters garners 50 million views in a few minutes, a member of Captain America’s cabinet remarks, “I told you we shouldn’t have let them keep the internet.” This fight between the media on our TVs and the media on our other screens will definitely feel familiar.

We also see the fate of the other Marvel heroes, with Captain Marvel still trapped in space. She transmits a message to Earth, stating that the Chitauri will break through her defenses at any moment. Her last message warns the world that Captain America used fear to manipulate her and her forces, causing them to close in on themselves for protection only to end up trapped and unable to escape. We are no stranger to fear mobilized into a political tool. Right before her message cuts out and her defenses are breached, she warns that complacency and looking away is what Hydra is counting on in order to spread.

There is no shortage of resistance in this book though. Members of the Champions team, as well as some more classic Marvel characters, make up the “Underground Fighters.” Within the fighters, though, there’s a range. The young heroes are brash, sloppy, and unafraid to make a scene. The older heroes are careful, wary, and distrustful of any new person or piece of information. How these characters react not only correspond to their age, but also to how well they actually knew Captain America.

The force of the betrayal made them less hopeful, nostalgic, and slightly bitter. They don’t have the same energy to fight as those who aren’t taking it so personally and instead just see a world they need to change. The heart of the series is definitely going to lie with how each character in the MU will react and resist, and that character journey is off to a great start.

Will the Real Steve Rogers Please Stand Up?

A huge amount of the backlash this series received came from people who felt like it’s a complete departure from the character. How can Captain America be himself while still a part of Hydra? Well, SECRET EMPIRE #1 shows us glimmers of internal struggle that suggest the old Steve is still in there. His old friend, Rick Jones, is imprisoned for treason and Rogers is reluctant to punish him with death. He keeps attempting to convince his partner, Sharon, that Hydra has helped people by making strides in medicine and education.

Rogers keeps insisting that he’s doing everything he is for the common good. He refuses to understand those who keep telling him that it just looks good from the outside. The truth’s undeniable, as the improvements come from a rotten place and will crumble. Rogers can’t see it though, and the cacophony of Hydra voices doesn’t help. Ultimately, he doesn’t want to see it.

However, Spencer makes sure that the reader’s experience isn’t undermined by the question of “will he get his memories back?” This isn’t an amnesia storyline. He isn’t a copy or a clone. Steve Rogers’ entire identity has been rewritten, but this is still him. This insistence makes sure the emotional impact of the story isn’t lost. The entire Marvel Universe, and the reader, has to look at the horrors Rogers commits and experience it in full force. SECRET EMPIRE retains its strength by refusing to back down on its main promise: Captain America is the bad guy, no matter what we’d like to believe.

READ: Want to get an inside look? Check out our interview with Nick Spencer at New York Comic Con 2016!

I found this issue an enjoyable but intense read all the way through. I was continuously on the edge of my seat waiting to see how things will progress. The shocking ending and cliffhanger were stirring and made me feel both dread and excitement for the next issue. The political commentary was dead on. This series had a lot weighing on it due to controversy, but from this issue, I know it will deliver.

McNiven’s art beautifully represents the wide range of emotions from the characters, and the writing managed to straddle the line of making me crave Rogers’ redemption while making me ask how he can ever be forgiven. Nick Spencer is fearless in presenting this kind of story and pulls no punches. The story fills you with joy to read and look at. It also fills you with dread on the mounting suspense. SECRET EMPIRE #1 feels monumental to read, and it’s a book worthy of a Marvel Universe-wide event.