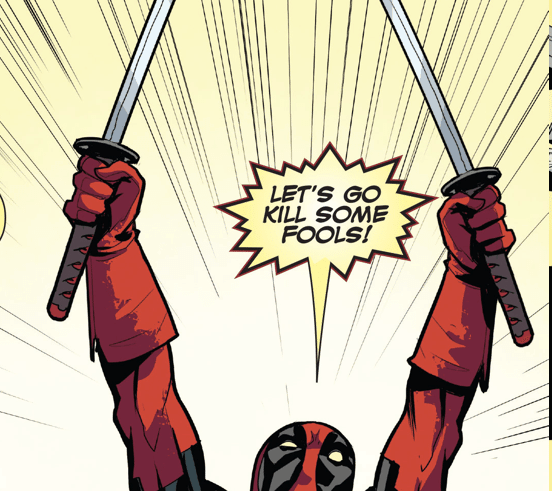 Everyone knows the story of Marvel’s 1984 “Secret Wars” saga- the epic battle royale “sponsored” by Mattel in order for them to sell Marvel dolls (Action figures mom! They’re Action Figures!). What you dont know is that Wade Wilson, (better known as the anti-hero Deadpool…or just “hero”…”mercenary” maybe? It changes more than which actor is currently playing Spider-Man) was a part of the Secret wars the whole time!

Okay, so Deadpool wasn’t actually a part of Marvel’s Secret Wars. In fact, Deadpool wasn’t even introduced until The New Mutants #98 released in 1991 (seven years after Secret Wars was released). This entry into the Deadpool series is another example of Deadpool’s writers poking fun at he pre-Deadpool marvel universe by adding Deadpool into supposedly “lost issues” of older comics. Some examples of this include the issue Deadpool #07 where Deadpool helps Tony Stark get over his alcoholism (poking fun at the “Demon in a Bottle” storyline), and the issue Deadpool #13 where Deadpool helps (read: annoys profusely) Iron Fist and Powerman back in the 1970’s.

But why can’t they just write about Deadpool in the current Secret Wars??

Okay, so what’s this comic about anyway?

It starts with a wounded Deadpool sitting amongst the charred corpses of the Marvel Heroes, musing to himself to not “pee in the cheerios of cosmic entities”. The scene then abruptly shifts to a few hours earlier where Deadpool stands amongst some of Marvel’s finest heroes (and Magneto) as they blatantly ramble off the exposition necessary to bring the readers into the story. This exposition is interrupted by Deadpool whom no one seems to know (as he was created seven years after the continuity of the comic they’re parodying). With this new found anonymity, and a fresh start, Deadpool tries to align himself with the Marvel Heroes (‘We’re all heroes here”), but constantly trips over himself as his propensity for gratuitous violence and murder overrides his other desires. 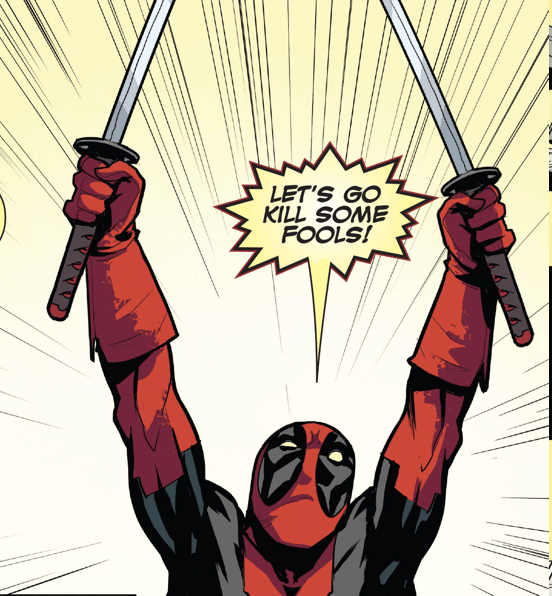 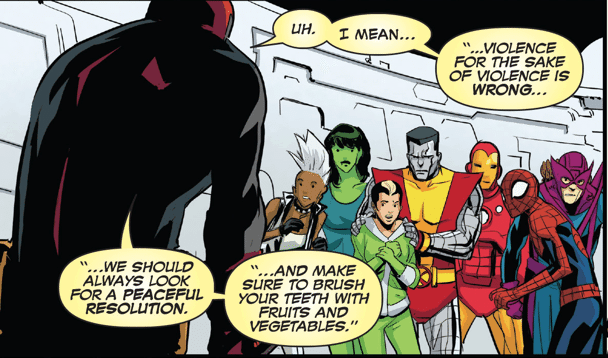 *Fun Fact: You can also eat fruits and vegetables*

However, the real challenge for Deadpool comes later as he squares off against the time travelling Kang the Conqueror, whom Deadpool stops from sniping Captain America (oooohhhh foreshadowing…..or a homage? Editor’s Note: Time travel is weird.) They banter for a little as Kang boasts of his mastery over time itself and of the “pre-determined” nature of their battle, but is promptly defeated as Deadpool dishes out a forceful kick to his “Time Junk”.

Post-battle, Deadpool reconvenes with the heroes who are still standing where he learns from a now non-paralyzed (!) Professor X that certain aspects of themselves have been “fixed” by the entities who brought them to Battleworld. For Deadpool this meant his pockets were now bulging with ammo, sardines, and big red chewing gum.

Flashing forward to the opening scene of this comic (in the relative future of the secret wars) Deadpool stands amongst the burnt bodies of the fallen heroes. It is with that scene that Deadpool’s Secret, Secret Wars ends, but not before the big reveal that not only was Deadpool “fixed” by being given ammo and food, but *SPOILERS* he was also cured of his cancer! The final panel of this comic shows a *hunky* moustachioed Wade Wilson determined to win the Secret Wars. 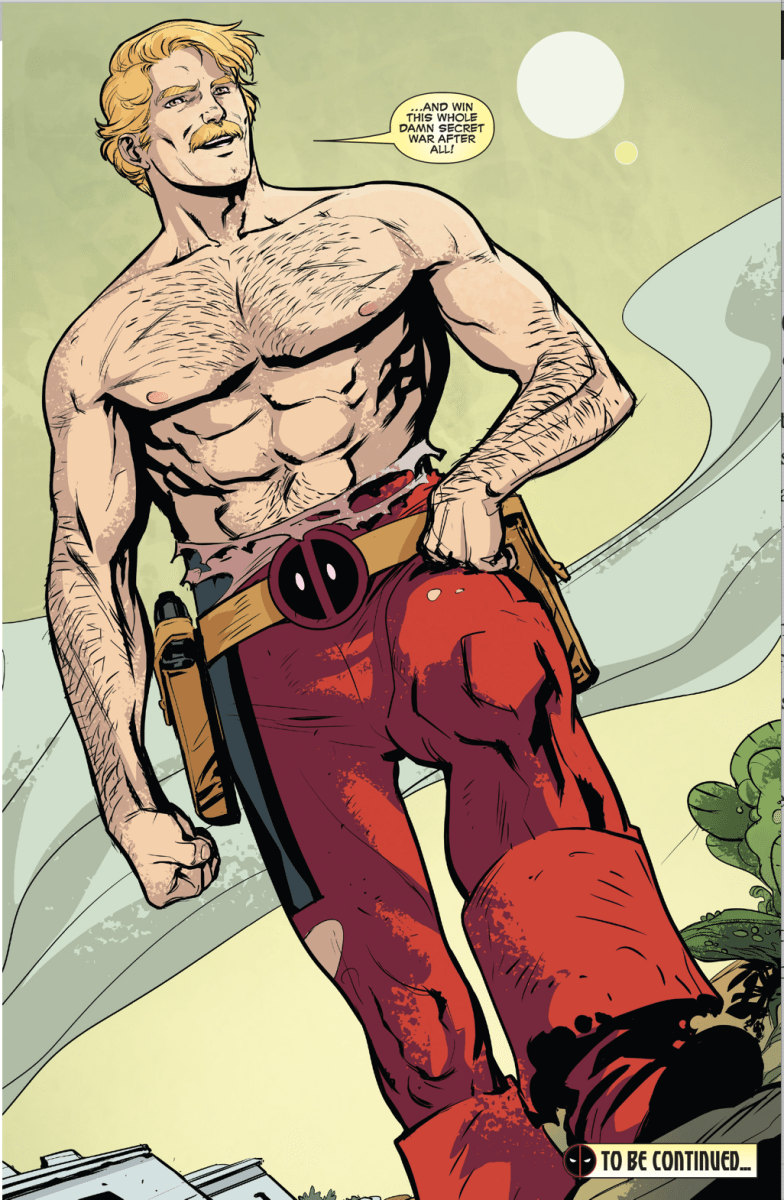 This comic also features a bonus story focusing on a “secret secret secret war” pitting Deadpool and some “D” list heroes and villains (Howard the Duck, She-Man-Thing, Frog-Man, Doop, Etc)  against each other. It’s a humorous story where the combatants task is to retrieve a prize (located at Deadpool’s preferred strip club) which ends up being a “participants” trophy. Initially dismayed by this lowly prize, Deadpool is further rewarded as Death (revealed as one of the puppeteers of the war) gives him a big ol’ smooch. 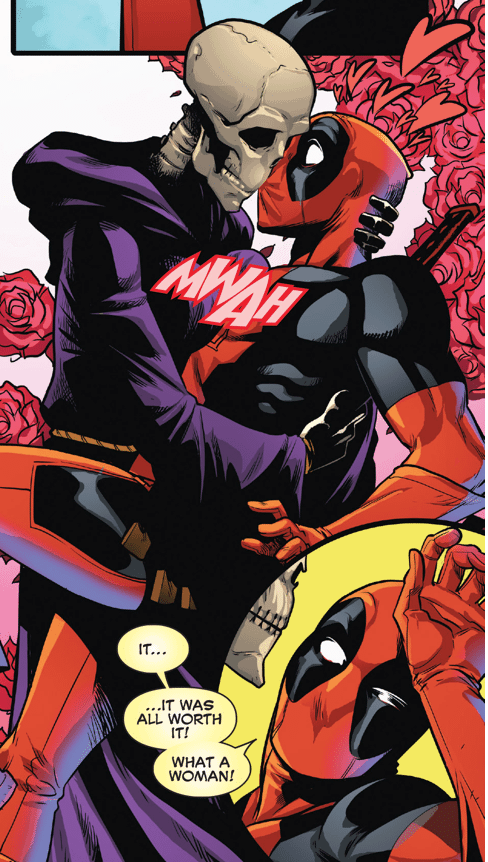 That sounds cool and all, but it’s non-canon….should I read it?

HECK YES YOU SHOULD! This issue featured some good ol’ fashioned Deadpool hilarity (a nice reprieve from the introspective and more contemplative Deadpool we’ve seen as of late). Not only this but it’s great to see Deadpool shaking things up in a story that many of us have already read, and know fairly well, creating a fresh take on an old story.

If nothing else, this issue gives us one of the funniest Wolverine lines to date, and dammit if I wouldn’t pay $5 to own the issue where Wolverine says:

*Shoulda saved some of your Healing Factor for that molten Adamantium shower….too soon?*

Love it? Hate it? Wish you had a life size cut out of a hunky Wade Wilson to cuddle with? Let us know in the comments below!