We’re less than two months away now, friends! I know, that’s still a long ways away until season eight. But there are plenty of fun news items this week to pass the time. Beware, though: there be spoilers in this here roundup.

Though she’s no stranger to the behind-the-scenes of warfare, Sansa Stark has yet to gear up for battle. But that may change in season eight. Sophie Turner told Entertainment Weekly that Sansa will finally get armor in the final season. It won’t be the chainmail or heavy metal ensemble of other characters, but instead a jet-black leather that Turner describes as “very protective” and “warrior-like.” As if the on-screen happenings of GAME OF THRONES weren’t gruesome and heartbreaking enough, David Benioff decided to answer a question that no one was asking.

Yes, Ser Pounce is dead. And Tommen’s beloved cat didn’t pass peacefully in his sleep. “Cersei hated the name ‘Ser Pounce’ so much she could not allow him to survive,” Benioff told Entertainment Weekly. “So she came up with her most diabolical [execution]. Ser Pounce’s death was so horrible we couldn’t even put it on the air.” Long live Ser Pounce. 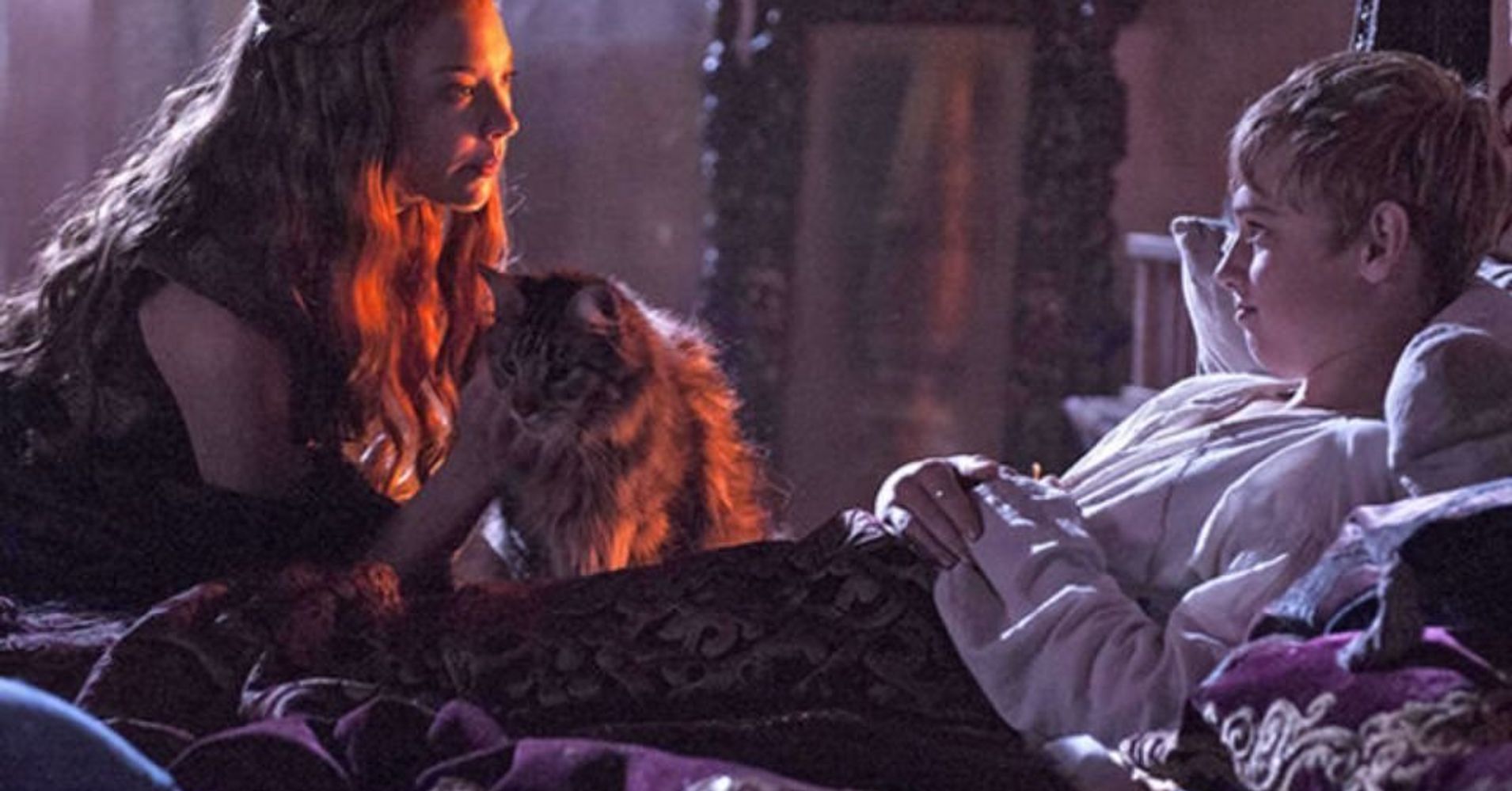 We know that the Belfast backlot got a major expansion for season eight, with full Winterfell and King’s Landing sets towering at Titanic Studios. Photos galore leaked during filming, but now Apple is giving us a sneak peek at the aftermath via satellite photos on Apple Maps. Spoilers apply, of course, but for the hopelessly curious like myself, a quick search for Titanic Studios on the Maps app reveals a decimated King’s Landing. Something powerful got to the city gates and the towers are suspiciously scorched.

Who’s Back in Action?

A leaked cast list for the season eight premiere appeared (briefly) on the HBO website before disappearing again. But the Internet is forever, so a screenshot lives on for us to dissect until April 14. All the usual players are on the list. But a few names could be spoilers for the season eight premiere. Two long-absent characters seem to reappear: Edmure Tully and Robin Arryn. Uncle Edmure (played by Tobias Menzies) last appeared in season six and has been a prisoner of Walder Frey since the Red Wedding. For all we know he’s still sitting in a jail cell after Arya wiped out House Frey last season, so his season eight appearance will hopefully bring closure to that storyline.

Robin Arryn (Lino Facioli) has also been absent since season six when he sent the Knights of the Vale to aid Sansa in the Battle of the Bastards. His reappearance may have something to do with Littlefinger’s (aka Uncle Petyr aka Robin’s stepfather technically) execution by Sansa, his cousin, in season seven. We haven’t had a petulant young lord making a mess of things in a while, so maybe we just had to hit our quota for season eight.

Also listed are Kristofer Hivju and Richard Dormer, who play Tormund Giantsbane and Beric Dondarrian, respectively. Both characters’ fates hung in the balance last season when the White Walker Viserion attacked the Wall. While they won’t necessarily be alive in the season eight premiere, the odds seem in their favor.

We’ve seen whiskey and sneakers, and now we’re diving into some new GAME OF THRONES merch tie-ins: makeup. Urban Decay cosmetics announced a GAME OF THRONES-themed collection on their social media. First images show — surprise surprise — fire and ice-themed makeup look. An Urban Decay rep told Glamour that the collection is “inspired by UD’s favorite places in Westeros and the strong women of the Seven Kingdoms.” Makeup fans can probably read the writing on the wall: a red/orange and blue/silver eyeshadow pallet, lip products vaguely related to characters like Cersei and Sansa, and some kind of complexion product that looks suspiciously similar to a product already in the UD line. 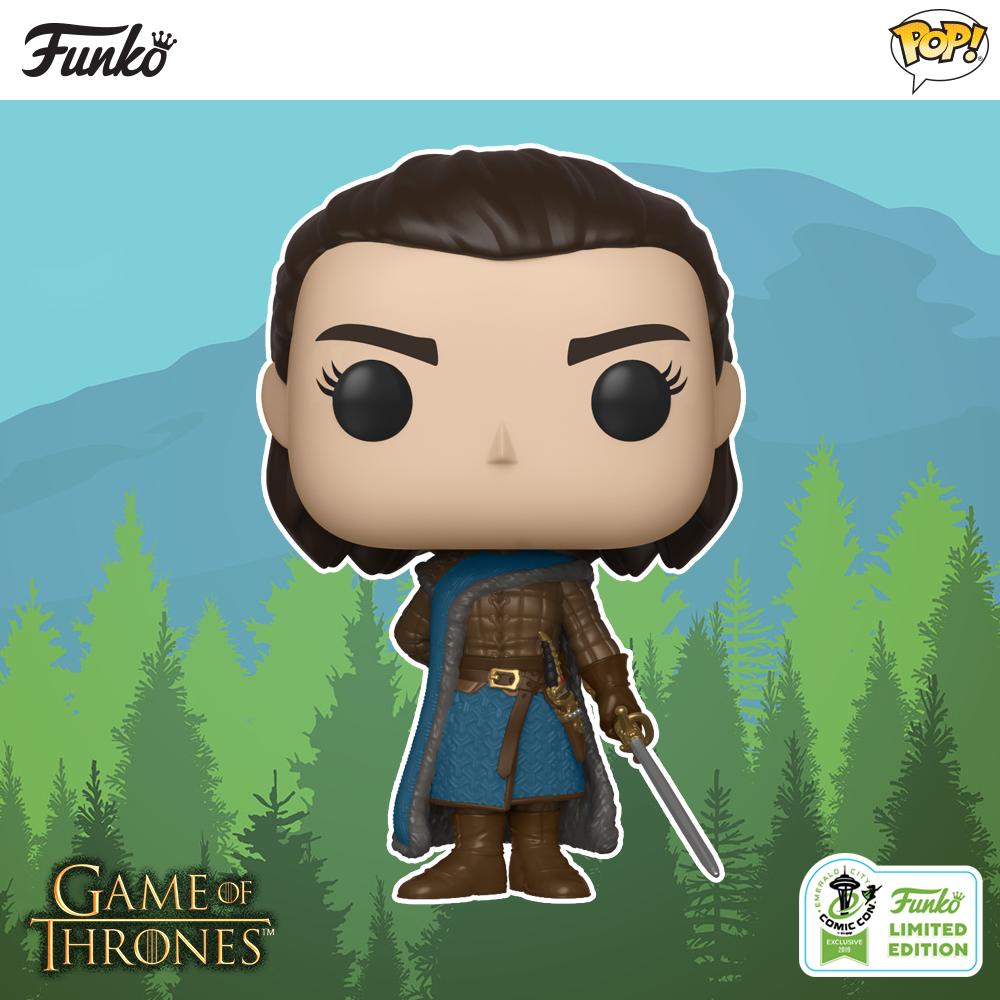 Another con, another release from Funko. This time it’s a new Arya figurine for Emerald City Comic Con. This Arya resembles her look from season seven, with Needle and her fabulous cape. For those unable to get the ECCC exclusive, have no fear! HBO has also released new merch. At the New York Toy Fair, they debuted a Daenerys Targaryen figurine from her time in Astapor, complete with whip. Other items include a 4-D puzzle and a $250 replica of Cersei’s crown.

We discussed the unorthodox marketing plan for GAME OF THRONES season eight last time, but now it’s coming closer to fruition. The “Bleed for the Throne” blood drive is on, partnering with the American Red Cross to give one donor a ticket to the season eight premiere. Likewise, Hulu is hosting its own “Binge the Game” contest. Hulu subscribers who register for the contest have until April 15 to watch as many episodes as they can.

Each season gets one entry and a whole seven gets an extra 10 entries. The grand prize is a trip to Croatia for two, airfare, luxury accommodations, and guided tours of GAME OF THRONES filming locations. On-brand is the “Create for the Throne” initiative. HBO asked 18 artists from different media like woodworking, sculpting, and painting to recreate famous GAME OF THRONES props. Submissions so far include swords, skulls, and ice sculptures!